Addressing the weathering effects of racism

Birmingham REP has found a formula that is not only strengthening mental health resilience among young Black men, but also tackling the systemic inequalities they face. Samina Beckford tells the story. 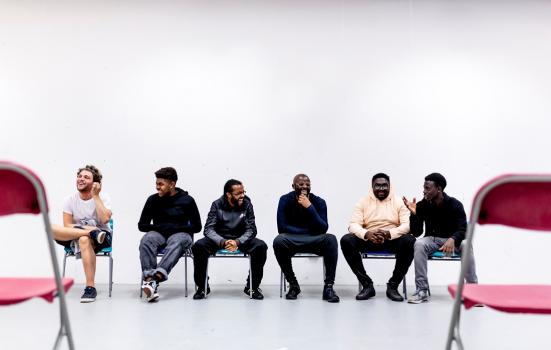 According to Centre For Mental Health report Against The Odds young African Caribbean men in the UK are much more likely than their White counterparts to develop serious mental illness, and three times more likely to be at risk of suicide. These shocking statistics led to the birth of Shifting the Dial, a National Lottery funded project using drama and spoken word to encourage discussions and explore mental health issues in young Black men.

Shifting the Dial is a partnership between Birmingham REP, First Class Legacy, Birmingham and Solihull Mental Health Foundation Trust, with the Centre for Mental Health acting as the project evaluation partner. We engage groups of young African Caribbean men in cultural activities run by The REP (Lightpost Theatre company) and First Class Legacy (Dear Youngers Project) at a range of places within Birmingham and Solihull, working alongside artists and facilitators who the participants can relate to, trust and can inspire them for their futures.

The project aims to strengthen the mental health resilience and wellbeing of the young men involved. It improves their self-esteem and self-belief, assists their personal development and life skills, increases economic opportunities, raises mental health awareness and encourages inclusion. Through the activities there is the opportunity to address the weathering effects of racism, discrimination, negative self-image and invisibility. The Centre for Mental Health trains peer researchers to be part of the evaluation, meaning the evaluation interviews and analysis are mostly done by volunteer young Black men.

The murder of George Floyd forced the world to sit up and acknowledge the systemic inequalities faced by Black individuals across the globe. Although the project was already at the halfway point, Shifting the Dial’s aims and objectives came into even sharper focus. The partners didn’t feel that a public statement or social media post was enough and, after a short struggle with a response that felt appropriate, the team developed a series of online, weekly events called Fix It Time to Breathe. This series, conducted over Zoom, addressed the topics of trauma, justice and healing.

Through our ongoing relationships with local organisations, Shifting the Dial is also addressing systemic racism within society by running quarterly Fix It events in which we invite young Black men, practitioners, community leaders and decision makers – from police officers to headteachers – to contribute to the discussion. Each session has a theme and so far we’ve tackled issues of employment, education, and healthcare. It is an open, solution-focussed conversation between attendees and partners on how we work together to instigate reform on each issue. This is then translated into actionable insight into how we can better protect young Black men. There is an expectation that after the sessions representatives will make a pledge on what they can implement in their own organisations to address systemic racism and support young African Caribbean men.

Success stories from the project are endless and there is a sense of pride from young men involved. Some of the first cohort of Lightpost members have now gone onto drama school, while others have become peer ambassadors or found other opportunities within the theatre. Two original members have gone on to permanently lead the group themselves. The project has nurtured the next generation of writers and directors, and the company’s next show, Constructed, is currently in rehearsal with a premier planned for early December 2020 at The REP.

Shifting the Dial demonstrates what can be achieved when a group of organisations work together to tackle the things that really matter to their local community. It's also a brilliant example of how theatre can work with other sectors to tackle some of the most pressing issues in our society.

Addressing the weathering effects of racism