How does it feel to have dementia?

The arts have helped scientists gain a better understanding of how it actually feels like to live with dementia. Julian West shares his experience of a research project based on ‘co-creativity’. 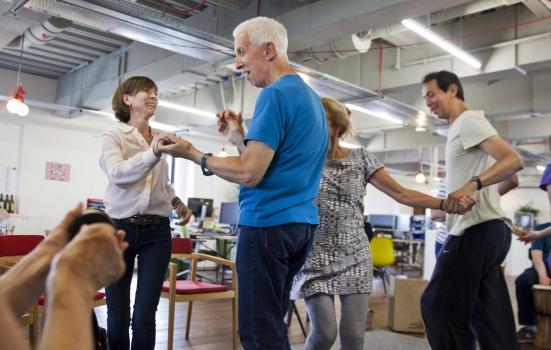 Three years ago, I received an email from a neuropsychologist, Sebastian Crutch, inviting me to meet him. Two things intrigued me. One was his use of the term ‘dementias’ (plural) and the other was that a neuropsychologist was asking for my expertise as a musician in helping to further an understanding of the condition. I have worked creatively as a musician with people living with dementias through the Wigmore Hall's Music for Life initiative, as well as developing projects for Glyndebourne Opera, Spitalfields Music and Magic Me, but this was the first time that a scientist had made such an approach.

Rather than thinking of the arts as a therapy, or as something that is used instrumentally, we wanted to explore the possibilities of engaging with people’s creativity

In the conversation that followed, Seb spoke of the ways in which science has developed ways of scanning the brain and measuring people’s responses to stimuli. What it can’t help us to understand is the subjective experience of how it feels for people living with dementias. For this, we need the arts and the ways in which they can enable ‘in the moment’ communication of our thoughts and feelings – often more eloquently than words. This is something that I have been exploring for the last 20 years.

I therefore became a co-director of an interdisciplinary group of researchers that included scientists, visual artists, writers, broadcasters, clinicians and carers. As Created Out of Mind, we were awarded Wellcome’s Hub award, a 22-month residency at the Wellcome Collection in London from October 2016 to July of this year. During that time, our central aim was to explore, challenge and shape perceptions and understanding of dementias through science and the creative arts.

Part of the team was Hannah Zeilig, a senior research fellow at the University of the Arts, London. Hannah and I had worked together before, and I had been fascinated by her work on cultural representations of dementia in the media and in the language we use when speaking about it.

Together, we were keen to explore the value that working with the arts might have for people living with dementias, and we were particularly intrigued by the possibilities of taking a co-creative approach. Rather than thinking of the arts as a therapy, or as something that is used instrumentally, we wanted to explore the possibilities of engaging with people’s creativity, and how that might expand our understanding of people with the condition as creative.

The term co-creativity is definitely a buzzword at the moment, but there is no unified agreement on its definition, and it is not yet included in the Oxford English Dictionary. There are also many similar terms used regularly – co-design and co-production – and it is not clear how these differ and are distinct from each other.

Francois Matarasso wrote a piece on the subject in a blog A Restless Art, which we found extremely useful. He suggests that in co-creative practice the distinction between the producer and the consumer is erased, citing the work ‘Bed’ by Entelechy Arts as an example. Hannah and I also spoke to a number of artists who identified their ways of working as co-creative, and some key features emerged: the necessity for improvisation, a flexible structure, a willingness to share leadership, and prioritising a shared creative process over any kind of product.

We quickly realised that in order to better understand how this might work with people living with dementias, we needed to run a project. ‘With All’ ran between January and March of this year at the Wellcome Collection. A group of musicians, dancers, researchers, people living with dementias and their friends and family met for a couple of hours each Wednesday afternoon to make music and dance together.

The only structure that existed was the time, place and room – everything else that happened was improvised. We suspected it would be important to work with professional artists with a high level of skill and confidence, and this was confirmed for us during the project. The three musicians (including myself) and the two dancers deployed their skills in ways that responded to the creative actions of our collaborators. In this way, improvised pieces were developed and crafted each week, with one action responding and building upon another. Crucially, each piece existed only in the moment – expressions of shared experience and emotion, with no need for memory or words.

By the end of the project, we had nothing tangible to show – no finished work of art or performance for a public. What we had created was a community of shared experience and understanding and an insight into some of the ways that the arts used co-creatively with people living with dementias can offer opportunities for connection, communication and agency. This challenges the predominant perceptions that associate dementia only with loss, decline and dependency.

Julian West is Head of Open Academy at the Royal Academy of Music.
www.julianwest.co.uk

The full text of our open access article ‘Co-creativity: possibilities for using the arts with people’ with a dementia can be found here.

Julian and Hannah are continuing to work together as Unmapped, combining research and artistic practice, working co-creatively with and for people who are often socially excluded.
Tw @beunmapped

How does it feel to have dementia?