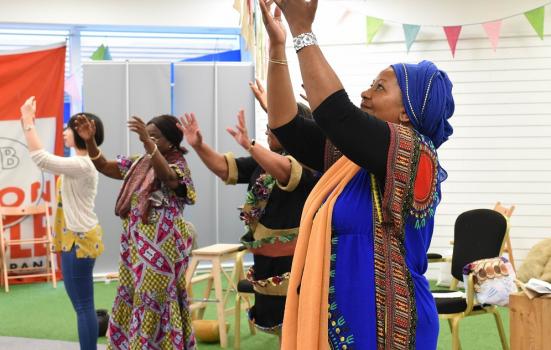 It is a hot June day. There is an audience of about 40 people looking on. Seven women sit in an arch facing the audience, holding pots, jars, trays of dried rice. They begin to tilt and shake them, creating a growing soundscape. One woman stands and enters the centre. I hope she will remember what she has written and plans to say. I hope she will be heard. I hope she is glad to be there. I am not sure.

“It’s good to show what we are capable of doing, not just lazing around…”

I am Project Facilitator on London Bubble’s Creative Elders programme. This has two strands, both offering older adults the opportunity to create and connect at ‘Bubble Hubbles’ dotted across Southwark.

The Rotherhithe Shed is our fully equipped workshop, open twice a week for people to come and tinker, make, fix and create. The other strand hosts Hubbles in sheltered housing units across the borough, where groups meet weekly for theatre-based sessions. The scene above describes my experience at ‘Origins and Ripples’, a public event to share and celebrate the creative products of these sessions.

At the Hubbles, theatre-making, movement and storytelling form the basis for connection and creativity. The most long-standing Hubble has been running since the pilot in 2013, and the most recent is now 16 months old. Workshops take place in the shared lounge space in sheltered housing units. Sheltered housing refers to accommodation that allows for independent living with the possibility for additional support. It is usually available to those aged 55 and over and commonly features help from a scheme manager and communal areas such as gardens or lounges.

We noticed that the communal spaces were rarely used and that residents, despite living in close proximity, were rarely spending time together. The presence of artists and the creative focus seem to build opportunities for connection.

This creative direction always comes from the participants. One group are very clear that they want exercise. In response, we designed a programme that explored dance forms from across the world and collaborated with a guest choreographer. They developed a dance using the actions that make up their everyday lives as inspiration.

Another group worked with a sound artist to create audio tracks featuring their stories and sound design. They explored the qualities and sounds made by everyday domestic objects and saw what stories they provoked when these sounds were distorted and exaggerated. What emerged included memories of milking cows in rural Scotland inspired by a distorted recording of static from a radio, and of running to the air-raid shelter as a child, a story that developed from hearing water dripping from a tap. Sped up, this sound from the participant’s flat now signified the patter of feet in war-time Bermondsey.

The longest-established group developed a piece of devised theatre. The process involved working with dried rice in each session, inspired by a story one of the group told about her father-in-law, a docker who was arrested for stealing when rice had fallen in his turn-ups. This provoked an enquiry into what role the most consumed of all perishable items had played in our lives, the labour of its production and routes of its distribution, memories of nourishment, childhood and family. The group shared stories, recipes and research that formed the content of a piece combining personal, local and global histories.

The pressure of performing

We felt it was important to bring these groups together in front of a wider audience to share and celebrate their creations. Beyond the social impact of meeting weekly, we felt that sharing stories and ideas - both across the groups and to a wider audience - was of artistic value. So on that hot day in June we gathered participants from three Hubbles, covering a 30-year age range, to share their work.

At times in the lead-up to the event I questioned the decision to bring the groups in front of an audience, albeit one that was going to be warm and generous. I worried about transport, performance anxiety versus wellbeing, process versus product, the chairs, memory, ownership, the audience and whether it would be a pleasurable experience for anyone involved. Some members, particularly those who performed ‘Rice Stories’, told me how uncomfortable the nerves had been. I questioned again our impulse to have this moment of performance, of revealing.

But this act of self-revelation and self-expression was a key theme when I interviewed participants a week later. One of them said: “It’s good to show what we are capable of doing, not just lazing around… That we can be very active and also contribute to other people.” She identified the moment of connection with an audience, “When you see people are laughing, you’re making them happy. It also boosts you because you are giving and they are receiving.” They were hearing direct responses from strangers. This was significant. A participant, who had shared an audio track and had been adamant that he didn’t want to perform, spoke with admiration about the skills of the other groups. Someone commented on the high quality of the acting.

It became clear that beyond the benefit of having others witness your creativity, witnessing that of others was inspiring. When I asked why the event had been important, one response was, “because it’s a lot of things people haven’t seen before and they take it all in and think of other things to do with themselves”. Performance, though just part of the process, is crucial to the act of sharing origin, of creating ripples.