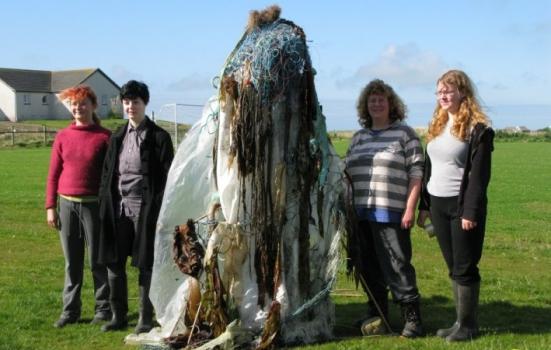 A Wilder Being, created by the University of the Highlands and the Islands and community organisations
Photo:

Are artists and academics kindred spirits? Sometimes they are the same people – splitting time between practice, research and teaching. More often though there’s something of a gulf between them – a space that can at best be a site of mutual fascination, and at worst a black pit of incomprehension. It’s a void that is often bridged by collaboration and that magic word – by partnership.

As with any relationship, the breaking points tend to come when people feel they are being taken advantage of or being taken for granted

I’ve often found myself acting as a broker of these relationships: a mediator between artists and researchers, and between universities and cultural organisations. As an art school drop-out turned academic, turned curator and festival organiser, I’ve probably got the right background to do so. But I’ve also learnt the hard way that partnership work isn’t always easy.

For the past three years I’ve worked on a festival called Being Human. It’s a national annual celebration of the humanities, established in 2014 by the School of Advanced Study at the University of London in partnership with the Arts and Humanities Research Council (AHRC) and the British Academy.

This year the festival has activities taking place in 45 towns and cities across the UK, organised by around 70 universities and higher education institutions, all responding to our theme ‘Hope and Fear’.

When we set up the festival we hoped it would provide a platform for non-academic audiences to engage with humanities research. In doing so, we also wanted it to act as a catalyst for creating partnerships between researchers and cultural and community organisations, artists and creative practitioners.

This year the programme features over 200 partnerships, which suggests that as a cultural matchmaking service, if nothing else, we are doing something right.

When partnerships go well, they can achieve amazing things. I remember an example from our first year when archaeologists from the University of the Highlands and the Islands worked closely with local community organisations and artists and filmmakers to create a Wilder Being, a sea monster based on archaeological research and the folklore of the islands. This creature has gone on to have an afterlife as an educational tool and art exhibit, and has travelled as far as Easter Island.

But partnerships can, and do, also go wrong. As with any relationship, the breaking points tend to come when people feel they are being taken advantage of or are being taken for granted.

When working with universities, cultural and community groups can feel like their already stretched resources are being exploited to provide the larger institution with a good news story. Similarly, individual artists and performers rightly feel exploited if expected to work for below their usual commercial rate.

On the other hand, researchers can feel as if their own creativity and autonomy is stifled by collaboration. They can feel that their ideas are diluted by being forced into uncomfortable frameworks, that authorship is endangered, and that they too ironically are expected to work for free to see a project through.

As has been noted by work done by the AHRC and ESRC Connected Communities initiative, partnership work between universities and community or cultural partners often exposes imbalances of power.

Universities are generally much larger and (even in the current climate) better resourced than those they partner with. At the same time they are also far less agile, autonomous and able to do things quickly.

It’s not surprising that things can fall apart.

So, how can you keep things on track? From what I’ve seen, heard and learnt over the past few years (often simply by learning from people with much more experience), successful partnerships hinge on three things:

Festivals can play a key role here. By providing a neutral and supportive framework for relationships to be created, or to be refreshed and renewed, festivals can act as mediators. They can provide an incentive to keep partnerships together, anchoring them as part of a larger project, and can act as a third party in the partnership that can step in, if appropriate, if things go wrong.

With the Being Human festival, we have often seen collaborations unlocking the artistic side of academics, and turning cultural partners into researchers, by becoming co-authors on articles that come out of projects.

I hope that we can continue to do that. We want Being Human to help guide people through the complexity of partnership work, to make the most of the creative messiness that can come with it, and maybe even unlock some unexpected sides of shared humanity on either side of the creative void along the way.