Still invited to the party

How can you attend a festival if you can’t leave your house? Michael Eades describes a project bringing the festival experience to people with dementia. 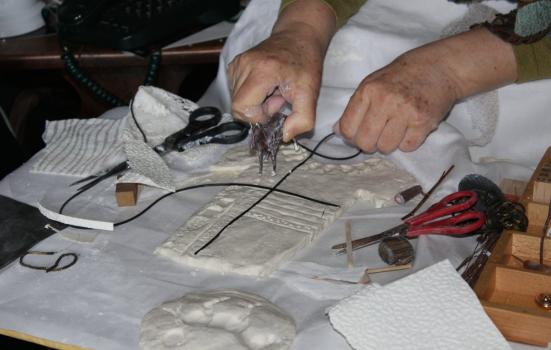 Festivals are collective experiences. They are meant to bring people together. But what if you get left out? Can you go to a festival even if you can’t leave the house? What about if you have problems with your memory and sometimes get lost on streets that you’ve known all your life? Are you still invited to the party?

These are questions at the heart of a project that I’ve been working on over the past two and a half years. In 2013 I received one of 70 research grants allocated as part of the Arts & Humanities Research Council’s (AHRC) Cultural Value Project. Working with the Bloomsbury Festival and Age UK Camden, my co-investigators and I received funding to investigate the impact of the arts on people with dementia.

Specifically, we were funded to develop and evaluate a pilot Festival in a Box outreach experience that would take a miniature, mobile version of the Bloomsbury Festival into the homes of socially isolated people living with dementia.

We worked with the Dementia Befriending Service run by Age UK Camden to identify people with dementia who might be interested in festival visits. We also trained a group of artists associated with the Bloomsbury Festival to adjust their practice to the very different setting of a stranger’s home. Two poets, an opera singer, a ceramicist, a photographer and a storyteller came forward.

Then, over the early months of 2014 we took the Festival in a Box, designed for us by architecture firm Lyn Atelier, on over 20 visits to people’s homes across Camden. People with dementia received bespoke performances based on their interests.

These included opera performances in their front rooms, ceramics workshops in their kitchens, poetry recitals enjoyed from the comfort of their armchairs. Over the weeks, the box itself became a small archive, building up a collection of research materials, audio transcripts and artworks created during the visits.

These visits gave people with dementia opportunities to tell their stories, prompted by engagement with cultural activity. In doing so it also prompted creative people to reappraise their own practice, their understanding of the communities of Camden and Bloomsbury, and their assumptions about people with dementia.

“I had the fear it was going to be really depressing”, one artist told us. “But of course it wasn’t. It was absolute joy.”

As we argued in our end-of-project report, festivals play a significant role in creating narratives of place. The initiative demonstrated that these narratives can and should be challenged by being brought into contact with neglected community perspectives, including those of people with dementia.

This process might allow festivals to help add meaning to terms such as ‘placemaking’ and ‘dementia-friendly communities’, both notions that have recently featured prominently, if loosely, in cultural policy discourse in the UK.

When our first round of visits finished in summer 2014 we began looking for ways to engage and share our research findings with other festivals and community arts initiatives. And so the box went on tour, popping up in various formats across the country.

In Yorkshire we participated in workshops as part of an initiative to turn Leeds into an age-friendly smart city. In Edinburgh we took part in Luminate, Scotland’s creative aging festival. At the Leeds College of Art we created an exhibition of materials and original artworks inspired by the project, seen by some 2,000 students starting their own careers in the arts.

The AHRC has just published the Cultural Value Project final report. It seems fitting that this year the Festival in a Box is coming back to Bloomsbury. With support from the St Andrew Holborn charity and Age UK Camden, we will once again be visiting the homes of people with dementia and inviting them to participate in this year’s Bloomsbury Festival.

I believe that any good festival should work hard to integrate the voices of those who are excluded and overlooked. Ultimately, I hope that is what this project has helped to do – to integrate the stories of people with dementia back into the larger festival narrative, and into the story of Bloomsbury itself.

The arts in a box