Joining up a city 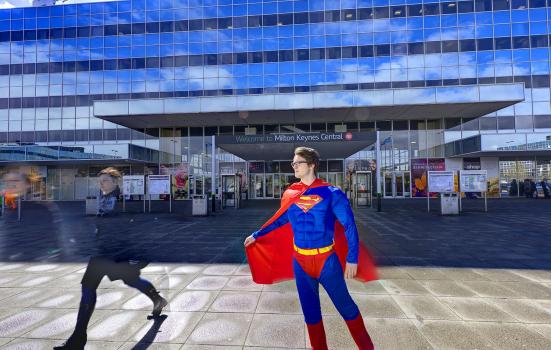 Milton Keynes is one of the fastest growing towns in Europe. A city by size if not by designation, its residents are proud of its distinctive and different approach to twenty-first century living. MK is growing up, turning 50 in 2017, and those of us living and working here continue the task of building a city set in motion by the founding pioneers.

The Stables is a 400-capacity venue in the village of Wavendon that sits on the boundary of Buckinghamshire and Bedfordshire. It’s also now at the heart of MK’s eastern expansion that will see thousands more homes, schools and businesses transform the rural setting into a distinct suburban location.

Most people drive through at speed without encountering anyone or exploring the historic villages, lakes and parks that are peppered throughout the urban landscape

But thanks to the visionary grid-based road system and its infamous roundabouts, the city centre has never been that far away. In fact, it’s pretty easy to get from one side of MK to the other in ten minutes in a car. And therein lies one of MK’s biggest challenges.

Most people drive through at speed without encountering anyone or exploring the historic villages, lakes and parks that are peppered throughout the urban landscape. For the visitor it can be a bewildering soul-sapping journey that’s quickly forgotten. For those who stop to explore, it’s a rewarding journey that is full of surprises.

I joined The Stables in 2003 and gradually found myself seduced by the place and intrigued by the opportunities and challenges that the city’s leaders face daily in helping to shape the future of MK.

MK has no shortage of ambition. It built a world-class stadium and found itself as a host city for the FIFA World Cup bid. It successfully hosted the Rugby World Cup last year and is now ranked as one of the UK’s top smart cities, testing new ideas, such as driverless cars, and pioneering new technologies.

In 2009 we worked up plans with MK Gallery to pilot an international festival in July 2010, underpinned by the idea that unusual events would be presented in unexpected places to surprise residents and visitors. We wanted to help people see Milton Keynes in a new light, challenge perceptions, step out of the ordinary and show how investing in the extraordinary is where MK’s future lies.

A festival is born

IF: Milton Keynes International Festival was born, featuring pop-up performances and installations in the boulevards, parks and retail spaces over ten days, with The Stables Spiegeltent providing the beating heart of the festival.

In launching the festival we knew we had to invest in the artistic work. Word of mouth and social media would play a huge role in establishing the audience base. We also knew that we needed independent evaluation to measure the impact of the festival so that the partnership of public and private supporters could assess whether there was merit in investing in future editions.

The evaluation in 2010 reported an audience of 90,000 and concluded that it had generated an economic impact of £4.5m (including bookings for 500 hotel rooms). Media coverage had generated nearly £400k worth of PR with features and interviews including The Times, the Guardian, BBC Radio 4 and Sky Arts.

The most impressive statistic of all was that 94% of people surveyed said the festival had improved their perception of Milton Keynes.

The evaluation work backed up the vibe on the streets and the stream of requests for us to do another festival. Following a lengthy period of consultation with all the partners and some soul-searching to figure out whether all the energy we had poured into ten days in 2010 could be replicated, we started planning IF: 2012.

A biennial model gave us time to build the unique partnerships that could enable new commissions of a scale suitable for the large, expansive MK landscape.

92% of people surveyed said the festival had improved their perception of MK, 89% said it was helping to raise its profile and 75% said that it had enhanced their sense of pride in the city.

One attender said: “It created more of a sense of a ‘joined-up place’ which I have often missed in Milton Keynes. It made me think of MK as an exciting place where inspiration can be found. At the few events I was able to attend, there were people who visited MK for the first time, and I am sure they left with the impression of MK as not just a green city, but an exciting place.”

The festival is changing the way people think about MK and the way people engage with arts and culture in the city. We were then invited to deliver the city’s showcase event to celebrate the Rugby World Cup last year. Over 12,000 people turned out to see Clash of Drums/Danbor Talka by Les Commandos Percu and Deabru Beltzak, and England Rugby congratulated the city on staging one of the most spectacular and successful cultural events of the whole tournament.

All of this has helped edge MK towards a bid to host the European Capital of Culture in 2023. Some might say it’s audacious, but that’s what they said about the FIFA World Cup and Rugby World Cup bids.

Monica Ferguson is Chief Executive and Artistic Director of The Stables and IF: Milton Keynes International Festival.
www.stables.org
www.ifmiltonkeynes.org

Joining up a city
New look