Through the lens of digital art

The recent explosion in digital creativity has thrust the arts into the worlds of climate science and wind forecasting, cyberfeminism and many more surprising places, says Tom Higham. 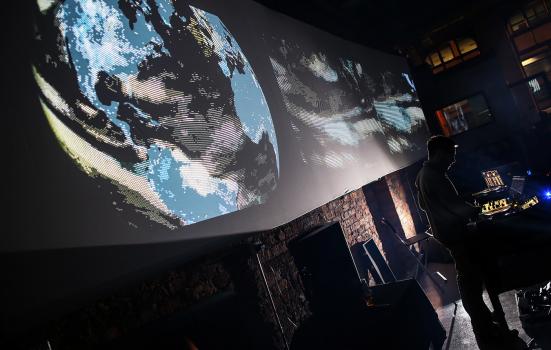 In recent years innovation has become a loaded and somewhat tired term. On the one hand, it’s associated with white men and post-it notes, and it’s a buzzword de rigueur, almost as ubiquitous as ‘digital’ was ten years ago. On the other, it remains central to a small but growing part of the arts sector, and most certainly digital and new media arts.

For the past 21 years the FutureEverything annual conference and festival has looked at big questions facing society through the lens of art and digital culture. Taking the theme of ‘Less and more’, we explored how we can rethink our resources, looking in depth at some key fundamentals, and exploring how they can be used in unexpected ways related to earth, life, intelligence, community and uncertainty.

The arts sector in all its forms and niches is crucial to us understanding, playing with, interpreting, interrogating and simply prodding the future

We looked at sharing economies, wind forecasting into months and years rather than hours and days, the use of social and digital media by ISIS, cyberfeminism, poetry and lab-grown meat. All explored in depth to try to find creative and innovative solutions to fundamental problems and inequalities in our society.

The conference took a range of experts to task, spanning biology and physics, artificial intelligence and climate change. To me, the fundamental reason the conference has lasted the test of time is that artists, and the arts sector in all its forms and niches, is crucial to us understanding, playing with, interpreting, interrogating and simply prodding the future.

To explore some of the issues I’d like to draw a couple of seemingly tenuous comparisons. First, in our session on ‘Community’, Mat Leung from Assemble outlined their approach to developing projects, and an unease around the homogenised, sanitised and simplified unity of perspective that the term ‘community’ has come to denote: “The term community is difficult because it assumes a single kind of identity, but together we wanted to interrogate that.”

The approach Assemble outlined here perfectly sums up a lot of our recent work around smart and future cities. Cities, communities and urban life are complicated, multi-layered and messy – and that messiness can and should be embraced. Other words for it include diverse, creative, serendipitous and enriching.

For years we’ve been advocating the smart citizen, rather than the smart city, and exploring things like the digital public space. Without the nuance Assemble understands, and respecting and nurturing the vibrancy and creative potential of a large number of people living in close proximity to each other, visions of smart and future cities very quickly look decidedly dystopian.

A friend based in Holland recently expressed some alarm at an article by Jonathan Jones in which he states that art and science should stay well away from each other. That prompted the next comparison I’d like to draw, which is between climate science and digital art.

We launched Project Ukko at the festival, which is an online interface and visualisation representing a huge amount of intensely complex and rigorous scientific data, gathered over decades by a huge network of Europe’s leading meteorological institutes.

I believe the explosion in digital creativity has thrust our little backwater artform into the main room, front and centre

This data, and the insight gained from it, is potentially transformational. It can help to reflect and show patterns in changing wind conditions around the world, which, if understood and shared, could make enormous impact on the decision-making processes of the wind energy sector, flood defences and disaster relief. A long-term and rigorous collaboration between climate scientists, data artists and a small UK digital culture organisation made that possible.

Innovation is not about technology but about collaboration, new approaches, and figuring out the really important questions, as much as finding answers to old problems.

Over recent years the festival has built an extremely loyal, growing, international audience and I think it’s interesting that a festival dealing with digital creativity and new technology continues to attract a stable and loyal physical audience.

After all, with shiny vimeo embeds, podcasts and articles like this, it’s never been easier to keep up with what’s going on. Start posting to Youtube and you’re a filmmaker (or at least a Youtuber). Buy a Raspberry Pi and you’re a creative technologist.

Rather than dilute the precious canon of digital art, I believe the explosion in digital creativity has thrust our little backwater artform into the main room, front and centre. There are more and more examples of media artists securing major gallery shows, tours and commissions.

I don’t believe the reason FutureEverything has survived is the same as the theatrical or cinema rationale of the magical pull of the event, or experiencing things with others in a large dark room. I think it’s indicative of a changing dynamic in the way people want to experience culture.

There’s certainly a generational divide here, but I believe audiences now want to participate and create, no longer just consume. As obvious as that may sound to some, it’s a million miles away from the ‘hard broadcast’ dynamic that dominates huge swathes of our sector. Here’s hoping festivals and events that engage, involve and focus on their audiences and their communities will continue to flourish.

Through the lens of digital art