Artistic and Creative Director of Wales Millennium Centre, Graeme Farrow pays homage to those who have inspired him over the course of his career. 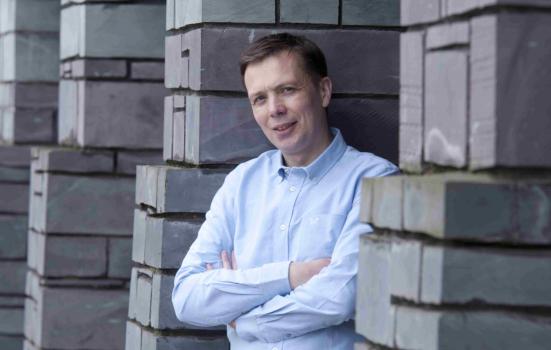 Frank is probably the artist I have most enjoyed working with, partly because he’s incredibly nice. Somewhere in him there must be a monstrous ego screaming to get out. When he was being interviewed on the morning of the London 2012 opening ceremony he was asked to describe it in one word. He answered “generosity”. A generosity of spirit defined ‘The Return of Colmcille’ which he created with us and Walk the Plank for the Derry~Londonderry City of Culture programme [Graeme was Executive Programmer]. It was a true highlight and recently won Best Outdoor Event at the Event Awards. It sounds a little out of step in an age of instrumentalisation in the arts and culture business, but I work for a national arts centre and generosity should be at the heart of Wales Millennium Centre’s aims. We make money, but we do so in order to be generous – to inspire our young people, to provide excellence, to bring people together, to provide leadership, to give something to the nation…

Speaking about Colmcille, Frank quoted George Orwell: “Nothing ever stands still. We must add to our heritage or lose it, we must grow greater or grow less, we must go forward or backward.” As a national arts centre, Wales Millennium Centre also has a responsibility to grow Wales’ heritage – to retell great stories and create new ones, to help to define our national identity. I believe that the arts can help communities of people to grow greater.

Shona McCarthy and the Derry~Londonderry City of Culture team

The success of the first UK City of Culture in Derry~Londonderry was in no small part down to Shona's leadership, and the passion and tenacity shared by her and the team. Shona was tenacious, a good quality to have in this business, and she remained a positive motivator even when dealing with very difficult issues. I have a huge amount of respect for my colleagues in Derry and the place will always occupy a big place in my heart.

Artists such as Hofesh Shecter and Frank gave an inordinate amount of time and commitment, Helen Marriage and Artichoke were also brilliant and very (!) tenacious, and Tate was fantastic to work with. Many of the aforementioned remarked that the experience changed them as practitioners. That is because they immersed themselves in the place. Leadership is infectious and artists know it. When I was leaving, Shona sent me a card. Muhammad Ali was something of a guru to both of us. It was an Ali quote card which read: “Champions are made from something they have deep inside them: A desire, a dream, a vision. They have to have last-minute stamina, they have to be a little faster, they have to have the skill and the will. But the will must be stronger than the skill.”

We had the will.

I don't know Jude that well but as a fellow artistic director of a national arts institution I admire her greatly, and did so in my previous job as Director of the Belfast Festival. The South Bank is similar to Wales Millennium Centre in some ways – we are both home to several resident partners including orchestras. South Bank feels homely to me. Jude let the air in I think, and made it home to many people who might have considered the place a bit daunting. Families in particular. It is my ambition that people in Wales from all ages and backgrounds will consider Wales Millennium Centre to be their home.

She also festivalised the programme. One of the first things you realise taking up a role in a very big venue is that there is only a certain amount you can do to influence what happens on your biggest stage. You can do a lot of important work elsewhere though and shouldn't just think in terms of your performance ‘boxes’. It can be confusing too, but the last thing you want is for the audience to be confused. You need to take them on a journey and festivals are one way of doing this.

I'm writing about Nic partly because I just watched an encounter between him and Mike Leigh on the subject of Turner on Newsnight. It was riveting and gladiatorial. He can come across as quite cerebral but there'd be something wrong if he didn't. Ferociously intelligent is how I found him on the few times I met him. He is incredibly passionate though, and his sheer love of the artists he champions is powerful.

Tate isn't cerebral, it is accessible. I can't help but admire a man who has done so much to make contemporary art accessible to such a huge audience. Bringing the Turner Prize to Derry was a typically bold Serota move. It paid off in spades. The nominated artists noted how local audiences spent more time with their work than in other galleries around the world. I am a fairly ordinary lad from Sunderland. I am driven by the fact that if I can enjoy contemporary artforms then anyone can.

Mr Weston was a pretty fearsome French teacher at my secondary school. It was a Catholic all boys comp and he had a penchant, as did others, for throwing blackboard dusters and such like at the unsuspecting heads of the unfocused. He sort of took me under his wing though, and practically force fed me Camus (I'm afraid so) to try to get me to think about what the hell I was going to do with my life. I am almost certain that plays such as Anouilh's Antigone and Cocteau's La Machine Infernale weren't on the curriculum as such, but he made us study them and even took us to see a play. It was the first time I'd ever seen one and although it would have been deeply uncool to admit it at the time, I kind of enjoyed it.

As gurus, of course, all of the above pale into insignificance compared to my wife and mother of our three children, Gillian Mitchell, who is currently Director of Programmes at the MAC in Belfast.

Land of song
My Gurus