Learning from the French

Working with some of the best French contemporary circus companies has raised the bar for our own version of the artform, says Gavin Stride in conversation with Catherine Love. 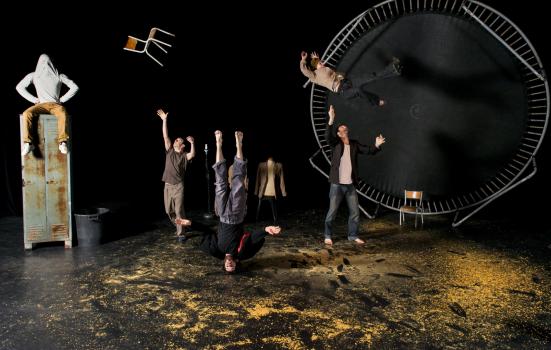 'Off', performed by Cie Kiaï
Photo:

“There’s still a view in the country that if you say circus most people in the street will think of white clowns and animals,” suggests Gavin Stride, Director of Farnham Maltings in Surrey. But over recent months, thanks to a major European collaboration, the venue has been challenging this perception. The contemporary circus initiative PASS is based on a more European view of circus than perhaps we have in the UK, and the project has partly been an attempt to reinvent that traditional artform. Set up in 2012, the three-year collaboration has supported cultural exchange between contemporary circus performers in northern France and artists and venues in the south of England, with the aim of developing the artform and audiences alike. The English PASS partners are Farnham Maltings, Activate Perfoming Arts, The Lighthouse and Seachange Arts, while the French organisations they have paired up with are La Brèche, Cirque Jules Verne, La Rennaissance and Conseil Général de la Manche.

Stride explains that Farnham Maltings became involved with the project because of the potential to build new audiences. He feels that circus is quite democratic as an artform: “It’s very accessible, it reaches a much broader audience. It feels like it’s rooted in a popular form closer to carnival or spectacle. It has the potential - partly because of its vocabulary because it tends to be more physical - that you can play to a much broader audience.” The other motivating factor was the excellence of contemporary circus in France. “The French are way, way better at it than we are,” Stride puts it bluntly. “For us it was about raising the bar for contemporary British circus.” On the other side of the exchange, Farnham Maltings and the other English venues involved in the collaboration have shared their expertise around audiences and touring.

Funded through the Interreg IV programme, PASS has enabled the delivery of performances, tours, residencies, presentations and professional development. Most recently, French ensemble Cie Kiaï toured Off (pictured above), a hybrid circus and dance show based on Oliver Sack’s ‘The man who mistook his wife for a hat’, through a touring initiative in the south east of England managed by house. In the past, the partnership has facilitated skills sharing residencies involving French and English artists, including a collaboration between Camille Boitel’s company L’Immédiat and Little Bulb Theatre (produced by Farnham Maltings). Stride is confident that the links established over the three years of PASS, such as that between L’Immédiat and Little Bulb, will outlast the project and lead to future creative work. “The residencies process is madcap but it produces something astonishing at the end of it all.”

The collaboration has, however, revealed crucial differences between the two performance cultures in England and France. Contemporary circus in France is better subsidised and arts provision in general is more concentrated than in England’s widely dispersed and varied system. The French seem to have, by and large, a much stronger and smaller arts infrastructure. So the idea that you can go to small market towns where there are arts centres or theatre spaces that might get a local audience was a surprise to many of the French companies. The other major difference that Stride has noticed over the course of the project is the status of the arts and the artist within the two nations involved. “The place of art in our lives is very different from the place of art in French society,” he says. “My sense is that the status of the artist in French society is much higher and the artist has the right to make whatever they want to make, and then the administrators and audiences just have to go and see what the artist has made. Whereas in this country our artists are much, much more focused on the needs of the audience from the beginning.” What this has offered is an opportunity for each country to understand and begin to learn from the other. “I think that’s why all those European projects work,” says Stride, “it’s that they’re about developing cultural understanding.”

The most important lesson to emerge from the project, Stride suggests, is one that had already entered the bloodstream of the organisation. “I’ve relearnt something that I knew anyway, but it’s never a bad thing to be reminded: that relationships take time, trust, generosity, patience, and that you can’t phone these things in. If you get it right then the payback is much better than just aiming low.”

A simple start
Learning from the French
International travel
Touring back on track?