Charlotte Gregory describes how a cross-border, Interreg-funded exchange has shared the French passion for contemporary circus. 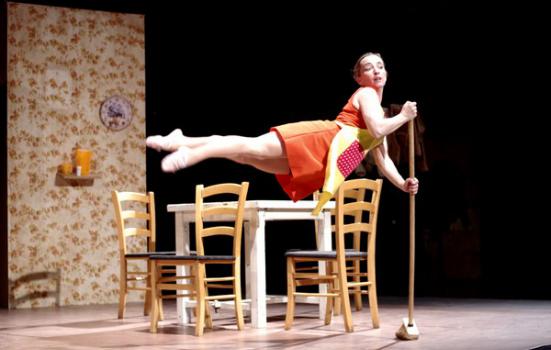 ‘PASS − The Circus Channel’ is a unique European-funded project through Interreg IVA linking four British and four French partners in a contemporary circus arts exchange. Interreg is regional, cross-border funding, and thus the partners are from the southern coast of the UK (Lighthouse in Poole, Activate Performing Arts in Dorset, Seachange in Great Yarmouth and Farnham Maltings in Surrey) and the northern coast of France (La Brèche in Cherbourg, Cirque Jules Verne in Amiens, La Rennaissance in Caen and Conseil Général de la Manche in Upper Normandy).

All the activities we deliver under PASS are based on the principle of Franco-British collaboration and follow a successful pilot on a much smaller scale in 2010 called ‘Cross Spring’. The current project was set up in 2012 and runs until 2015. The project allows us to deepen our understanding and knowledge of contemporary circus artforms, artists and companies, given that on the other side of the channel the genre is much better understood and known. My impression is that your average French person knows there is a whole world of contemporary work out there beyond the much respected Cirque du Soleil: work which is poetic, innovative and challenging. In France there are 12 specialist circus centres, Les Pôles Nationaux des Arts du Cirque (PNAC), whose job it is to develop and support the genre.

La Brèche is a circus creation centre in Cherbourg and is the lead partner on the project. The partnership with the organisation feels particularly pertinent to us at Lighthouse, as our two towns are twinned and also linked by the cross-channel ferry service. On a clear day we can almost see to wave at them across La Manche.

While the arts are heavily subsidised in France, one of the most significant differences is around funding models. With French government funding usually forming around 80% of their income, our partners are intrigued at how we manage to do so much with just 20% in funding support.

As well as being able to programme international work, often as UK premieres, one of the major benefits of the project for us is the way in which it allows us to invest in our organisation and artform, which would not normally be financially feasible. Traditionally Lighthouse is a receiving venue, but through PASS we are able to invite circus artists and companies to spend time with us in residency, giving them space, time and a fee to develop their practice and ideas for forthcoming shows. This generally happens in our quieter programming months of August and January. We are even able to take this a step further: we are currently looking at a new commission for 2014, initiated by us, which will bring together a British physical theatre company and a French circus company to create a family show, very much mimicking the French ‘co-production’ model. We are also running a technical exchange for our team with the French partners, and hope that as a result we will have a number of technicians in-house who are specialist in aerial rigging.

Being a Francophile, I enjoy the cultural and social learning I get through the project, almost as much as the artistic discoveries I make along the way. For example, the way in which marketing copy from companies needs to be translated, not only in terms of language but also culturally. What seemingly makes a French theatre-goer want to buy a ticket is not true of their British counterpart. For both marketing and performance we also have to make decisions about what to translate and what is better left untouched in its full French glory for our audiences to unpick.

At Lighthouse, our circus work is all linked under our ‘Carte Blanche’ banner, and in 2012 we invited Gandini Juggling, Pirates of the Carabina and Le Prato to perform.

As part of PASS we also deliver a family circus fun day once a year, which has multiple functions as an open day, an audience development strategy, an artists’ training opportunity, an outreach programme and a staff bonding exercise. Last year 4,000 people came through our doors to take part in and experience contemporary circus. This day-long, free programme of workshops and performances, all with a circus theme, takes place across the building in foyers, backstage, in studios and performance spaces. We also programmed satellite performances in our neighbouring shopping centre.

With some circus residencies and work-in-progress sharings already under our belt, we are now looking forward to hosting Hors Pistes company, which will be performing its show ‘Ordures et Ménagère’ (our translation is ‘Mr and Mrs Anybody’) in late June. Clearly a French company does not want to come all the way to the UK just for one show, so we have teamed up with Dorchester Arts Centre, which will present the show at the Corn Exchange. Our PASS Partner Activate is then bringing the production back to the UK in September for a South West rural tour with ArtsReach. Thus the PASS programme is not only growing our international relationships, but strengthening our local ones too far beyond the initial project, allowing us to work creatively to develop audiences for contemporary circus in the region.

Interreg funding is a challenge to apply for, get and administer. However, the benefits of working collaboratively with a different culture are immense, not only for the organisations involved and professional personal development, but for the artists and audiences who are able to benefit from this project.

Charlotte Gregory is Project Manager for PASS – The Circus Channel at Lighthouse in Poole.
www.lighthousepoole.co.uk/pass