Cara Courage says ‘Art Cities of the Future’ only scratches the surface of new arts locations, but is still a comprehensive compendium to the new wave. 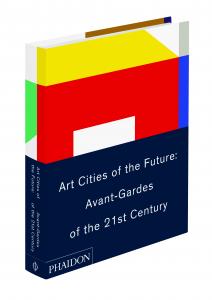 Calling for a change in the art cities guard and for a toppling of the established seats of art power in the developed and Western world, ‘Art Cities of the Future’ is a clarion call for the global gaze to be turned elsewhere and for a heralding for a new wave of practitioners. The scenes of New York, London and Paris are explicitly named as redundant, the attention given now to work emerging from elsewhere, specifically Beirut, Bogota, Cluj, Delhi, Istanbul, Johannesburg, Lagos, San Juan, Sao Paulo, Seoul, Singapore and Vancouver.

The format is a thorough one. A chapter is given to each city, with a contextual introduction written by a city-insider, giving insight into the cultural, social and political milieu the artists then profiled are working in. The profiles are image-rich and address the working methods and purposes the artists employ. The cities included are ones that are experiencing massive social or political change, and the artists included are both precipitative and reactive to it. The work shown in the chapters cannot help but be political – a visual reading of the images gives a tour of unrest and protest across the globe. This is done in many forms, from the reappropriation of space by Doris Salcedo in Istanbul, filling a vacant block space with chairs to the third storey, to the subversion of received visual images of migrant workers by Vertical Submarine in Singapore.

The works presented are diverse and the book is better for it, across its 320 pages is presented a compendium to a new wave of global contemporary art. If the artworks share a common thread, it is the urban lived condition, as a manifestation of the built environment, such as Gigi Scaria’s cityspaces and large-scale installations in Delhi – a direct response to the cities’ hectic urbanism; to social relations, such as Gareth Moore repurposing a corner shop in Vancouver to be based on equitable material and social exchange; through to social justice, such as activist-artist Jelili Atiku’s performative and – to passers-by – disturbing pieces that call attention to the politics of the marginalised.

The book claims to “dig deeper into the source of creativity… discovering twelve distinct avant-gardes”. Whether or not the term avant-garde sits well with a Western mind that positions this movement in the past, the work presented certainly achieves the avant-garde aims of being experimental, risk-taking (for some, a massive risk to their personal safety and freedom) and radical. These are works that set out not just to comment or reflect, but to agitate and criticise. As with the avant-garde, the works advocate for an art produced from experience, done for the people, not for the formal art sector or market.

The terms of reference used in the book delineate that an ‘art city’ requires not just the presence of an arts scene, but an arts biennial. This seems contra to the assertion that these cities are ‘of the future’; the scenes are established to a larger degree to have a biennial, the infrastructure is developed and the artists have established, for many, international careers. Whilst the listed cities undoubtedly map the change in location of global art production, this is a mapping of a formal arts sector nonetheless, the biennial a product of a marketised art world and of competitive city marketing.

The semantics of the title though are rendered redundant when one sees the work included in the book – this is art that is happening now, that is an urgent and vital commentary of the lived experience of those within the city, and a critique by contrast of the art cities that have dominated the global arts sector for perhaps too long. As these cities take their place on the global stage, so too do their artists – ‘Art Cities of the Future’, whilst scratching the surface of these new arts locations, is still a valuable and comprehensive compendium to the new wave.

Cara Courage is an arts and culture consultant.
www.caracourage.net