Helen Marriage reports on her first six months at Harvard on a Loeb Fellowship and explains the practice of ‘placemaking’, something she would love to see over here. 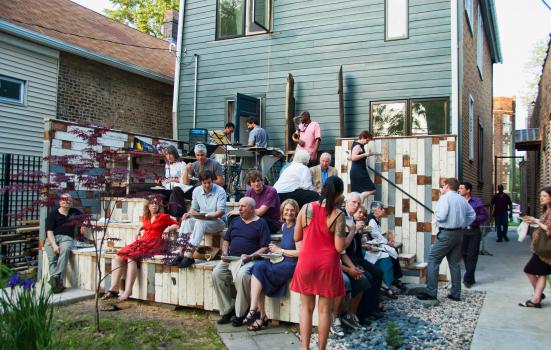 19 August 2012: the UK’s triumphant Olympic Games are over; London is gearing up for its next sporting extravaganza in the form of the Paralympics; the 2012 Festival is just past its half-way mark. The team at Artichoke, the company I co-founded in 2005 with Nicky Webb, took a well-earned rest following the punishingly complicated logistical operation that was Deborah Warner’s ‘Peace Camp’, and is now working on Lumiere, a light festival, to take place in Durham and Derry-Londonderry at the end of this year. And me? I was on a plane to Boston. Not for me the agony and ecstasy of opening and closing ceremonies. I am quietly slipping away to embrace a new and daunting set of personal challenges – thinking, learning and reflection.

I had heard last April that I had been awarded a Loeb Fellowship at Harvard’s Graduate School of Design (GSD). Harvard is organised with an undergraduate college, surrounded by specialist graduate schools, ranging from public health and medicine through to law, business, politics and divinity. Started in the 1600s with nine pupils and a single master, Harvard is now regarded as one of the world’s greatest universities and is certainly one of the richest. Figures for 2011 show that while students contributed 20% of net income, and grants made up a further 22%, the balance − a whopping 56% or $2bn – came from gifts, either current or historic. There is a culture of giving in the US that is endlessly surprising to those of us from the other side of the ocean.

My own fellowship is a remarkable example of the generosity of a single American couple, John and Frances Loeb. John had become Chairman of the Development Committee at the GSD in 1968, a year of unprecedented turmoil in American cities. His committee produced a fundraising booklet called ‘Crisis!’, ostensibly describing a state of urban and social disarray, while obliquely making reference to the GSD’s own parlous financial situation. The booklet spoke of “the chaos in our cities, the loss of control over our environment, the urgent need for leadership for the future”.

The Loebs decided that part of their personal contribution to the capital campaign and the developing crisis across the nation would be to endow a fellowship programme which would bring mid-career practitioners with an interest in urban life to Harvard and allow them to ‘have the run of the place’ for a year. They were convinced that a year of independent study, reflection and engagement would send these emerging leaders back to their work with a renewed sense of purpose and passion. They foresaw Loeb Fellows forming a powerful network across the country, together tackling the social and political stagnation of the American city. Originally restricted to US nationals and largely aimed at architects, planners and landscape architects, the Loeb Fellowship in 2012 reflects a broader spectrum of interests addressing challenges that face our urban and natural environments. In recent years the programme has expanded to include practitioners from 15 different nations and ranges from journalists and bloggers, activists and artists and now people like me, with indeterminate professional qualifications and a jamboree bag of skills, but with a deeply felt desire to demonstrate the power of the artistic imagination while mucking about in public space.

That is how Artichoke’s work often appears to be seen in the UK: artistically imaginative, hugely popular with audiences, technically accomplished with high production values, intense, volatile, slightly dangerous – but not intellectual and certainly not serious. Never really cutting it in terms of critical discourse, not fitting neatly into any categories, not quite performance, not theatre and definitely not visual art. Even poor Antony Gormley whose ‘One and other’ was produced by Artichoke, was described thus: “Gormley, … appears on the evidence of ‘One and other’ as someone who… is annexing fashionable intellectual territory and giving it a bluntly populist spin. He is playing on exhibitionism and producing, in effect, art-as-spectacle or a slightly classier Big Brother.” (1) Woe is he who touches the hearts of the masses, ignoring the exclusivity of the brains of the elite…

So imagine my surprise, on touching down at Boston’s Logan Airport, to find an arts and intellectual community awash with curiosity about the power of Artichoke’s work through its occupation of the public domain. ‘Ephemeral urbanism’, ‘Art, design and the public domain’ and ‘Art as ecological healing’ are just a few examples of courses offered by some of Boston’s 113 universities and colleges. And ‘placemaking’. So many courses on this mysterious thing called ‘placemaking’. Not regeneration in the sense that it is understood in the UK as a 1990s top-down initiative to rebuild distressed or derelict areas, placemaking is described by the Project for Public Spaces as: “a multi-faceted approach to the planning, design and management of public spaces... it involves looking at, listening to, and asking questions of the people who live, work and play in a particular space, to discover their needs and aspirations. This information is then used to create a common vision for that place. The vision can evolve quickly into an implementation strategy, beginning with small-scale, doable improvements that can immediately bring benefits to public spaces and the people who use them”.

So where do the arts come into this process? Not, it seems, as the usual afterthought but as a vital and integral part of a process of building communities. Through funding from ArtPlace America, 76 organisations in 50 states across the US have seen an investment of nearly $27m in arts projects designed to transform their communities. Carol Coletta, Director of ArtPlace, describes a vision of “a future where creative placemaking by artists and their partners will make communities across the US measurably more vibrant and diverse, resulting in increased economic performance; where artists and arts organizations will attain new status and capture new revenue”.

ArtPlace is investing in artists and their ideas, and then attempting to measure the impact of those investments on the economy through its ten ‘vibrancy indicators’. These include looking out for increasing populations, more jobs, greater mobile phone usage and the mix of residential and business units. The list is extensive and controversial, with critics describing the indicators, and the idea of placemaking itself, as fuzzy and ill-defined. Nonetheless, a great deal of money is being invested in projects that appear to be having a transforming effect on their communities. From Theaster Gates in the south side of Chicago to artists working as far afield as Hawaii, Alaska, Texas and Nebraska, ArtPlace America is backing artist-led initiatives to rebuild communities, both economically and socially.

And where does ArtPlace’s investment come from? Well, in part from the Government through the National Endowment for the Arts (NEA). But only in part. The very different funding system here in the US means that the NEA budget for 2012 of $146m represented less than 1% of arts grants made that year.

It has a vision that sees the role of the artist as central not marginal, and creativity at the economic heart of society

So back to the question of giving: ArtPlace America is a collaboration of 13 national and regional private foundations together with eight Government agencies and six of the country’s largest banks. It is a strategic initiative designed to back the vision of artists in times of deep economic malaise. It has a vision that sees the role of the artist as central not marginal, and creativity at the economic heart of society. It is a fascinating experiment aiming to demonstrate what many of us have always known: that the imaginations of artists have the power to transform lives economically, socially and spiritually, in ways that can best be described as ‘fuzzy and ill-defined’. Long live fuzzy, say I.