Norway and England have very different theatre ecologies, but by working in both of them a theatre company can extend its reach and reputation, says Alex Byrne 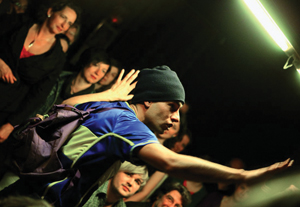 New International Encounter (NIE) is a theatre company that makes small-scale work for touring in the UK and internationally. The organisation began life in 2001 as a group of friends and artists from different countries who wanted to work together. It was not really a planned development; we sought funding and profile wherever we could and played wherever we could find a gig. Over time the founders of the company have set up NIE offices in their home country, so we now have a base in both Cambridge (UK) and Oslo (Norway), and work with theatre artists who live across Europe – from Denmark, Spain, Germany, Czech Republic, France, Norway and the UK.

The two offices operate as separate legal entities but we co-produce all of our work to a greater or lesser extent. Right now we are working on a new show, ‘Tales from a Sea Journey’, based on stories and songs from the sea and our trip on a container ship across the Atlantic last year. Funding for development was split jointly between both offices, but the rehearsal process is funded entirely by Norway. The UK office did not have to fund any of the production costs but we will be able to tour the show here in the future.

In the UK we are regularly funded by Arts Council England (ACE) and in Norway, are project funded by the Arts Council of Norway (ACN) and also receive support for touring from the Norwegian Ministry for Foreign Affairs. We are two different organisations with different structures, imperatives and funders but we share the same strategy for the company.

Norway has a small theatre scene, so a few awards and good shows go a long way – news travels fast and soon everyone (funders included) knows you. Also, politicians have a much closer relationship with the state-funded theatres in the region. There are great links to other Scandinavian nations and the strong social systems mean that festivals and networks are well funded. The UK has a massive theatre scene, both commercial and funded, so it is hard to get noticed – the place is full with so many actors, venues and companies.

In Norway, regular funding for companies is currently on a four-year cycle although there is the opportunity to apply for this annually. There is a much younger tradition of independent theatre groups in Norway, and most of the theatre is state or city funded. At the moment only five ‘free groups’ receive the equivalent of regular funding from the ACN compared to over 100 theatre companies that receive such funding from ACE. Experimental work flourishes through project grants; however, the lack of independent producers means there are fewer commercial paths forward.

The UK offers good networks and is a hub for artists from all over the world. The funding system is difficult and getting more and more squeezed, but it does seem that quality rises as competition challenges complacency. In Norway, the norm for companies is to undertake national tours, so our international work has impressed funders who have not seen many Norwegian companies achieve such international touring. Our success and awards at the Edinburgh Fringe Festival were a huge profile-raiser for us in the UK – but in Norway it was unprecedented. Norway has fewer cultural exports and no national body enabling cultural exports (like the British Council). In some ways this works in our favour as it is easier to get noticed, and the ministry of foreign affairs in Norway has contributed travel funding for some of our international touring work.

The scattered nature of the artists that we work with makes touring and rehearsing expensive because of the overseas travel involved, and we suffer heartache over our carbon footprint.

Wage differentials make it very attractive for some European artists to work with us and very unattractive for others. We also have to find a parity in working conditions between offices, incorporating home industry guidelines. There are huge benefits for us working in this way – split funding for projects makes it better value and each production tours more extensively over a longer period. Two offices means double the activity, so we are able to have a much bigger reach than you might expect for a company of our size.

We have developed a huge network and contacts with festivals and venues in so many places as a consequence of working with international artists. Being an international company means that we are constantly learning from the traditions, habits and processes of each other, and we look forward to what the next 10 years might bring.

NIE has created 10 original performances, won a
multitude of awards and have toured to 28 countries spanning 3 continents

This week Alex has been busy in rehearsals for ‘Tales from a Sea Journey’ at Dramatikkens Hus in Oslo, Norway. He saw lots of new work, including ‘The Experiment’ by Jo Strømgren Kompani as part of the Showbox performing arts festival.