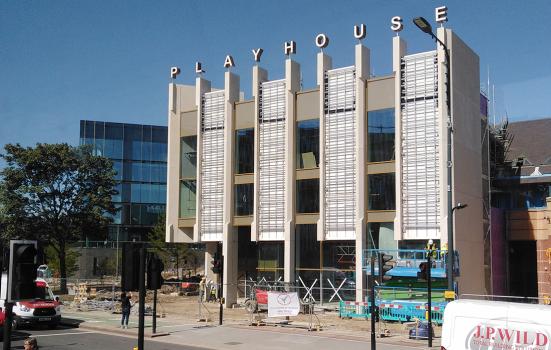 Leeds Playhouse: state of the art venues have adequate ventilation, so will they be allowed to reopen?
Photo:
Terry Madeley (CC BY 2.0)

The SAGE report suggesting that venues with adequate ventilation could be safe to reopen will be news to most – including the people running them. And that begs all sorts of questions, not the least of which is whether the Government is even listening to its scientific advisers, let alone acting upon the advice they provide.

Thus far it has failed to tell the sector that all the PPE and social distancing in the world won’t stop that pesky virus from floating around in the atmosphere, infecting audiences and performers alike, unless proper ventilation is in place.

Why has it not done that? Why did the Prime Minister make an announcement telling theatres to delay re-opening on the same day it published scientific advice which could have supported limited opening of venues with adequate ventilation? Did the advice not fit into the mantra of masking up in shops and keeping socially distanced in all situations?

It seems unlikely that ministers don’t know ventilation is key for indoor situations. It’s possible that this closely guarded ‘secret’ has been shared with the airline industry from day one, since it is permitted to seat customers from all around the world – including Covid hot-spots – cheek by jowl in metal tubes for hours without any ability to open a window.

But SAGE let the cat out of the bag and venue operators should be rightly angry that the Government continues to insist that social distancing is the main route to making their auditoriums safe. Had this critical information been shared sooner, all the contortions they are going through to open with social distancing in place might have been put into improving ventilation systems – and finding a financially viable route to reopening much sooner.

Armed with this knowledge, the Government through its agencies could be directing some of the funding it has offered to the sector towards improving ventilation within venues. This would tick two boxes: providing anxious venues with up-to-date advice while ensuring environmentally sustainable ventilation systems are rolled out.

Most angry of all should be those state-of-the-art super venues that have already installed modern ventilation systems in the past ten years. Many of these will be unable to find a financially viable route to reopening under the current social distancing regime, but could do so with minor and manageable changes like closing off their balconies, bringing in medical-grade PPE for lighting technicians and controlling the crush at the bar during the interval.

What’s most disturbing of all is that, despite overwhelming scientific evidence (including from scientists well beyond the SAGE group) that ventilation is the key to venue safety, the Government has failed to either publicise its knowledge or update its guidance.

Why is the Government making announcements to the sector that run contrary to the advice the scientists are giving them? Are they are worried that someone might suggest that investment in state-of-the art ventilation would preserve jobs and create new ones? The reason for Government’s silence on this is difficult to fathom and DCMS seem unable to offer any clue other than to refer AP back to the Prime Minister’s speech of 31 July – which did not address the conundrum.

Maybe none of this has crossed their minds because the ‘crown jewels’ they are so keen to preserve are likely to already have adequate ventilation systems in place. It’s the regional venues, the decaying heritage buildings, and the pubs, clubs and basements that provide arts experiences that don’t fit funding bodies’ definition of ‘art’ that are most likely to need the money to bring their buildings up to standard.

Here’s betting there won’t be a big appetite in Government circles for those.

If you are not an AP subscriber, we ask that you please think about subscribing now. AP has been badly hit by impact of the pandemic and it will become impossible to sustain this type of investigative journalism without your support.

If you work for an organisation, then by taking out an organisation subscription all your staff will gain full access to all AP’s news and feature content that we have continued to publish throughout the pandemic in  an attempt to support the sector thorough these difficult times.

Thank you for reading.

How do we follow up from this to ensure a case-by-case reopening of theatre and concert venues? Is there a lobby group / committee that is working on this? Add me!