Turning back the clock?

Will Jeremy Corbyn’s promise to “restore” Grant in Aid to the arts councils help reinforce Labour’s reputation as a supporter of the arts? Liz Hill has her doubts. 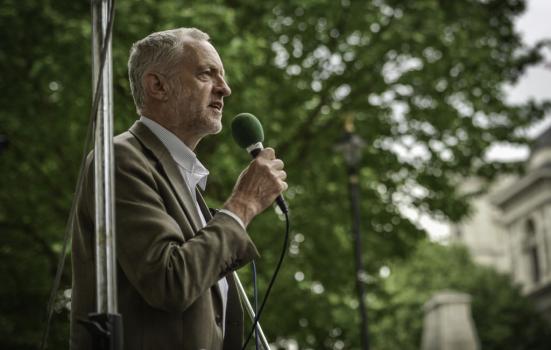 News that Jeremy Corbyn appears to be basing Labour’s future arts policy on a set of fictitious figures is deeply disturbing for reasons too numerous to count.

Maybe he thinks facts don’t matter as the arts sector will vote for anyone who promises to give them more public money.

It is difficult to take a national policy seriously when it ignores the fact that funding for the arts councils in Wales and Scotland is determined by their respective governments and has nothing to do with Westminster.

As for the numbers, the pledge to “restore” Grant in Aid (GiA) to Arts Council England (ACE) is bizarre given that ACE’s GiA funding has actually gone up over the past five years. And the assertion that a £46m boost to GiA, shared between the three arts councils, will somehow “place arts funding back on a secure financial footing” hardly inspires confidence.

All it takes is a quick look at some of the news that AP has published over past 12 months to see that the financial position of the sector as a whole is nothing like Mr Corbyn would have us believe. A promise of £46m is small change in comparison with the huge sums of money that have been generated from the Lottery, and from the hard graft, ingenuity and persistence of arts organisations seeking their own routes to long-term resilience.

Currently, in terms of cash specifically for culture, things are probably as good or better than they ever have been in England. The most recent Spending Review promised Arts Council England a small cash-terms increase up to 2019/20; Lottery ticket sales continue to soar; two-thirds of England’s National Portfolio Organisations are enjoying growing revenues from trading and philanthropy; and ACE is sitting on a big pile of Lottery cash that it has finally decided to release.

What’s more, AP has reported on organisations that are justifiably proud of their achievements in weaning themselves off public funding. Live Theatre in Newcastle has invested in commercial property to generate an ongoing income stream; the Belgrade in Coventry is celebrating record returns from developing a commercial set-building business; and the council-run Theatre Royal and Royal Concert Hall in Nottingham is forecasting a £500k year surplus for the next three years. None of this has been at the expense of the quality of the arts provided.

Given a choice, would the leaders of these organisations turn the clock back and reinstate business models that lean more heavily on the public purse and rely on the changing whims of politicians? It seems unlikely. Chris Stafford at the Curve in Leicester has just rejected a £500k grant offer from ACE, saying that he “is confident Curve can pay its own way when it comes to the catering upgrades” and has turned down the cash “so somebody else can benefit”.

It is clear that the monetary value of government support for the arts is far too simplistic a measure to be used as an indicator of the health of the sector. More to the point – and of much more concern – is the distribution of that money and the number of demands being placed on it.

The regional imbalance in the distribution of arts funding has been well documented over the past few years, as have new claims on ACE’s Grant in Aid. This has had to stretch to make up for the crisis in local authority funding; pay for the national network of music hubs; take over many of the responsibilities of the former Museums, Libraries and Archives Council; and make contributions towards some of the former Chancellor’s pet culture projects.

What’s more, not all the problems facing the arts sector are fixable with a wodge of cash. The de-prioritisation of arts education in England’s schools and consequent fall in number of students taking arts subjects have the potential to undermine the creative and artistic potential of the country more than any marginal tinkering with arts funding could ever do. It’s all very well for a policy to announce a £160m arts Pupil Premium in schools, but that amounts to fiddling while Rome burns. Who will deliver such a programme when the arts have been pushed to the margins of the curriculum and arts teachers have been squeezed out?

Corbyn’s arts policy has missed much of the bigger picture – not to mention the detail – in some key policy areas. Perhaps this can be attributed to Labour’s record on Ministerial appointments in culture. Since 2007 there have been three Labour Culture Secretaries and no less than six Shadow Culture Secretaries – four in the past year alone. How much institutional knowledge can survive such a turnover?

The Tories’ record in this regard isn’t great either; but former Culture Minister Ed Vaizey – who, judging by Twitter comments, has been elevated to the status of ‘national treasure’ by the arts sector since his recent departure from the frontbench – was the knowledgeable power behind the throne for a decade. Both in opposition and in Government he was fully engaged with the arts sector and understood the issues.

Unless Labour gets its act together, it risks alienating its long-held support base in the arts. Making up the numbers isn’t a great way to start.