Liz Hill introduces the grim findings published this week in the ArtsPay 2018 report on pay in the arts and cultural sector. 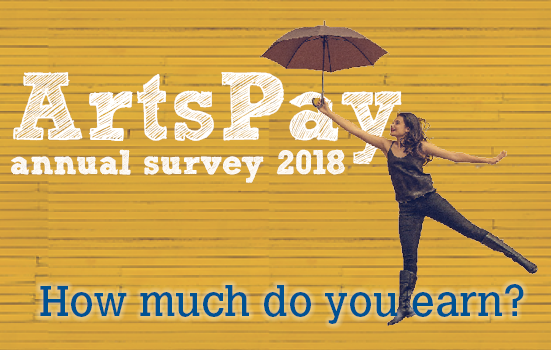 A full report of the findings from the ArtsPay 2018 survey is now online. It paints a detailed picture of earnings in the arts and cultural sector in 2017/18, and provides a benchmark against which future trends can be identified and measured.

Thanks to the thousands of survey respondents who placed their trust in us and told us exactly how much they earned, it has been possible for the first time ever to produce concrete evidence of pay practices in the sector. Analysis of the figures sheds light on many dimensions of earnings – for example, at different career stages, in different types of organisation, by different demographics, and in self-employed, part-time and full-time roles.

Doing ‘more with less’ is a success story that comes with an invisible cost, borne by those who work in the sector.

To add colour to the picture, we have deliberately chosen to include the full text of all the individual comments about earnings or levels of pay in the arts and cultural sector, redacted only to preserve anonymity. These run to 80 pages.

Of more than 650 comments made, around 10 were vaguely positive about pay levels in the sector. Most of the rest make grim reading. The sheer volume of reported misery is overwhelming, and while the numbers in the report give the bald facts about average pay levels, it is these comments that provide the context.

The personal stories tell of unpaid hours; unsustainable workloads; limited prospects for progression; poor pension provision; exploitation – and self-exploitation; undervalued qualifications; volunteers taking formerly paid positions; the need for financial support from family members; second jobs in other sectors; huge differentials between senior and junior staff; freelance rates that have been stagnant for a decade; and experienced and highly qualified workers leaving the sector altogether in order to be able to pay the rent.

Many respondents look enviously at salaries for equivalent work in other sectors, pointing out the irony that because of the work they do, they have neither the time nor the money to enjoy the arts in their leisure time.

Beyond the scope of our research was a response to the request for comparisons with pay in other sectors. These are, however, available online. Arts sector employees would do well to go to websites such as PayScale or Reed to see how their pay measures up with those doing similar work in other sectors. For some useful indicators on graduate starting salaries, Bridgewater resources is helpful.

We hope that the evidence in this report will mean excuses for inappropriate pay practices can start to fall away.

Boards need to read it, to understand the human consequences of funding constraints. Doing ‘more with less’ is a success story that comes with an invisible cost, borne by those who work in the sector.

Executive leaders need to read it. There is evidence that will help them justify the inclusion of appropriate contractual rates and realistic staff salaries in their funding negotiations.

Employees need to read it in order to make a better case for being paid fairly and having a sustainable workload.

And freelance or contractual workers – who appear to be the most exploited group of all – need to read it a) to understand more about the market for their services and b) to take some comfort, if possible, that they are not alone in feeling exploited and undervalued. I hope this report helps redress the power imbalance they face when negotiating their rates.

Most important of all, funders should read it – right through to end – so that they can hear for themselves the reality behind the glossy funding applications that promise the world in the hope of a few crumbs from their table.

It’s clear from this report that funders who simply point to policies describing good pay practices for the sector and expect cash-strapped cultural organisations to readily adopt union-advised rates are deluding themselves. Funders are the pipers who call the tune in the cultural sector and theirs is the responsibility to take the lead. They now have concrete evidence of what’s actually going on, so there’s no place to hide for those that fail to address the issues raised.

But if they don't take action, then it is equally clear what the consequences will be: a less diverse sector that fails to recruit the best talent and loses its most effective and experienced workers to industries that recognise their skills and reward them with, as a minimum, a sustainable lifestyle.

Working for ‘the love of the arts’ has ceased to be a viable option for most, who are starting to vote with their feet. This report needs to act as a wake-up call to everyone with any power to start turning the tide.

Free to speak? Not if you work in the arts
'My mother-in-law is a witch': do's and don'ts for late tax returns
A sticking plaster policy
A wake-up call
Why the EBacc will divide society
Introducing AP Europe
Why Quality Metrics is a really bad idea
Turning back the clock?
Referendum as research
Unusual suspects