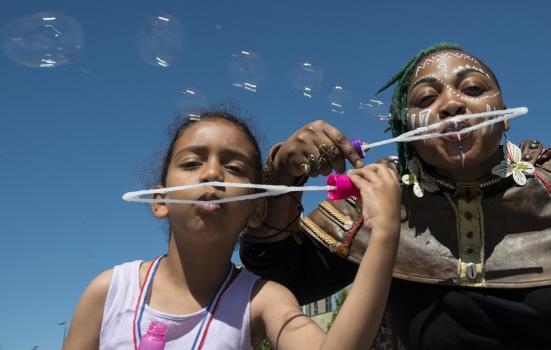 Nine long months with limited access to culture – whether it be theatre, live music or trips to the cinema – has taken a huge toll on us all and proven just how important cultural activity is not only to the economy, but to us as human beings.

With 29% of our population under 20 and nearly a quarter under 16, Bradford is the youngest city in Europe, so it’s no wonder culture plays a vital social and economic role. Not only does culture connect us with others in our neighbourhood, but the diversity of the district opens our eyes and minds to others' experiences and perspectives

From the city centre to Shipley, Manningham to Keighley, and Buttershaw to Ilkley, the whole Bradford district would be completely transformed by securing the UK City of Culture title for 2025. This designation is key to unlocking the potential of all our people, leading to positive outcomes for everyone that lives, works and studies here. It will support our shared commitment to tackling inequalities, help change perceptions of the city in the UK and around the world, and contribute to our economic and social ambitions for the coming decade.

Bradford boasts rich cultural heritage. Recently celebrating the tenth anniversary of its status as the first UNESCO City of Film, and it is where artists like David Hockney, the Brontës, JB Priestley, Andrea Dunbar, and Daniel Lee, developed their practice. Throughout 2020 Bradford has been working to strengthen the district’s cultural capacity to establish a new voice for independent cultural groups and artists and, critically, to widen our definition of culture to reflect a more holistic understanding of what’s really going on in people’s lives. Bradford’s £3.5m Creative People and Places programme THE LEAP is working to engage more than 100,000 local people in some of the district’s most disadvantaged areas by fuelling their own community-led creative and cultural aspirations. The district has also co-devised an ambitious new ten-year cultural plan and culture has been designated a key driver in the district’s plan for economic recovery from the pandemic.

We’re lucky to have a wealth of home-grown, grassroots arts organisations that are retaining and growing our creative talent. Companies like England's largest learning disability theatre company, Mind the Gap, female-led political theatre collective Common Wealth, and intercultural arts hub Kala Sangam are indicative of an emerging generation of arts organisations and leaders successfully engaging new audiences. Understandably, 2020 has been difficult for these organisations, which is why Bradford Council established a Cultural Recovery Group to pool ideas and resources from the culture, leisure, hospitality and tourism sectors.We want culture to be a significant part of the district’s Covid recovery and, as part of this, we’ve awarded more than 100 grants to local creatives and community groups involved in film. We have also worked with Black History Month, Intercultured Festival, and South Asian Heritage Month, and early in the new year we’ll be launching a new creative initiative in local schools and colleges. Work is ongoing to re-open the 4,000 seat Odeon as a much-needed music venue Bradford Live.

The cultural infrastructure is already here, which means we must turn our attention to what makes this city such a distinctive and creative place to be – its people. Putting local people at the heart of the bid will make 2025 and beyond a celebration of the culture of Bradford, by the people of Bradford. We want this to be something that local people will be proud of, that they will tell their children and grandchildren about. It’s a big job. Bradford is twice the size of Hull, which hosted UK city of culture in 2017.

Our answer is the ‘Bradvocates’ – a team of people passionate about the city they call home. Initially, we thought this team of engagement and inclusion champions would number around 10-15 people, but 24 people came forward, so we made room for everyone. Engaging young people in the bid process is hugely important: our youngest member is 15-year-old student Zahabia Naveed. She is joined by activists, council leaders and policymakers. Together, we will take on the crucial task of rallying the district and its ideas behind the bid.

We’re proudly one of the most diverse cities in the country, and it’s vital this is reflected in the bid. Throughout the autumn, the team has led a series of virtual consultations with communities to develop themes and ideas, reaching our Black, Eastern European, South Asian, LGBTQ+ and refugee communities to name just a few. In this way, we can create a truly authentic bid. We also have a growing and thriving older population and while this year has presented them with a lot of challenges, we will proactively seek out their voices and include their ideas.

Bradford has really come into its own in recent years and the district is brimming with potential. With the authentic voices of our local communities, the people who know the city the best, at the heart of this bid, we’re confident our bid will be unbeatable and one that all the people of Bradford can be proud of.

Richard Dunbar is Leader of the Engagement and Inclusion Advisory Group for Bradford’s UK City of Culture bid.