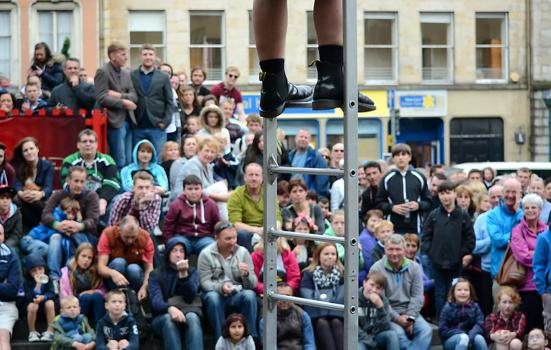 Since the announcement that Edinburgh’s summer festivals will not go ahead as planned, artists and venues have worried about the economic impact of this decision, particularly for cultural organisations and local businesses. But they should also be concerned about losing the social environment – one that fosters meaningful connections through shared cultural experiences.

Some festivals have decided to go online, and there is speculation around whether events such as the Fringe may still be able to happen in some form. But festivals are more than just a momentary interaction with an art object and we must ask: if a festival is largely about the social context, is it possible to transfer festival experiences into an online space without losing its essence?

There are three fundamental elements that characterise a festival.

It is inherently social.

Art is inextricably linked to the environment, culture and social interactions, and how people interpret arts experiences depends upon the meanings associated with these factors. Arts festivals bring this quality of the arts to the fore because social events are at their core, both for participants and audiences.

Reflecting on the Fringe, the experiential package might include: rehearsing for months, travelling to Edinburgh with friends or colleagues, living together for weeks, flyering several times a day in public spaces, and socialising together – as well as watching up to ten productions daily. There is a blurring of professional and personal, where social spaces are work spaces and where artists are audiences, and vice-versa. It is physically and mentally intense, where every minute of experience is a Fringe-experience.

As the Edinburgh Festival Fringe Society claims in its publicity, the Fringe is “the premier meeting place for creative people” and it is “at the centre of a global movement”. A movement entails shared values, common goals, and group action. These become palpable when attendees gather as part of what many describe as the Fringe ‘tribe’ or Fringe ‘community’, physically coming together with thousands of other art lovers, and feeling the excitement of participating in one of the cultural high-points of the year. Many people talk about the emotional extremes experienced at the Fringe – from ecstasy to exhaustion – and how emotional energy flows throughout the crowds attending. We ‘pick up’ on the emotions of the Fringe from those around us and these emotions bind us together, acting as a kind of ‘social glue’. As Stephen Fry has said, part of what makes the Fringe movement so “extraordinary” is “the vibrations it sets off”, and these are emotional vibrations between people in a physical location: Edinburgh.

As the sociologist Jonathan Wynn observed, meaning is socially constructed from the social and emotional experiences that take place within a festival city, and the organisational structure of a festival influences the kind of meanings that are constructed. Drawing on Wynn’s study, the Fringe can be viewed as a festival that “sprinkles events across a wide area”, assembling “the widest array of actors, organisations and experiences”, but allowing room for “shadow” events. Festival and city are intertwined, and the meanings attached to festival experiences are not only created in the theatre. They are also co-constructed with others in restaurants, pop-up bars, parks, shops, parties, or in other public spaces, across both official and unofficial festival situations. Through these shared experiences, the words ‘The Fringe’ become imbued with meaning, as does Edinburgh.

It recurs in a similar way.

Not all festivals are annual, but they tend to happen at regular intervals with common features – a connotation of traditional (religious) festivals, where words such as ‘authentic’, ‘ritual’, or ‘celebration’ may spring to mind. But the importance of an annual celebration should not be reserved for traditional festivals only. Edinburgh’s festivals share ritual ingredients as well. Consider the Edinburgh International Festival’s closing ceremony where people gather in Princes Street gardens to watch the fireworks display light up the castle, enjoying the “dazzling finale” with friends and family. Or, consider the Fringe street performances which fill The Royal Mile and The Mound, where artists interact with passers-by, with audiences cheering and clapping. These experiences may not be identical each time, but we can imagine the kinds of experiences that we expect to have in Edinburgh during August. And it is even this expectation and looking forward to the festivals that helps to foster the shared meanings that we associate with them.

Can we move a festival online?

Some festivals have already decided to host their festivals online, such as the Edinburgh Science Festival and the Edinburgh International Harp Festival. While there are some documented psychological benefits of online cultural engagement, these experiences are altogether different from participating in person, and we should be careful not to equate them.

Online spaces cannot foster the emotional vibrations and social connections between people in the same way that offline festival experiences can. Some elements remain available to us – the branding that we associate with the meaning of the festival, and an online discussion in response to an online performance that provides an opportunity to share views, for example – but we’ve lost the intensity of being physically present together in the bustling city.

The financial impact of closing Edinburgh’s festivals may be considerable, but this isn’t the only impact we need to be concerned about. The social impact of the cancellation will be profound as well, and while we are yet to know the repercussions of this, we should acknowledge that we are losing more than money. We are, temporarily, losing a space that fosters social solidarity through shared cultural experiences.

Katey Warran is completing a PhD in Sociology (AHRC Creative Economy Studentship) at the University of Edinburgh, based in the School of Social and Political Science and supervised by Dr Lisa McCormick and Prof David Stevenson. She is also Coordinator for the Arts Health Early Career Research Network.

For many of us that make work outside of traditional venues, be that on the streets or in other spaces, there is a conscious decision to connect with more diverse audiences...and one of the magic things about a festival is that it enables all of us - audiences and performers alike - to be different, to be not ourselves, for a short period of time before we return to 'the real world'. The transformation that we see in cities like Hull during Freedom Festival, Leicester during Diwali, or Manchester on Manchester Day, is both visible - in the streets and the squares; and invisible - inside us, the audience, who are given permission to imagine our worlds differently. The audience, who are also the participants, at Lost Village or Boomtown or Glastonbury occupy a place of imagined and utopian unreality for a few days...and we all hope that those feelings - of how the world could be - stay with us for longer. When a town's streets are closed to traffic for a parade, or colourful flags go up in every square and people gather in good humoured, multi-generational anticipation of live music, or spectacle, or a street performance, people often say "I wish it could be more like this all the time"... So yes, we lose those spaces of social solidarity, but we also lose space for shared and collective imagining of a better way to live together in the future. I hope that there will be enough artists/companies left, after this current crisis, to forge new worlds through shared creative endeavour because it's from the independent, small scale landscape, like the Fringe, that new thinking tends to emerge.