Are fundraisers too scared to take risks? Michelle Wright examines the issue and asks three arts fundraisers what they’ve learnt from their own failures. 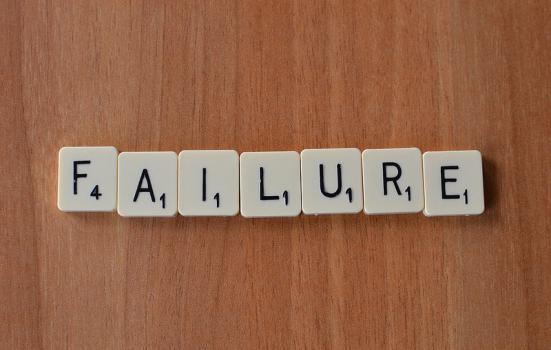 It’s tough for arts organisations at the moment. As I work with CEOs and artistic directors it’s not lost on me that most have the threat of funding cuts or failure in fundraising hanging over their heads like a sword of Damocles. Psychologically, that’s tough. How much time can we invest in fundraising and what can be exploratory? How do we walk the tightrope of risk, knowing that every decision is likely to be scrutinised by the public and our key funders? It is high stress stuff.

This environment leads to two symbiotic states of mind for our fundraisers and funders, neither of which in my view helps us to promote new ideas or a more entrepreneurial culture: fundraisers are often terrified to make mistakes or take risks that might not bring in the funds needed; and more worryingly in my view, funders become more risk-averse.

“Instead of seeing every door that is slammed in my face as a failure, I just see it as being one door closer to finding someone who will commit”

Many of the fundraisers I know bemoan the fact that while many of our funders are supportive conceptually of the news of a new business model or innovation, their behaviour and subsequent grant-making often suggests that they should be the last place to go with a bold or risky idea. To some extent this is understandable: why would a funder make a high-risk grant for something that might flop, especially when public funds are at stake? Similarly, if we were truly honest, how many organisations would benefit from a radical overhaul of their business model, but are too disempowered and afraid to act in case the funders wouldn’t support such a vision? What then emerges is a paralysis, with board, executive and key funders all ending up protecting the status quo.

And for the fundraisers, similar fears can also kick in. A sense of being judged or worried about failing can be prevalent in the mind of any person charged with generating income for an organisation, especially when they are starting out. After all, we are conditioned to fear failure from an early age. The psychologist Carol Dweck relates this to a fixed rather than a growth mindset, as conditioning that starts in our childhood and is then embedded via the negative cultures in our school system.

When you’ve been conditioned to fear failure, is it possible to recondition yourself? For fundraisers a growth as opposed to a fixed mindset is essential. After all, how many organisations do we know that are relentlessly pursuing a fundraising strategy that is simply not working? It’s vital to be able to move to a plan B without being stuck on an original idea that isn’t reaping rewards.

With all this in mind, I asked some of our current arts fundraising fellows, who are right at the start of their careers, what their experience of failure had been to date and what they had learned from the experience.

Jonathan Mace, fellow at the Royal Shakespeare Company, reflects that he has quickly had to learn how to turn perceived negatives into positives to keep motivated. “Instead of seeing every door that is slammed in my face as a failure,” he told me. “I just see it as being one door closer to finding someone who will commit, while helping to refine our message.”

Dav Williams, fellow at the Balbir Singh Dance Company, has also focused on finding the learning in the process even when funds might not be forthcoming. He explained: “We prepared an application which ended up not being submitted, but it still gave us the chance to consider our approach to the creative case for diversity holistically, irrespective of the funder’s decision.”

Sometimes the effort expended in fundraising has an impact above and beyond the raising of hard cash. Reflecting on unsuccessful applications, Jodie Marsden, fellow at Artswork, said: “I submitted my first funding application in October for £7,000 and it was rejected. I learned that receiving a no isn’t so simple. We were rejected due to lack of funds. That’s not a ‘No, your project is a bad idea’ or ‘No, your organisation doesn’t fit’. I may not have secured the money but I did secure the permission to reapply, and next time round the funder will know the name Artswork.”

I think we can all learn the lesson that rather than fearing failure it can be a type of freedom – and most definitely isn’t fatal. The strongest determinant for success is not about never failing, but being resilient and learning quickly when things go wrong. Let’s also not forget that we need to be honest with funders when things don’t work out. Relationships matter, and if we build from a point of honesty, it might give funders more confidence to embrace risk too.

Michelle Wright is the founder and CEO of fundraising and development social enterprise Cause4 and is Programme Director of the Arts Fundraising and Philanthropy Programme.
artsfundraising.org.uk

A set of Essential Fundraising Skills training courses will take place across England from January to April as part of the programme.

Communicating with donors at a time of crisis
Power to the people: how arts charities will have to change over the next 10 years
Wooing the young billionaires
The crisis in arts fundraising talent
Is it time to reimagine the trustee board bank?
We need to work harder on donor diversity
Are you sitting too comfortably?
Big vision
The elephant in the room – should trustees be obliged to give?
How to… develop a fundraising strategy