Crowd-funding was a rough but eventually successful ride for Gill Kirk. She reveals the highs and lows of her month-long campaign. 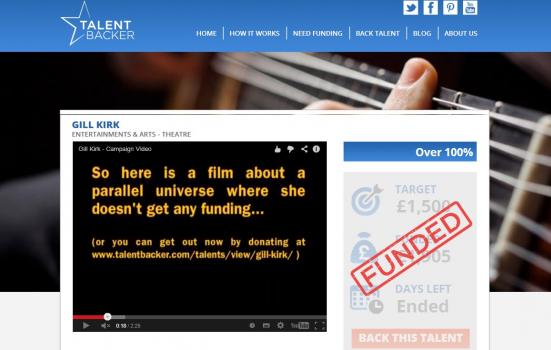 I’ll be frank with you, Grants for the Arts (G4A) forms drive me nuts. I run a business, have sat on a few charity boards, I even report on other people’s budgets as part of my day job. But can I get a G4A form right first time?

The goal was one day’s script development for a quantum mechanics love story. It’s not commissioned, was written in an unusual way and I don’t live with anyone over the age of three. I hired a great dramaturg (the excellent David Lane) and after a couple of redrafts, we agreed that we needed to stand this thing up before it went out.

This was my first G4A attempt and I entrepreneurially said that I would crowd-fund part of the budget. After the second rejection, dates loomed and crowd-funding had to become reality. Wanting a UK site that could attract arts backers, I signed up with Talent Backer. I then realised that successful campaigns need a decent film. And a strategy.

Perhaps most significantly, a lot of the funding came from my Facebook contacts

£1,500 is no small amount to raise in 28 days and if you don’t hit the target, you don't get a penny. Thankfully, Talent Backer are anti-panic and coach you every day. It is in their interest that you do well too. It is not just about their percentage charge (standard practice), but successful campaigns will attract more users and funders to the site.

Once I got going, this was the be-all and end-all. First, I made a short, wallet-loosening film. Pulling people into the world of the script, it conjured up a parallel world without funding, a mad toy elephant leading a drunken teddies' script-reading, and my resulting insanity. The message was simple emotional blackmail, but, especially at the beginning, it did draw people on to the site.

Talent Backer’s daily coaching was tough but effective: “Mail everyone in your address book today.” I did. Fear of falling flat on my face − and the risk to the script’s reputation − was the biggest driver. This is not for the lazy or shy. It is absolutely not comfort-zone stuff. I asked almost everyone I knew for money. I sent out a press release about myself to the local paper with a picture to help sell the story. I tweeted and Facebooked incessantly. Squirming, I asked mates who are a little bit famous to retweet me on twitter.

What happened? We hit the target with six days left and ended up 25% over target. But a week earlier, at the half-way mark, it was not looking rosy and I had to go hell for leather. Perhaps most significantly, a lot of the funding came from my Facebook contacts: friends spanning 20 years and several incarnations (schools, uni, politics, committees, old boyfriends’ mates, various jobs as well as theatre and screenwriting). Twitter and the media brought great publicity for the project (which I leveraged on Facebook and will help when we take the script to theatres), but they did not bring me the money.

Every campaign is different (context, reputation, cause, etc), but here are some tips for most situations: