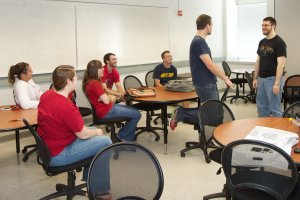 In 2011, the psychologist and improviser Alex Fradera was exploring how the collaborative theatre and play techniques he used onstage could speak to the demands he had experienced as a practising scientist. Meanwhile Professor Edmund Harriss was pondering how to explore communication and community with his 2012 Honours Maths class at the University of Arkansas. Brought together by Dougald Hine's University Project, a platform for experimenting with working collaboratively and using networked technologies to reimagine the univeristy, we discovered our shared interest and set out on an experiment between disciplines and fields.

The open exchange of ideas invigorates any field and heightens its influence on the world. But maths is solitary, jargon-heavy, and involves challenging concepts; making communication outside of narrow subdomains tricky. Furthermore, there is little incentive to widen your audience: career-wise it’s better to appeal upwards than outwards. Besides, do you really want everyone to understand the work you’re doing – what if they think it’s obvious? These concerns can be real anxieties for mathematicians and scientists early in their career.

This project aims to explore how to provide the next generation of mathematicians with a more flexible, resilient and expansive mindset. We want to nurture a more functional maths community through greater cohesion, communication and openness, and for individuals to flourish through improving skills and developing a healthy attitude towards success and collaboration.

Formally, the course requires students to develop an explanation of mathematical concepts using a wide range of skills, including writing, images (preferably photographs of physical models) and presentations using words and props. This basic structure allowed us to offer a number of activities and processes to explore our key themes.

To practice what we preach, we built student communication and collaboration right into the course. The class description was extensive and made it clear that “we're looking to do a little more than usual”, focusing on sharing and communication as much as understanding. The course took a prototyping approach, with a byword of “test, learn and adapt”, welcoming student input, both through informal means and scheduled check-ins, and using this to evolve course content and priorities.

We also suggested to the students that they would get more from the course if they engaged with it with certain qualities in mind:
• Forgiving – tolerance for mistakes
• Playful – up for experimentation and taking risks
• Honest – having standards and sharing when something doesn't work
• Intimate – know each other better, to connect and share

Students were initially paired up with a buddy: more than study partners, buddies observed each other during presentations, provided feedback and even presented each others material. New pairings were formed after the first formal check-in, making use of what students had realised they needed and could offer to each other.

Additionally, we introduced a range of focused but playful course activities. These were adapted from exercises used in improvisational theatre, notably games developed by Keith Johnstone and his Loose Moose Theatre in Canada (Alex has studied at the Moose and with Keith). For example, a student would present on a simple topic while their audience played the ‘Beep beep game’ – responding whenever they felt personally neglected by sending vocal signals to the presenter until they had been included again. Another game asked the student to present on their own work while incorporating arbitrary words flung at them by the audience. A separate session organised a ‘chat show’ where students, in-character, tested out beliefs about communication. The class ran a ‘maths marketplace’ to pitch projects for others to run, discovering how to spark audience interest. In coming weeks students will experiment with presentation style by explicitly borrowing from their buddy, examining how taking on a new cadence or physicality may assist them. They will also do so with imaginary characters or archetypes: how does rehearsing your talk as a priestess generate new possibilities?

Following a maths and science education route carries the risk of winnowing away habits of thought that are variously described as right brain, rich, or mythocentric thinking. (The arts are not immune, it’s just that the imbalance tends to flow the other way!) So these unfamiliar activities are an opportunity to revisit different ways of being, with self, other and the world. The students learn skills – how to focus on audience needs, flexibility in the face of unexpected twists and turns – but also stretch their comfort zones and challenge the idea that success depends on everything going exactly to plan.

Our biggest challenges? Ensuring that the improvisational content genuinely does complement the maths context of the course was crucial, and led to many long skype calls in the months before launch. Also, cross-ocean collaboration leaves Edmund the only facilitator in the room, with Alex offering interstitial support (game ideas and brainstorming) and dropping in to sessions via skype. So it can be tricky to sense the atmosphere in the room and know when a stretching exercise has spilled over into simply un-fun. Making a safe space for feedback has been essential. We will doubtless better understand where things went wrong through appraisals at the course end!

What next? When we have tested, learned and adapted, and found what we believe to be a successful and worthwhile model, we will consider seeking funding to expand the project.