Open Studios ? On the arts trail

The first Northern Devon Arts Trail, linking a number of isolated rural communities in Torridge and North Devon districts (an area the size of London), took place over nine days last June as part of the North Devon Festival, writes Stella Levy.
The idea for the trail started in October 2000 during a meeting with North Devon?s Cultural Development Officer, Alan Dodd. Together with fellow co-ordinator Simon Heath, we then had just under a month to choose the artists, secure funding and put the publicity together. By the end of the month we had £7,000, twelve open studios, two exhibitions, two installations and nine galleries taking part in the nine-day event. 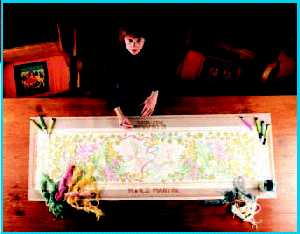 And then foot and mouth broke out. We were encouraging people to travel across the county from Lynton to Holsworthy. Inevitably, there were a lot of discussions about cancelling the whole event and we monitored individual artists on a daily basis about the propriety of encouraging visitors to their area. Visitor numbers were down on our anticipated figures. Prior to the event we had received calls from people wanting to visit from as far afield as Nottinghamshire and London, yet virtually all the people who visited the trail were local. Some artists fared better than others ? those with studios near other participating studios did best ? and those artists who did something a little extra to encourage visitors did best of all. One artist held a party for all his neighbours on the first day of the trail and sold a couple of pieces that night.

At our post-trail artists? meeting there was strong support for us to build on our success, as it was felt that the impact of trails such as this are longer lasting than the nine days of increased visitor numbers. The plan was to develop the trail into something larger and more permanent.

In September this year the STRAW biannual ?Nine Days of Art? artist-led open studios project is set to take place across the whole county, and it was felt that to run the trail in the same format could be a case of over-egging the custard. But we still thought it important to build on the success of the 2001 trail, develop its role as part of the North Devon Festival, promote local artists and do something a little bit different.

From these aims came the 2002 Open Spaces Arts Trail. With the help of an Awards For All grant and in partnership with the newly structured Beaford Arts mobile arts team, the trail will focus on four communities within the region. It will develop, through consultation with the communities, four temporary public artworks linked by a common theme. The project starts now with a writer visiting the four communities to look at the ways in which they were affected by the foot and mouth crisis and dealt with it. The writer will then produce a piece that will be the basis for the artworks and will link the four communities together through a theme. The work will have no fixed starting or finishing point, reflecting the cyclical nature of farming (working with the seasons), so that visitors can start at any community and visit the others to complete the story. Four artists will be commissioned (one for each community) to produce a piece based on a part of the written work, to be installed in open spaces such as fields, parks, and so on. These artworks will be promoted as a trail to encourage visitors to the communities.

A lot to take on in six months probably, but we are already looking to 2003 for a return visit to open studios ? only this time it will be bigger, better and we hope we won?t have to compete with foot and mouth!