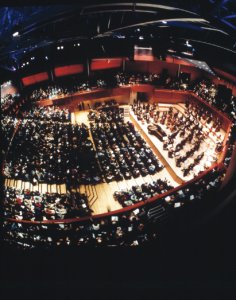 Can, and should, contemporary arts facilities be all things to all people? Julian Middleton explores the issues.

These days, the need for flexibility within the auditorium extends far beyond performance configurations, to embrace patterns of alternative use for education and outreach activities, alongside alternative strategies for less traditional inclusion programmes and revenue generation. In parallel, expectations for the adaptability of other spaces within todays theatres, particularly public areas, have continued to evolve. With arts organisations demanding ever more from new and existing facilities, what are the key considerations when planning a flexible theatre?

Adaptability in the auditorium

The need for flexibility within the performance space is a long established requirement. Such adaptability traditionally means variability in staging configuration; an ability to alter performer/audience relationships, in both theatre style and performance type. Historically the most radical transformations and the higher degree of flexibility are normally associated with the studio performance space.

During the past 20 years the black box studio has gradually given ground to experimental spaces that balance aesthetic neutrality with a clear architectural presence. Driven by the artistic vision, such spaces, exemplified by the Donmar Warehouse, allow directors and designers the freedom to create their own worlds whilst engaging with a defined architectural character. Sitting philosophically somewhere between the traditional blacked-out studio and the found space, these auditoria have a clear functional adaptability counter-pointed by a sense of aesthetic variability.

Moving up the scale, and beyond 300 seats, such transformations become technically more complex. The stakes are increased as we move into the realm of the multi-format space. Venues like the Anvil in Basingstoke or the Milton Keynes Theatre are performance buildings that need to deliver radical transformations to achieve large-scale format changes. These are auditoria that are equally at home hosting symphonic music and large-scale lyric theatre or dance performances.

This form of multi-format venue is at the heart of the new cultural centre planned by the Cyprus Cultural Foundation, illustrating that cultural and economic preoccupations cross many borders. In Cyprus the main auditorium will support a wide range of performance activities. The brief was an appropriately pragmatic response to the countrys emerging audience for the performing arts. However, in a well-articulated brief the client also enshrined their aspiration for a world-class concert venue. A convivial climate also meant they were keen to explore external performance opportunities in, of course, an adaptable external performance arena. 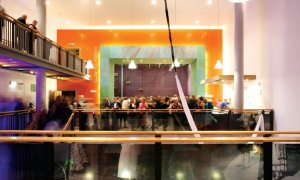 When developing a brief, be it for an adaptable studio, or a more specific multi-format venue, the key to getting it right is to establish a clear performance hierarchy. The real imperative however, is to assess this in both qualitative and quantitative terms. This identifies the critical questions: what does the space need to do most often? And, what does it need to do the best? The question itself indicates an inherent degree of compromise if the answer to both is not one and the same.

A direct illustration of such a hierarchy in a brief, and subsequent building, is the Anvil in Basingstoke. This hall had to fulfil a range of uses, but the forward-looking council set as its overarching agenda the achievement of a high quality classical hall. Whilst acknowledging that classical music would never be the most regular event, its pre-eminence in the hierarchy had a marked impact on the design, the public perception of the facility and the prestige of the town. Balancing the qualitative agenda, the quantitative list identified popular music as most regular activity, with lyric theatre lower down the agenda. The resultant facility is first and foremost a concert venue that accommodates other uses by degree, with an accepted qualitative shift as one moves down the performance hierarchy.

Whether working at the small or larger scale, core design issues remain common.

Physical configuration: Successful spaces ensure that adaptable auditoria appear architecturally correct in each configuration. Seating blocks, sightlines, side seating etc. should all contribute to the overall audience experience, reinforcing the sense that this is how the space should be.

Acoustic imperatives: Beyond layout, the acoustic response of a room is critical. At the smaller scale, acoustic variance between extremes of music and drama can be relatively easily tackled by building physical volume for music and deploying absorption for drama. At a bigger scale, and larger budget, solutions need to be more dramatic with variable volume ceilings to help radically alter the acoustic performance of a space. On more limited budgets, or differing performance hierarchies, the technology of assisted resonance systems can be utilised to cater for occasional classical music in a smaller theatrical volume.

Ease of changeover: Multiple format venues require rapid turnarounds. They are venues that need to host a standing audience one night and a seated one the next. Ease of transformation and reliability is key. Minimising the number of moving components and number of operatives required are critical considerations. Flexibility on the floor always needs to be matched by adaptability in the ceiling zone. 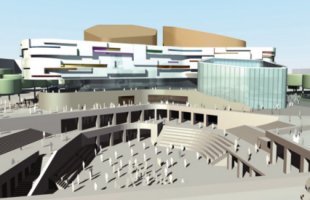 Best value technology: The correct balance has to be achieved between mechanical operation, time and capital investment. Less regularly used permutations can afford to be less easily achieved, whilst the main regular changeovers should be achieved with the maximum of ease.

Ambience: A critical, but often overlooked criterion in the larger spaces is the change in ambience required in the more extremes format changes. The environment in which classical music is performed (well illuminated with the architecture visible) differs sharply to dimly lit and more focused spaces for drama. The technical dexterity of adjustable components, as in the smaller studio, has therefore to be matched by a real ability to modify lighting, colouration and ambience of the space.

Beyond the performance space, contemporary arts buildings need to be adaptable throughout their accommodation. Whilst the 24-hour foyer may be optimistic, the all-day foyer is a desirable and essential reality for many. With public spaces in particular, flexibility in arrangement and use is required at different times of the day and during different periods of the year. Location and type of organisation must always play a defining role. Adaptable front-of-house provision will mean fundamentally different things for, say, a cutting-edge producing theatre such as Northern Stage, and for a major touring theatre like the Belfast Grand Opera House. However, fundamental themes are shared. In each of these particular venues, opened last year, are public areas that were developed, like their auditoria, with a hierarchy of use. This has proved fundamental in delivering public spaces that can multi-task to meet ever- changing requirements. They may not indeed be all things to all people, but with interconnecting spaces dissolving the boundary between performance and public space they go a long way in offering a vision of adaptable performance venues for the future ones that not only allow experimentation and new direction in the work on stage, but also allow the role of the organisation to develop as its utilises all its available resources and facilities to deliver and support a wider vision. 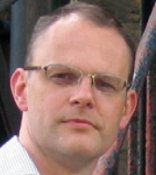 Julian Middleton is a director for Arts Team, which specialises in innovative architecture for arts and cultural projects.
w: http://www.artsteam.com 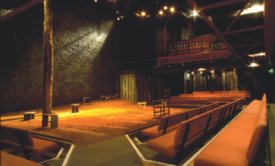