With athletes about to arrive in Birmingham for the 2022 Commonwealth Games, a mass gift-making initiative has been underway to welcome them. Deirdre Figueiredo led the project. 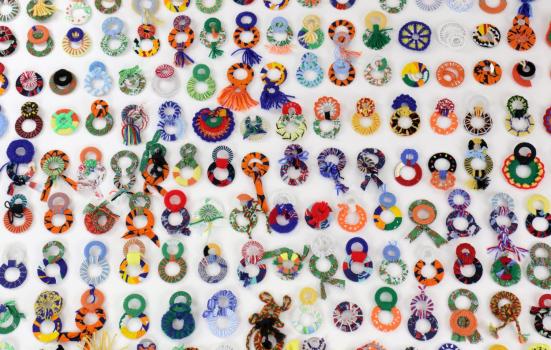 The Birmingham 2022 Festival aims to unite people from across the Commonwealth through a celebration of creativity, shining a spotlight on culture in the West Midlands. As part of the festival, Craftspace was commissined to make gifts for the international athletes.

Craftspace creates opportunities to see, make and be curious about contemporary craft, championing its power to change lives and communities. Craft values and thinking contribute to a progressive and cohesive society while building relationships between artists, people and organisations that encourage the sharing of ideas, skills and knowledge.

With over 35 years’ experience, Craftspace continues to learn, push boundaries and challenge ideas. We initiate artistic programmes which stimulate creative excellence, critical thinking and understanding of contemporary crafts in the widest social and cultural contexts.

The project - 4600 Gifts - was conceived by Craftspace as a project of scale and ambition, fitting for a historic moment for our city of Birmingham. It is an exemplar of the power of craft to turn people outwards in a shared, symbolic act.

The idea was simple, inviting the people of Birmingham to make gifts of welcome for the athletes of the Birmingham 2022 Commonwealth Games. A gift is a thing given willingly to someone without payment. Gift giving allows people to connect. Making connections with people gives us a sense of purpose and feeling of satisfaction and wellbeing.

Craftspace frames its work around principles of ‘the commons’, craft as a form of commoning – a universally shared resource with skills, rituals and knowledge passed down through the ages. Activating the power of social cooperation through grassroots making.

Many of our projects are devised as a collective experience of making together. Through 4600 Gifts we wanted to challenge the tendency to measure prosperity and success in monetary terms rather than by the assets which relate to people – human and social capital, skills and resilience.

Birmingham used to be known as the ‘city of a thousand trades’ and the ‘workshop of the world’, with its products shipped all over the world. We wanted to create a project that referenced the industrial heritage of Birmingham while also reflecting the diasporic cultures and identities of the diverse communities who have migrated to the city.

Our intention was to re-imagine the idea of ‘workshop’ and ‘factory’ through citizen engagement in making, using locally sourced materials and skills. We challenged ourselves to produce gifts that met the principles of sustainability and circular economy.

As project lead, my lived experience and heritage is shaped by growing up in Commonwealth countries, colonisation and migration to the UK. I felt it important to collaborate with artists who shared this heritage.

The artists who formed the development team are all from the Midlands region. A mix of product designers and textile artists - Wayne Pottinger, Natalie Cole and Laura Nyahuye are established while Kalandra McFarquhar and Mahawa Keita are early career.

A celebration of our common wealth

Development began with frank and challenging discussions about the Commonwealth and what it meant to us. Laura spoke eloquently about how she felt that her Zimbabwean community had been robbed of their gifts by colonisers.

We moved to a position that everyone has gifts to give to their community. The act of making a gift for an athlete of a Commonwealth country would be like an act of reparation, making them together, sitting next to a stranger, friend, neighbour, family in a shared celebration of our ‘common’ ‘wealth’ of cultures.

We co-devised ideas through workshops and experimentation with materials and techniques, needing to produce a template which people could customise and embellish by hand with minimal tools.

The activity had to be achievable in around one hour and be suitable for those with little or no experience as well as offering potential for enthusiastic crafters to show off their skills. This resulted in several prototypes which were tested by a focus group. Two athletes also gave valuable insights during the process.

The base of the gift is two metal washers made by Stephens Gaskets, a local family-run manufacturer. Textile techniques of wrapping, knotting and sewing are the main focus of embellishment. The threads, yarns and fabrics are from the Birmingham Scrapstore, Rag Market and local independent shops, including those that sell African and Asian fabrics.

The selective colour palette represents the most common colours found in the flags of Commonwealth member countries. The joining of the two washers symbolises friendship, connection and unity. Like charms or talismans, they carry an investment of spirit, love and energy, a meaningful exchange from one hand to another. Each gift has a handwritten message of welcome.

The kit was designed so that all materials and tools were provided, and gift makers could take a seat at tables in an accessible, equitable and democratic way. We recruited additional artists led by Mahawa Keita and Tia Parmar and volunteers to run more than 100 workshop sessions across the city in collaboration with some 34 hosts.

We also partnered with a city centre academy involving 700 pupils making gifts. Two city centre ‘mass makes’ were organised in Selfridges and Birmingham Cathedral Square. The project was showcased at the Library of Birmingham before the gifts were packaged and distributed to the athletes’ villages for inclusion in the welcome packs.

Unlike a mechanised factory, our production line is resourceful, inclusive and empowering. Corporate supply chains have been disrupted in favour of local domestic ones. Hands were busy, hearts were open, and many conversations were had.

Put together, the gifts form a portrait of our diverse city of many talents at this historic moment. As an antidote to commercial consumption and mass production, craft and the act of making – taking time and being mindful – is a radical form of resistance, selfcare and agency that leads us to our own emancipation whether from addiction to mass produced goods, poor health, loneliness, loss or injustices.