As the Writing Squad recruits its seventh group of talented young authors, Danny Broderick and Steve Dearden explain how their formula breaks down the barriers to writer development. 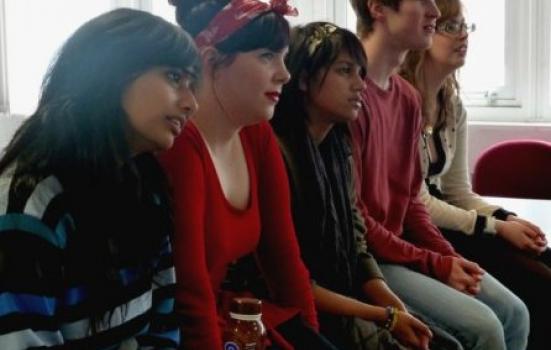 We don't see the "Oh shit" moment too often these days. We used to see it on the faces of visiting tutors when they realised that the Writing Squad was not just another bunch of hopeful, young writers. They were writers who were hopeful, but more importantly, their time with us had led them to expect something different to the typical higher education creative writing courses or other workshop for young people in the arts sector.

The Writing Squad began in 2001 and is supported by Arts Council England (ACE). We set it up because, unlike for fine artists, actors, dancers and musicians, there were no progression routes from being switched on to writing at school into the profession. There were no undergraduate creative writing courses and very few MAs, so we were coming across writers in their thirties and forties who had had no technical or craft training.

It is only by remaining focused, independent, free-thinking and fleet of foot that we keep up

In our first year we welcomed twenty 16 to 21 year-olds from Yorkshire to the programme. Since then 111 Squad members have taken part in our two-year programme of workshops, one-to-one sessions and creative projects, with continued professional development after that. We are now recruiting our seventh squad in which writers in the 16 to 21 age bracket become part of a community of dedicated practitioners made up of their peers, professional guest tutors and lead artists. The Squad is co-directed by writers Steve Dearden and Danny Broderick and administrated by Rachael Harrison, all part-time, with specific expertise provided by freelance writers and tutors. We are a virtual organisation with no premises so our funding is focussed exactly where it is most needed and most beneficial: on the writers and their development.

In the 13 years since the Writing Squad began we have expanded, developed and refined what we do. We now work with Manchester Literature Festival and New Writing North, and with their help we reach young writers based in or from the whole of the north of England. Trains, technology and coffee shops equip our flexible approach to working that fits around the squad members and gets around the challenges of our wide geographical spread.

We do not blow our own trumpets much, but we are proud of the Squad members and their work. That is why in 2013 we began PUSH, a regular webzine showcasing their work. We promote it offline and online to the reading and viewing public, but also to the publishers, promoters and producers who can take a writer to the next stage. It also helps our writers begin to build their own audiences, something we encourage and support them to do. Marx was right, don't wait to be endorsed by Faber or Broadcasting House, control your own means of production and distribution and win the endorsement of your readers and audiences. Faber, fame and fortune may come later.

The Squad is not a formal course. We respect the work of universities, colleges and new writing organisations; they are part of the same ecology and we encourage our writers to take any opportunity they offer. We are just one part of the road map to becoming a successful writer. But the investment made by ACE enables us to offer something very different to those organisations for whom young writer development is only part of a wider educational or artistic programme.

Because it is the only thing we do, writers are the centre of our process – they define and shape us. We have all the time they need, we are here whenever they need us, and there is not something else we have to, or would rather be doing. Playwright Mwewa Sumbwanyambe says: "The Writing Squad has been in my corner since the very beginning of my career. Without its initial creative and financial backing and then the continued encouragement and support, I have no doubt that each stage of all the progress I've made over the years would have been a million times harder."

This is how our process works:

The changing ways in which literature, theatre, film and music are made and distributed are always reflected in why, how and where our young writers write. Their content, their ideas, their interests and politics, intertwined with changing technologies and media, often place them ahead of us in understanding the current state of culture. It is only by remaining focused, independent, free-thinking and fleet of foot that we keep up. It is the only way we can avoid having that 'oh shit moment' ourselves.

Danny Broderick and Steve Dearden are Co-Directors of the Writing Squad.