As the funding environment of the cultural industries in the UK continues to evolve, a greater focus is being placed on the connection between the cultural and commercial value of the tangible and intangible outputs of creativity. Sarah Thelwall explores the value of practice-led research through long-term research-based relationships with higher education Institutions. 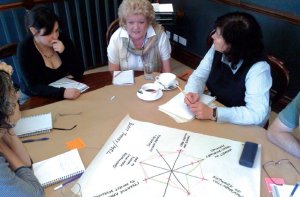 More arts organisations are starting to think about the commercial value of their work, partly as a short-term response to a need to diversify their income streams (but perhaps also due to a sense that the grass is financially greener on the commercial side of the fence). Sometimes this exploration of the fiscal value of the arts is through the instrumentalisation of creativity as opposed to its intrinsic value; at other times it is through the direct commercialisation of creative outputs. But whilst it is possible for the commercial leveraging of the intellectual assets of an arts organisation to be embedded at its core, rather than on the periphery, this can be unpalatable, particularly for those arts organisations run as vehicles for the creative endeavours of their founders1.
An alternative model, involving support through higher education institution (HEI) partnerships and research council funding for the development of intangible assets for organisations whose processes are research-based2, holds more promise for some. Here are three case studies of arts organisations that have actively nurtured research relationships with HEIs and other research units (such as the research arms of various corporations) over a five- to ten-year period, which reveal the benefits of such collaboration:
• Proboscis has built its artistic practice around a research approach through collaborations with a number of HEIs including the Royal College of Art, London School of Economics, Birkbeck College, Queen Mary (University of London) and the Institute of Child Health.
• Blast Theory has developed a long-term collaboration with the Mixed Reality Lab at University of Nottingham.
• Scan has worked with a number of HEI’s and recently relocated to Bournemouth University to forge deeper connections across a number of departments.

Personal touch
An analysis of conversations with key people in each organisation reveals a number of recurring themes relating to the reasons why these relationships have been so successful and long-lasting. They are all built on personal relationships between one member of an arts organisation and one member of staff in the HEI. Whilst over time this extends into a much wider network of relationships between the organisations, it is this trusted personal connection which grounds the professional relationships, which sees both sides through the rough and the smooth of any project, and which transcends the differences of opinion which will occur in any project. This trust forms the basis upon which all parties in a project build a trans-disciplinary research approach. The process by which such approaches are negotiated is often built into the project timeline and milestones, and is iterative. This allows researchers from very different backgrounds – such as engineering and fine art – to sort through the layers of understanding and meaning which they bring to the work and come to not only a common understanding but also an exchange of ideas, which builds a richness and depth into the project. This would be hard to achieve in a project which only enabled an activity to be undertaken once, and not learnt from and refined.
Whilst the relationships between the arts organisations and HEIs are long-term and may span several three- to four-year programmes of activity, there are nonetheless lulls in activity. An arts organisation must therefore either be large enough to be running several multi-year projects or small enough to scale back its overhead base between major projects. In reality, only the former is genuinely sustainable, though the latter is a reasonable approach in the mid-term whilst an organisation builds its research reputation. The ability to achieve Independent Research Organisation (IRO) status represents a significant opportunity for arts organisations. IRO status is recognition by the research community for the quality of work undertaken by the organisation. It takes several years and multiple projects to demonstrate that an organisation merits IRO status.
Problems to solve
As interest in this way of working increases, a series of other questions need to be answered:
• By what means do the Arts Councils of England, Scotland and Wales recognise the value of this practice-led research?
• How could the Technology Strategy Board3 and Knowledge Transfer Networks4 work more closely with IROs?
• Can this area of arts and research collaboration be grown and if so what’s the potential for growth?
• What steps do we need to take in the next couple of years to increase the visibility of arts organisations working in this way so that a cluster can be recognised, learning can be shared and value can be articulated?
• How many arts organisations might reasonably be expected to achieve IRO status and how can they be supported through this process?
Organisations such as Proboscis, Scan and Blast Theory are very adept at working as peers with partners who wield larger budgets, more staff and greater geographic coverage. This says a great deal about the quality of their work, their communications skills and their ability to negotiate complex relationships. In April this year, Giles Lane, Tim Jones and I ran a one-day event with a cluster of small arts organisations to look at where to take this work next. It became apparent that there are a number of organisations who would like to develop either their existing or new research relationships. A few organisations aim to achieve IRO status in the next two to five years. The relationship between these organisations and the Arts and Humanities Research Council (AHRC) will be critical to the successful achievement of IRO status.

Sarah Thelwall is Managing Director of www.mycake.org, an online toolkit for managing the financial side of business.
e: sarah@sarahthelwall.co.uk tim@solarassociates.net giles@proboscis.org.uk