We describe what we do as aerial theatre, and as it suggests, this means theatre in the air, writes Becky Truman.
Using our circus skills, we tell a story above the ground just as a theatre company may tell it on the ground. We are an eight-strong group of female aerialists ? we are not flying trapeze artists but execute a more bizarre concoction of skills. We spin hanging from feet, hands and necks, swing on flying ropes, dance on vertical ropes, enfold ourselves in strips of hanging fabric, throw and entwine with each other on the trapeze. Our forthcoming production also involves a flying bicycle, a giant birdcage and a girl trapped in a floating bubble! 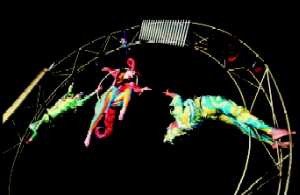 Throughout the fifteen years of Skinning the Cat?s existence, we have performed in as varied a cross-section of situations that a circus company can. With the increasing trend for large-scale spectacles, we have produced shows for corporate and site-specific occasions. Hanging from hot air balloons, from the top of castle walls and viaducts, we have been able to turn any space into an aerial extravaganza. Working as self-contained acts we have performed in pantomime as ?The Flying Carpets? in Aladdin, variety shows (chiefly in Germany where they are traditionally popular), and back-to-roots in traditional circus shows including the Moscow State Circus where we performed in the oldest circus building in Russia.

The dominating thrust of our work in these years has been touring the outdoor street festivals of Europe on a giant aerial structure, known to us as ?the rig?. From the countless tiny seasonal events to the enormous showcase festivals, every village, town and city presents performances in their summer programme. It is a circuit, the scale of which really must be seen to be believed. A favourite example of mine would be the Eclat Festival in Aurillac in the south of France. I am always excited when arriving at this huge collection of outdoor companies and seeing every space taken in the erection of fantastical structures by groups who I have followed for years.

Working outdoors and setting up circus equipment that is potentially dangerous when wet is a very tough life, make no mistake. Freezing rain all day when there is a show scheduled for the evening and an eight-hour set-up means that you work with the hope that at show time the clouds will clear, because believe me, the people will come anyway!

A typical day in the life of Skinning The Cat would be to arrive in Spain having driven from Holland (tour plans never being as straightforward as you might like) to find that we are playing in a market square. There is a row of elderly people dressed in black, sitting on a bench or playing cards. They will silently watch as a bunch of travel-weary girls drag an enormous amount of heavy equipment from a truck, and interspersed with some serious food breaks, we slowly assemble our nine metre aerial structure. Whilst we hammer in stakes and put up scaffolding props, the elderly group continues to silently watch, as we prepare and eat our dinner, do our warm-up exercises and put on our make-up. Finally, we emerge as completely different magical characters and execute our show. Finally, they smile at you and shake your hand ? and that is a good feeling.