Scotlands non-national museums and galleries are to be recognised for the first time through a new scheme that aims to make sure that important collections are identified, cared for, protected and promoted to a wider audience. The Significance Scheme, backed over the next two years by £1m from the Scottish Executive, will be managed by the Scottish Museums Council.

New research into inspiring learning in galleries has been published by engage, the national association for gallery education. Using three regional groups of teachers, galleries and artists to investigate the benefits of engaging with contemporary art, the enquire programme found considerable advantages to learning in spaces outside the classroom. Recommendations include investment in gallery education work, improvements in training and pay for gallery educators, and long-term research.
w: http://www.en-quire.org 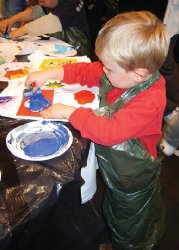 Several hundred 1425 year olds took part in the e-volve festival last month, to encourage participation in the Duke of Edinburghs Award scheme in London. Events such as DJ workshops, fashion seminars and arts workshops by Whitechapel Gallery (pictured) showcased the best new talent in the capital and let youngsters try new skills. The festival is the culmination of Reaching Out, the arts project for the Duke of Edinburghs Award London, which aims to deliver showcase opportunities and generate a collective approach to youth arts provision in London.

Heather Floyd, Director of the Community Arts Forum, Belfast, the umbrella and networking organization for Community Arts in Northern Ireland, has won a Women of Achievement Award in recognition of her work in arts-led regeneration and development projects, and the impact they have had on social cohesion.

Six new pianos with a value of over £2m are being acquired by the Royal Northern College of Music the largest single investment in new quality instruments ever made in Europe. The contract with the Musical Instrument Finance Company, part of Arbuthnot Latham & Co, the private bank, guarantees that the instruments, from Yamaha, Bösendorfer and Steinway, will be replaced with new pianos on a five-year rolling programme.

Productions in the main house and the new second auditorium at the Belgrade Theatre will begin in September 2007. The building schedule was delayed when contractors encountered unanticipated problems in joining the new extension together with the original 1950s listed building. Subject to a successful grant application, a separate phase of work to renovate the exterior of the theatre will also be completed without necessitating a second closure period.

A range of resources including case studies, articles and briefing notes covering pricing, marketing, data mining and sales process, are being made available online by Baker Richards Consulting. The materials are of particular use to performing arts managers seeking to maximise their earned income and optimise venue occupancy.
t: 01223 242100; w: http://www.baker-richards.com

Artist Links, a joint initiative to establish international partnerships between artists and art organisations, will run in Brazil from Spring 2007. Managed by Arts Council England and the British Council, the scheme follows the success of a programme with China which was established in 2002 and set out to foster cultural understanding between China and England. It supported a total of 56 projects and 82 artists. Artists from the UK and Brazil are being invited to apply for funding.
w: http://www.artscouncil.org.uk/artistlinks

Komedia, Brightons independently financed arts organisation, is preparing to export its café-style programme of cabaret, music and comedy to an empty city centre cinema in Bath. The grade II art deco picture house, The Beau Nash, was previously operated by The Odeon group. A lease for the building is being finalised with Bath & North East Somerset Council, and Komedia intends to open the venue in time for the citys Fringe Festival next June.

TAG Theatre Company has launched its first ever online video collection, celebrating its work and featuring an interview with Ewan McGregor. The collection also appears on YouTube, the world's fastest growing and most popular online video portal.
w: http://www.tag-theatre.co.uk; http://www.youtube.com/profile?user=tagtheatre