The Shadow Culture Secretary said “a crude skills and salary approach to migration simply won’t work for the creative economy”. 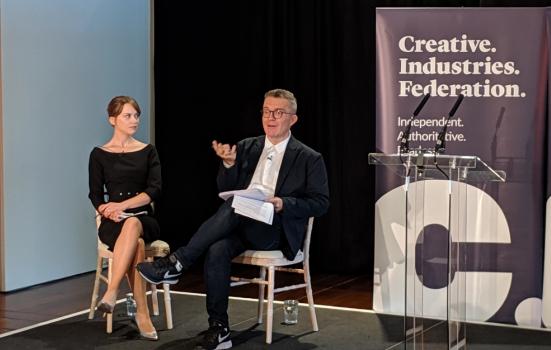 A Labour government could pilot a tourism levy and introduce tax reliefs for literature and podcasting, the Shadow Culture Secretary Tom Watson has said.

Speaking at a Creative Industries Federation event in London, Labour’s Deputy Leader also expressed his view that a public vote was the best way to resolve the UK’s Brexit deadlock, saying a general election “could fail to solve Brexit chaos”.

Discussing policy measures a Labour government could take to support culture and creativity, Watson said: “We want to give communities more of a say in their own cultural provision. So we’re considering a pilot for a tourism levy. This could offer local authorities another avenue for investing in local tourist attractions, including arts and culture venues.”

“With the Commonwealth Games ahead, Birmingham is a clear candidate,” he added. “But we’re keen to hear the views of other local authorities and city regions too.”

Stressing that Labour had already committed to maintaining the Government’s tax reliefs for the creative industries, Watson said: “Now we’re considering how they could be reformed to improve inclusion across the industry.”

He added: “We’re looking at how existing reliefs could be expanded…what we’re considering is a model for a tax relief for literature, and how similarly [we] could support emerging mediums like podcasting too.”

He continued: “We’re looking at how new initiatives like a UK ‘Town of Culture’ could help to jump start creative economies outside of our big cities”.

Watson added that Labour would put “creativity back at the heart of our curriculum and our classrooms”.

He reiterated Labour’s policy of reviewing the EBacc performance measure and introducing an ‘arts pupil premium’ to provide a boost of £160m a year to the arts in primary schools.

Watson also said there was a need for greater support from central Government for small music venues to help nurture emerging talent.

He commented: “At the moment, the tax and legal system looks at music venues like they are places of commerce where people drink beer and occasionally watch and listen to music. It seems to me that these are crucial venues in their own right, and the tax arrangements we have are failing to recognise just how vital those small venues are for the talent pipeline in your sector.”

He continued: “I’ll always remember Oasis playing the Adelphi in Hull in 1988. The Adelphi thankfully is a music venue that survives and needs our cherished support, but there are so many dozens of music venues that are currently under threat or have already closed.”

Watson also diverged from Labour’s stated Brexit position by saying that if a general election was held before a second referendum on Brexit, Labour should “unambiguously and unequivocally back remain” going into it.

He said Parliament’s first priority when it returns from its current prorogation should be to stop a “disastrous no-deal Brexit”. He said that ending the ability to cross borders easily would have a “disastrous” impact on areas like touring and that leaving the EU would mean losing funding schemes and the UK’s role as a data flow hub.

He added that “a crude skills and salary approach to migration simply won’t work for the creative economy”, because the pay of many skilled professionals is below the £30,000 threshold.

He called the UK’s ‘settled status’ system for EU citizens a “national scandal” that would weaken the creative workforce. “Every day, we hear about EU citizens seeing their applications rejected, although they’ve lived here for years”, he said. He added that a third of workers in visual effects came from the EU, as did a fifth of those in architecture, video games and the performing arts.