Labour manifesto promises to deliver culture for all

Labour’s draft manifesto outlines plans to put creativity at the heart of education and make a £1bn investment in ‘creative clusters’, but offers no increases in direct funding for the arts. 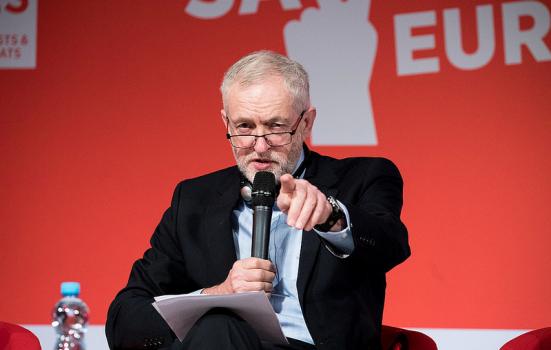 A pledge to deliver “culture for all” is among a raft of proposals put forward in Labour’s draft manifesto for the forthcoming general election.

The manifesto presents a series of measures that will “do more to open the arts and creative industries to everyone,” although it makes no commitment to increasing direct government funding.

Instead, it sets out a series of aims for culture and the creative industries, including:

The manifesto identifies the creative industries as “the envy of the world, a source of national pride, a driver of inward investment and tourism and a symbol of the kind of country we are now and aspire to be in the future”. As Britain prepares to leave the EU, it states that Labour will “put our world-class creative sector at the heart of our negotiations and future industrial strategy”.

The manifesto makes no mention of the increases in direct funding announced by leader Jeremy Corbyn during his leadership campaign last year. At that point he pledged to reverse the Conservatives’ cuts to arts, libraries, theatres and museums.

Instead, investment in the arts is now proposed in the form of a five-year £1bn ‘Cultural Capital Fund’, administered by Arts Council England, that will invest in creative clusters across the country.

Labour is proposing a similar model to that applied in enterprise zones, aiming to upgrade cultural and creative infrastructure “to be ready for the digital age”. The fund would be available over a five-year period, and would be “among the biggest arts infrastructure funds ever, transforming the country’s cultural landscape”. Its main focus would be on “projects that could increase museums’ and galleries’ income and viability”.

Whilst Labour will guarantee to cover any shortfall in EU Structural Funding that occurs as a result of Brexit, there is no such commitment to Creative Europe, the European Commission’s seven-year funding programme for the cultural and creative sectors, which was launched in 2014 and will extend beyond the date when Britain is due to leave the EU.

Arts in education is highlighted, with Labour promising to “put creativity back at the heart of the curriculum”.

Although there is no firm commitment to introducing an arts element to the English Baccalaureate (EBacc), the schools’ performance measure would be reviewed to “stop the arts being side-lined from secondary education”. The manifesto states: “We will not improve standards at the expense of narrowing the curriculum.” A Labour-led education system would, it says, “enable each to find their path through a breadth of choice in courses and qualifications”.

If elected, the party will introduce an arts pupil premium to every primary school in England: “A £160m per year boost for schools to invest in projects that will support cultural activities for schools over the longer-term.”

To boost employment in the cultural sector, Labour says it will launch a nationwide creative careers advice campaign in schools, “to demonstrate the range of careers and opportunities available and the skills required in the creative industries, from the tech sector to theatre production.”

The manifesto notes that “being a performer is a great career, but too often the culture of low or no pay means it is hard for those without well-off families to support them”. Labour says it will work with trade unions and employers to agree sector specific advice and guidelines on pay and employment standards that will “make the sector more accessible to all”. Finding “rapid solutions to improve diversity” is seen as a priority.

Freelance workers in the arts could be affected by the party’s pledge to “clamp down on bogus self-employment”. It plans to shift the burden of proof relating to freelance status, “so that the law assumes a worker is an employee unless the employer can prove otherwise”. This measure, it says, is in response to “mounting evidence that workers are being forced into self-employment by unscrupulous employers to avoid costs and their duties to workers”.

The manifesto's section on Sport opens by saying "Sport must be run in the interests of those who participate in it and love it, not just for a privileged few." This simple principle is (still) sadly missing from, badly missed in Labour's Culture for All section, and in its approach to the arts in particular. The bold institutional changes which underpin many good parts of the rest of the manifesto are essential if we are serious about culture and arts for all. Labour should be courageous and not cowardly in rebalancing and redistributing cultural funding across the UK and away from the affluent parts of London and the South East. It should be devolving funding and decision making to cities and regions, and enabling local authorities to support far more than libraries, museums and galleries - essential as these are they are only part of what's needed for vibrant local cultural ecologies. And when will Labour recognise that the annual hundreds of millions of Lottery pounds for the arts need to be directed very substantially back towards the arts and cultural work in the country's poorest communities? And why just 'performers' ? What about the 'great careers' of artists, makers, composers, writers, directors, choreographers, backstage, admin and the rest of the arts and cultural workforce?