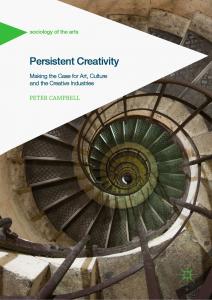 I thought I knew what to expect when seeing the (rather long) title of this book. In my mind, ‘Persistent Creativity – Making the Case for Art, Culture and the Creative Industries’ by Peter Campbell would be just that: a book highlighting the positive benefits of creativity that the sector could use for advocacy purposes. Except that it isn’t. At all. Instead, Campbell provides a critique of how the case is made for the arts, culture and the creative industries by policy makers, academics and the sector itself, who have together created and perpetuated what Campbell describes as the “creativity agenda”.

Campbell sets the scene for this creativity agenda, introducing the now familiar and popular concept of the creative economy, with its associated creative industries, creative cities and creative workers. This is the notion that creativity is the key to economic progress in post-industrial societies. Although this is a relatively modern idea, with its origins in the 1990s, the author takes the reader on a historical tour of how we have arrived at where we are today. It makes for fascinating reading.

Throughout, Campbell introduces questions that many of us have wrestled with at times – what exactly is creativity, what is its relationship to ‘culture’ and what exactly is meant by the term ‘creative industries’? What sub-sector is a cultural industry and what sub-sector is a creative industry? Is it time to mark clearer boundaries between them?

It is head-spinning stuff at times, and highlights just how muddied the waters can become. As someone who works in an organisation that has both ‘creativity’ and ‘culture’ in the organisation, this chapter provided much food for thought. Mercifully, there is no attempt by the author to define the term ‘creativity’, although this question is at the heart of the book. Campbell instead uses the literature to show just how many differing views there are of creativity. He postulates that this is why the creativity agenda developed, and continues to flourish today. It is precisely because creativity means different things to different people that it can be used in a myriad of different ways and used to push various agendas.

Campbell also charts the rise of evidence-based policy, where figures and economic performance are required to justify funding. He argues that the evidence created by the sector is never sufficiently robust or longitudinal enough to really back up claims made for the power of creativity, particularly when it comes to urban and social regeneration. Campbell doesn’t seem to blame those working in the sector for this lack of robustness – he provides mitigating reasons as to why this is and what the challenges are (anyone reading this will be familiar with these).

His focus is more on the way that politicians, local governments, DCMS, arts councils and other policy makers espouse the benefits of creativity in sweeping statements without being able to actually back up these claims with the figures: they say they know that creativity is key to future economic success, but can’t always provide the evidence to prove it. Either that, or that the evidence is emerging (although it should surely have emerged by now). Campbell shows how regular reference is made to the successes Glasgow and Liverpool (one chapter focuses specifically on Liverpool) have made of holding the European Capital of Culture title. But he cautions that figures have been subject to exaggeration and/or misinterpretation, or that longitudinal evidence simply doesn’t exist.

Despite this, the creativity agenda, as defined by the author, persists. It can be seen on an almost daily basis. Place-based initiatives are still popular with Government and policy makers, as they attempt to stimulate urban and social regeneration and rebalance the power of the cultural sector from London to the regions. The Great Exhibition of the North and Manchester’s recent announcement of a ‘Town of Culture’ competition are proof if ever we needed it. And perhaps Campbell is right that that this isn’t a particularly creative way of being ‘creative’ anymore. As he rightly points out, creativity is still seen by academics and policy makers alike as indicating something new, fresh and exciting – despite it being in fashion since the 1990s.

This book provides a fascinating context for contemporary cultural and creative policy, and the topics covered are incredibly well researched. It is both challenging and inspirational, but makes for uncomfortable reading at times. Campbell suggests that until the concept of creativity is made more precise, challenges and squandered opportunities will remain.

But we’ve been here before. At Creativity, Culture and Education, we have a clear definition of creativity, and an established approach for incorporating this into our learning programmes to provide teachers and learners with the means to thrive. But this might not be how creativity is defined by someone else. We often see creativity automatically being associated with ‘the arts’ – but this patently isn’t true in my mind.

Has the creativity agenda perpetuated this? Perhaps policy makers have hijacked the term ‘creativity’ and mythologised it to a certain degree, using it for their own means. But if so, how do we wrestle it back? How can we avoid creativity becoming what Campbell calls a panchreston: ‘an explanation or theory which can be made to fit all cases, being used in such a variety of ways as to become meaningless’? Do we even need to while the ‘creativity agenda’ remains persistent? Like Neo in ‘The Matrix’, the choice is yours: take the blue pill and remain in the creativity agenda; or take the red pill and enter a new reality…

Andrew Garrad is Projects and Information Officer at Creativity, Culture and Education.
creativitycultureeducation.org