Anne de Charmant reveals the people who have inspired her work, particularly in rethinking audiences’ relationships with contemporary art and the environment. 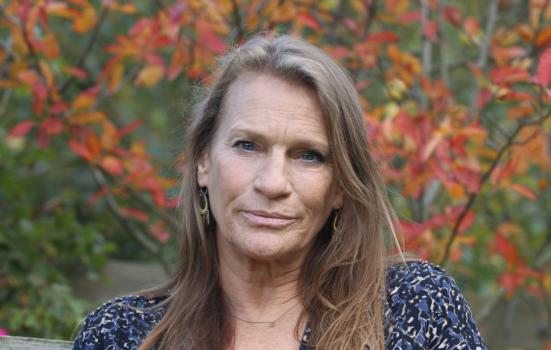 As Artistic Director of Meadow Arts since its foundation 20 years ago, Anne has been challenging expectations about art: who it is for, and how and where it is produced. These are the people who have influenced her work.

I first encountered Eliasson’s work at the Scandinavian pavilion of the Venice Biennial about two decades ago. It was a walkthrough kaleidoscopic sculpture in shiny stainless steel, which twisted and turned the gaze in all directions, swallowing up expectations of what was out and what was in, only to spit you out at the other end, breathless and altered.

My next experience was his Weather project in the Turbine Hall of Tate Modern, where visitors were invited inside a gigantic machine that created its own weather. People engaged with the installation, ambling or lying down on the concrete floor to look at the huge, mirrored ceiling under a yellow sun, bathing in a hazy atmosphere. It remains to this day my favourite piece of public art.

The power of Eliasson’s art is to confound expectations, to enable the viewer to receive new information. This is political work at the service of the environment.

This French philosopher has a perception of landscape, nature and site that nurtured my reflections on how we as humans in the western hemisphere relate to our environment; how we read it; and why and how we constantly try control it. For her, the confusion between the notions of landscape and nature poses a problem.

She holds that the landscape is a constructed form, an invented concept that can be traced back to the advent of painting with its components of framing and, especially, perspective. This is so ingrained that we unconsciously reject anything that diverts from that model and applaud any site that conforms.

Cauquelin calls this “bourgeois-ification” of our gaze. It is more urgent than ever to unfold this assimilation of landscape with nature and the environment. The opening of new dimensions such as a shift to more diverse cultures, to the digital sphere or space exploration has barely dented this perception.

In many ways I feel that if art is to blame for the invention of landscape, then contemporary art might be a tool to break open the mould. This is what Meadow Arts aims to do.

I include Sir Nicholas here not as chair of Arts Council England, nor as an art historian or curator, but solely because of his achievements at Tate. While recognising that he had a formidable team behind him, the success of Tate demonstrated to the public and politicians alike that the art sector is immensely important, drawing in millions of visitors and just as many pounds into the economy.

In a country where the Ministry for Culture is little more than a political placeholder for internal governmental manoeuvring, leadership in the arts is rarely recognised in wider society. Although of course we have fantastic leaders of large and small arts organisations making great art happen every day - with courage and talent, despite restricted means.

But to the powers that be and society at large, this is often taken for granted and passed off as a mildly eccentric sector of society that can continue to do its thing, with minimum support and on an ever-smaller part of the budget. Call me a cynic, but the arts need great champions and irrefutable successes if we are ever to be justly valued and supported.

By trade Clément is a writer and a ‘paysagiste’. This French term has no real equivalent in English but can best be translated as landscape gardener or designer. He has made large scale ground-breaking gardens from Chile to Paris. He is also a scientist and a philosopher who has evolved very interesting conceptual tools.

The first is the ‘Jardin en mouvement’, the moving garden, where a site is open to spontaneous growth, cross pollinations and accidents. The role of the gardener is to gently manage the natural movement and to observe and learn.

Another is the ‘Jardin planétaire’, whereby the Earth itself is a gigantic garden open to migrations of plants and species. And a third is the sum of all sites untouched by man, wastelands and marginal spaces left behind by man’s mismanagement. Its objective is “to encourage biological diversity, a source of wonder and our guarantee for the future”.

As a young journalist for a French cultural TV programme, I was assigned to interview Louise Bourgeois. Things went wrong very quickly:  I was slightly unprepared and was not sufficiently aware of her work. She was struggling to make her mark in her career and often went unrecognised in the male dominated, monolithic art world of the time. She was more admired than acclaimed.

I didn’t know of her reputation for being formidable, challenging and very direct. She talked about her current work (the ‘Fillette’ series of phallic sculptures) with incredible force, commitment and pugnacity. As a woman artist she saw that her work disturbed the status-quo. Decades before #MeToo she spoke about abuse and childhood trauma.

The intensity I witnessed can be felt in all her rich oeuvre - one of the most important of the late 20th and early 21st century. The interview aired and all signs of my having been put through the wringer had vanished, but it left me in a state of shock, having received a magnificent lesson in the art of being a woman and an artist.

Anne de Charmant is the founder and Artistic Director of Meadow Arts.

A new book, Meadow Arts: the first 20 years is out now.

Meadow Arts’ next exhibition, All Alone: Contemporary art and aloneness opens at Croft Castle Fishpool Valley from 26 July to 19 October.