My Gurus: Storytellers show people they are not alone

This year, the Bush Theatre celebrates 50 years of discovering and developing new writing. Its Artistic Director, Lynette Linton, reflects on the people who influenced her creative journey. 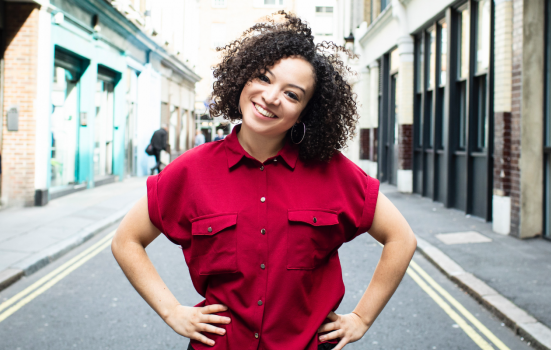 Writers, actors and directors have had a profound influence on Linton’s choice of career. Once she began to read seriously, and see her lived experience reflected on the page, her mind was opened. That openness has served her well.

When I was 14, I read Malorie’s novel Noughts and Crosses. It affected me so powerfully that - without a second thought - I immediately tried to write my own version. It was that inspiring! Until that point, I hadn’t come across many black British characters in books, nor on screen.

Noughts and Crosses was easy to read and beautifully written but, most importantly, it made me feel seen. I cried for days after. Malorie is a very important writer for people of my generation. Without her influence I don’t think I’d have become playwright.

I first read Baldwin at the university of Sussex where I was studying English. His essays and novels fundamentally changed the way I saw the world. I completely related to the way he spoke about society and art and his writing opened my mind in a way I’d not experienced through literature before.

He used storytelling as a way of showing people that they are not alone. I’ve always hoped my work would do the same for others. One of my favourite quotes comes from his work: “You think your pain and your heartbreak are unprecedented in the history of the world, but then you read.”

Rikki and John run an artistic powerhouse, the Team Angelica family of creatives. When I was living at my family home in Leytonstone, trying to work out what I wanted to do, I was a member of the National Youth Theatre.

It was there Rikki saw something in me that I hadn’t seen myself. He encouraged me to visit Angelic Tales, a new writing festival at my local venue, Theatre Royal Stratford East. There I first met John, who quickly encouraged me to submit my writing.

This led to my first play, Step, about a young man working out his sexuality, very much inspired by James Baldwin. But as I began to shadow Rikki in his work, I realised I was a director.

Christopher was Artistic Director of The Gate theatre in London. I’d applied – unsuccessfully - for a role there. But to my surprise, he invited me for tea and instead offered me a position as Assistant Director on his new show.

He was the reason I was able to leave my day job working behind the counter at John Lewis for a career in the arts. As I sat at a desk next to him, I could closely observe how skilfully he ran his organisation. Working with him, my confidence began to grow.

I assisted Michael on The Lieutenant of Inishmore at the Noel Coward theatre and he gave me confidence to speak up in the rehearsal room. Since then, he’s been my mentor, always available at the end of a phone. He’s a wonderful man and a marvellous director who has helped shaped British theatre.

I have to thank both Michael and Chris for encouraging me to apply to be Artistic Director of the Bush.

Although she’s now known to millions as Lady Danbury in Bridgerton, I grew up watching Adjoa on popular British TV shows like Casualty. I thought she was wonderful. When I directed Assata Taught Me at The Gate, the writer Kalungi Ssebandeke and I were both astonished and delighted when we managed to cast our idol.

Adjoa became an auntie and mentor, but we also became friends and colleagues. In 2019, we co-directed the first ever company of women of colour in a Shakespeare play on a major UK stage - Richard II at The Globe.

Adjoa is not only an incredible actor and director but also a champion of black women. I’ve learned so much from her.

The first time I applied for a job at the Donmar Warehouse, I didn’t get it. But I did meet Josie, who’d previously been Artistic Director at the Bush. I was disappointed but I tried again a few years later – this time with success – and went on to spend a year as an Assistant Director there. I never assisted Josie, but she was always very supportive of my work.

After I left the Donmar, she came to see a show of mine at ArtsEd, uninvited and unannounced - terrifying at the time! She went on to offer me the opportunity to direct Lynn Nottage’s Sweat at the Donmar, which transferred to the Gielgud Theatre, was nominated an Olivier award and won the Evening Standard award for Best Play. She had the courage to take a chance on me as a young director. It was life-changing.

Lynette Linton is Artistic Director of the Bush Theatre, London.

My Gurus: Storytellers show people they are not alone