Composer Laura Bowler reveals what she has learnt from the arts management side of her career. 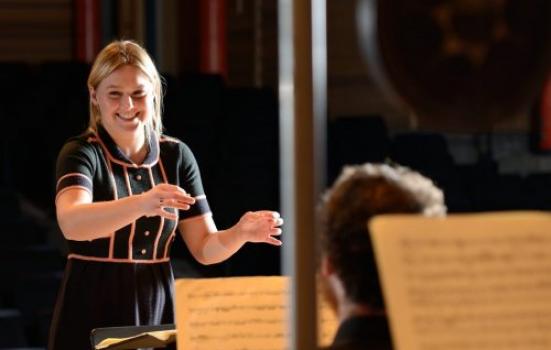 Artistic Director of Lands End Ensemble (Canada) Jan 2012-present
My role as Artistic Director of Land’s End Ensemble is varied and exciting. Not only do I have the responsibility of programming the ensembles seasons with new, innovative chamber music from across the globe, I also conduct and perform with the ensemble. This role is varied week by week ranging from listening to and reading hundreds of scores to checking the copy for marketing materials. This role also enables me to bring a vast array of music to Western Canada that has previously not been performed there.

Artistic Director and Founder of Size Zero Opera 2007-present
As the Artistic Director of Size Zero Opera my role is hugely diverse ranging from running around for last minute props, liaising with opera agents, composing operas to performing as a mezzo soprano or directing some of the productions. As the company has grown since 2007, my role has now been delegated to several fantastic individuals without whom Size Zero Opera wouldn’t be able to do the fantastic work we do with emerging opera creatives, composers, librettist, designers, directors and singers. Although it isn’t all fun and games as there are many, many hours spent on the essential funding applications!

Composer in Residence Manchester Camerata Sound and Music Embedded 2013-14
As part of my composer in residency with the Manchester Camerata Orchestra I will write one chamber work that will be performed in January 2014 at the Royal Exchange Theatre in Manchester, as part of a music theatre concert that I will also be directing. The second work will be a larger scale orchestral piece which will be performed at the Bridgewater Hall in May 2014.

Assistant Director Opera Holland Park Production of L’Elisir D’Amore Summer 2013
As Assistant Director to Pia Furtado and liaising with the Opera Holland Park Company Office I have gained huge amounts of experience in another large scale opera company, from which I can take invaluable insights into my company, Size Zero Opera, to ensure its continuing success. My role ranged from scheduling to creating chorus reference notes and the occasional stern email.

Assistant Director Glyndebourne Production of The Yellow Sofa Summer 2012
As Assistant Director to Frederic Wake-Walker and through liaising with the Glyndebourne Company Office, I gained invaluable administrative and artistic experience. I was responsible for the direction of the cover cast for The Yellow Sofa as well as scheduling the rehearsal period, and providing both practical and artistic support to the Director of the production. This has to be one of the most enjoyable temporary positions I’ve held.

Composer in Residence Banff Centre, Canada Sep-Dec 2011
Any composer who has the privilege of taking up a composer in residency at the Banff Centre will realise that all one needs to write half decent music is Canadian Rockies as a backdrop to your writing desk! The months that I spent in Banff introduced me to many international musicians with whom I am sure I will collaborate with in the future. It also enabled me to forge strong relationships with several Canadian musicians and inspired me to apply for the role of Artistic Director of the Land’s End Ensemble.

Composer-BBC Symphony Orchestra Sound and Music Embedded Commission and the LPO Leverhulme Composer’s Scheme Commission 2012-2012
As an emerging composer these schemes and commissions are essential to not only your growth as a composer but also as an opportunity for the general public and fellow musicians to hear your music in performance presented by a professional orchestra. Both opportunities were hugely influential in the development of my compositional voice but also in the development of my communication skills to orchestral musicians. These skills have transfered into my work as an Artistic Director and as an Opera Director.

Commissioned Composer, Various projects, 2007- 2012
My commissioned work as a composer has involved everything from Performing Guerilla Opera at Selfridges to composing excerpts of operas for possible future development at the Royal Opera House as part of their Exposure programme.  My background writing opera and music theatre works have also led me to write incidental music for theatre productions at RADA.  Collaborating with directors and stage technicians was an invaluable experience for me, and has allowed me to build some extremely useful relationships with other theatre professionals.