In the third of our series profiling the shortlisted candidates for City of Culture 2025, Ian Bancroft reveals Wrexham as “one of the last punk places in the UK”. 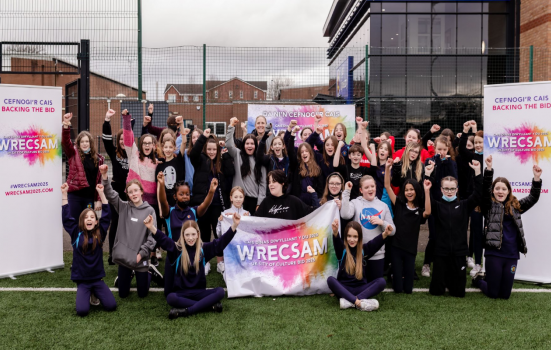 Sitting on the Welsh-English border, with the Cheshire Plain and rolling Shropshire Hills to its East and the rugged Welsh mountains to its West - and with sleepy villages, quiet farms and gentle countryside surrounding its eponymous market town - Wrexham County Borough (Wrecsam in the Welsh language) seems a sedate and unassuming place. But take a closer look and you'll see there's much more to it than first meets the eye.

Wrexham is a hidden gem.

The landscape is littered with remnants of an industrial past that forged Wrexham and has been part of shaping the modern world. From the bricks that built Britain's universities, to the cannon which armed both sides of the American Civil War and the beer that flowed as the Titanic sank: Wrexham was there.

Among its 140,000 residents over 70 languages are spoken. It’s a place where people have always come together – to do business, to make things and to have a good time. It’s a place that surprises you, where people do things differently - as one person put it: “Wrexham is one of the last punk places in the UK”.

It is a place I am lucky to call home. We now have an opportunity to inspire our younger people to achieve their dreams with the activities, creativity and confidence that come with the City of Culture 2025 title. As our slogan says, ‘we rise together’.

Our journey to the shortlist began in 2011, when Wrexham celebrated its Year of Culture: 365 days of performances, events and activities programmed and promoted in a coordinated way for the first time. The local authority managed the exercise, but the magic was in the passion, the drive and the raw talent of the people of Wrexham.

The diversity of the county's burgeoning, grass-roots cultural scene was plain to see, and the desire of the public, from Wrexham and across the UK, to come here to indulge in unique cultural experiences was proven.

In the years that have followed, Wrexham's cultural offering has flourished, having given rise to one of the UK's leading music showcase festivals (FOCUS Wales), a multi-award-winning cultural hub (Tŷ Pawb) and the UK's newest science discovery centre (Xplore!) to name but three. Its tourist sector has shown year-on-year growth and, through its Hollywood connections, brand Wrexham has achieved global recognition.

Culture does not exist in a vacuum

So, our decision to apply for the UK City of Culture title didn't come out of nowhere. It was a natural step on a journey from post-industrial malaise to a thriving, creative designation: connected with its past, but focused on its future.

We didn’t go into the process with our eyes closed. The title isn't a trophy to place in the cabinet, but a long-term investment to accelerate and super-charge the opportunities for a region which for too long has lacked financially what it needs to achieve its potential.

As such, it has required careful planning and the input of hundreds of people. If our plans for Wrecsam2025 had been developed in a silo, without being fully aligned and integrated with wider plans for the county's strategic development, they would have been doomed to fail: culture doesn't exist in a vacuum.

Why should Wrexham win?

Now is the time. Wrexham has a growing economy and cultural sector, a thriving and galvanised grass-roots creative community, and public, private and third sector organisations working together more effectively than ever. Walk down the street and there is a palpable sense of pride, of excitement, of hope.

It has the foundations built, with strategic investment in physical and digital infrastructure, in training, education and jobs. It also has the tools and structures to enable continued and strengthened partnership working, to become a place transformed.

There is also a critical need to nurture the next generation of architects (Thomas Telford), poets (RS Thomas and Evrah Rose), bands (The Royston Club and Kidsmoke) and our local university graduates and industrial apprentices to achieve their dreams.
Wrexham has a unique and important story that we want the world to hear. Our programme will be one of local relevance, and international significance that will empower local people.

And for those considering a bid to make their home UK City of Culture 2029, my advice is don't go it alone.

Over recent months hundreds of people, from all parts of our country and from all walks of life, have told us what culture means to them, how being named UK City of Culture 2025 could make a meaningful impact to their lives, and what they would hope to do as part of our Wrecsam2025 programme.

It has been a plan developed collectively, through conversation. If we secure the title, our success will be everyone's success. The collective experience, wisdom and creativity of our community has been our driving force. To be a part of it has been a thrill and a privilege.

To be shortlisted alongside Bradford, County Durham and Southampton is an honour in itself. All would be worthy winners. However, I sincerely hope and believe we can soon welcome you to Wales and say Croeso i Wrecsam2025.