New modelling from Oxford Economics says the country's creative sectors can more than recover from the loss of 100,000 jobs with the right investment. 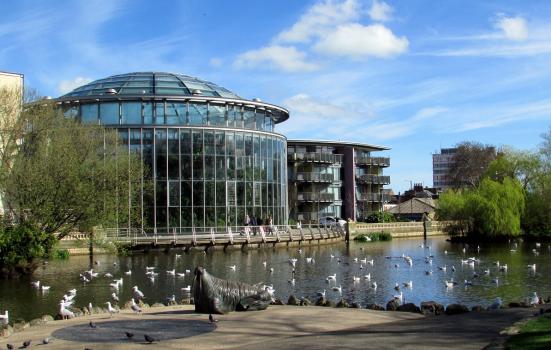 Sunderland, pictured, is trying to lever further creative investment to offset the damage of Covid-19
Photo:

The creative sector has lost more than 100,000 jobs and £12bn in economic value due to the pandemic - but there is opportunity to recover quickly.

New modelling from Oxford Economics says the right investment could deliver 300,000 new jobs to the creative industries and £132.1bn for the UK economy by 2025.

This would be £28m more than in 2020, a 26% increase in gross value added (GVA). That's more than the insurance, pensions and financial services industries combined and a greater growth rate than the UK economy as a whole.

£34.9bn - 20% more than the total public and private investment in the creative industries in 2019 - would need to be invested in existing schemes like the Creative Industries Clusters and Creative Careers programmes, as well as new initiatives.

Creative Group UK, created through the merger of Creative England and the Creative Industries Federation, called for an Innovation Enterprise Allowance to make entrepreneurialism less risky and an Innovation Employment Scheme that builds on the Kickstart Scheme.

The body also wants R&D tax credits expanded to include the arts, humanities and social sciences.

CEO Caroline Norbury said the sector is not asking for handouts.

"We are asking for meaningful, targeted investment in creative ideas, creative industries and creative skills, that can unlock the incredible potential of the creative sector to kickstart our country’s recovery, and that will be repaid many times over.

"The creative industries don't just make themselves money; they support whole swathes of the UK economy."

The report, The UK Creative Industries: unleashing the power and potential of creativity, says the creative industries generate half their value again through their supply chains - a total of £178bn.

The modelling shows the regions whose creative industries have the greatest economic impact are also those most at risk.

Wales and the North East of England add another £2.50 to the wider economy for every £1 produced by their local creative businesses, compared to 70p per pound in Scotland, which had the least impact on the wider economy.

Wales' creative sector has been hardest hit by the pandemic, losing one-fifth of its value (£200m) in 2020, and the North East "will be the slowest to bounce back", the report said, with jobs not expected to recover until 2023.

"The impact of the pandemic has made this work to support the city’s creative economy even more urgent. We’re looking to lever further investment to make sure we don’t lose the progress we have made.

"There is still huge untapped potential and significant opportunity for further growth."

In the West Midlands, which generated another £1.20 for each £1 of GVA according to Oxford, local authority research estimates the local cultural sector attracts £2.3bn in visitor spending.

The West Midlands Combined Authority (WMCA) this week released an interactive map of the sector and gave another £4m to Coventry 2021.

Martin Sutherland, Chair of the WMCA Cultural Leadership Board and Chief Executive of Coventry City of Culture Trust, said the map will be a valuable tool for thinking about the sector's next steps.

"From a business perspective, the arts and cultural sector has been one of the worst impacted by the pandemic.

"We are proud to have instigated this work and have found strength in collaboration during this extremely difficult year."

Music, performing and visual arts lost the most economic clout - about 39% of their GVA and a quarter of their workforce, Oxford Economics' analysis found.

Unsurprisingly, industries that rely on in-person attendance and freelance workers have been worst affected and are expected to recover more slowly.

Museums, galleries and libraries were a high earner pre-pandemic, generating £4.40 in the wider economy for every £1 directly produced. Due in part to their reliance on tourism, they have lost a third of their GVA and 13,000 jobs, 14% of the workforce.

Without intervention, modelling indicates they will be worth £64m less and provide 5,500 fewer jobs in 2025.

Some creative industries are growing despite the crisis: publishing, for example, has lost 12,000 jobs and £1.5bn in value but is still projected to grow by 2% over the next four years.

The report says that "at the heart of this analysis is a hard but crucially important truth".

"Without strategic government investment and the right policy framework, certain parts of the sector, people and places will be left behind, economically, those reliant on footfall and audiences, crucial parts of our workforce, including freelancers, and places, like Wales and the North East."

A current break for museums and galleries is due to expire in April and UK Music CEO Jamie Njoku-Goodwin said the music industry is one of few that doesn't currently benefit from the system.

Oxford Economics says the UK exported £58bn in creative goods and services in 2019. A third of that was to the European Union.

While there are new opportunities for trading recorded music and other digital goods in Asia and the Americas, and markets for crafts in Switzerland and jewellery in the Gulf states show promise, "these new agreements cannot replace" previous arrangements with the EU, Creative Group UK says.

"As our largest trading partner, the world’s biggest trading bloc and second biggest economy, the importance of negotiating improved trade mechanisms with the EU cannot be understated."

The Incorporated Society of Musicians (ISM) has this week criticised the Government for its slow progress on new European touring deals.

A letter to Prime Minister Boris Johnson said short or freelance work in Europe is "now virtually impossible for many creative professionals".

"Musicians and creatives cannot be left in limbo anymore, they deserve urgent action so that our industry can look to the future with some certainty."