Five major UK arts institutions are appealing for public and private investment after losing half their income due to Covid-19. 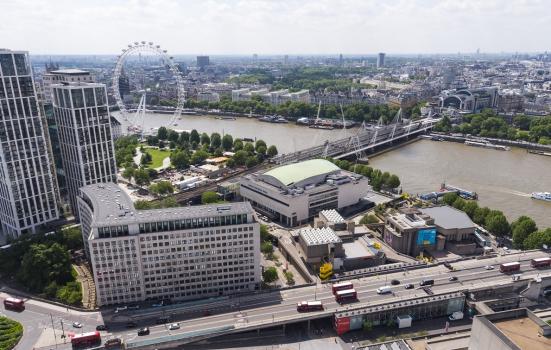 The economic impact of arts institutions on London's South Bank has fallen by £330m due to Covid-19, a new report claims.

The impact of the pandemic, however, is apparent: the organisations lost £130m - half their usual annual income - and received just £35.8m through the Culture Recovery Fund, £30.6m of it as loans.

Lambeth Council and the South Bank Business Improvement District's (BID) report is a transparent bid to attract more investment to the area, which it says has potential to grow further if improvements are made to surrounding amenities.

"With a combination of private and public investment it is clear that the South Bank and Waterloo cluster has the potential to play a significant role in the recovery of London and the UK both creatively and economically as lockdown restrictions recede."

The report claims the five organisations are responsible for £1 in every £25 spent by visitors to London and one in 17 jobs in the city's cultural tourism sector.

It bases this on an assumption that three-fifths of visitors' spending "can be attributed to the presence of the five institutions and would not have happened without them".

When asked how this was calculated, a spokesperson cited a 2018 study by the Association of Leading Visitor Attractions (ALVA) that it says found 50% of tourists cite the Southbank Centre - not the other institutions - as the reason for their visit.

However, ALVA could not locate the report and Southbank Centre declined to provide it, so ArtsProfessional cannot verify the "£1 in every £25" claim or the £510m GVA figure.

South Bank BID Chief Executive Nic Durston said that while the South Bank and Waterloo area is "uniquely positioned in terms of its world-class cultural cluster", the findings are of national consideration.

"We would encourage anyone working in town and city centre management to consider this report’s findings, and to place culture at the heart of any economic regeneration strategy that is planned, especially in the wake of the pandemic."

Seven in eight staff across the five organisations were furloughed last year, with 880 full-time equivalent roles made redundant.

Pre-pandemic, 45% of these institutions' income came from artistic activity but Covid-19 shifted the balance towards public funding: subsidies from Arts Council England were 42% of income last year compared to 30% in a normal year.

Rambert and Young Vic, having modelled different socially-distanced seating arrangements, decided against reopening to audiences at any point last year. Southbank Centre held one exhibition and the National Theatre pursued just two live productions - both were forced to close within a week of opening.

All five organisations expanded their digital operations and refocussed on outreach work. The Old Vic, for example, chose not to furlough its education team but spent time evolving its existing projects.

Executive Director Kare Varah said collaboration with its neighbouring institutions had been critical to its survival during the pandemic.

"We have worked to make the case for the societal and economic benefits of the arts and the positive impact it can have on us all."

Unsurprisingly, the lack of international tourism had a big effect on the economic productivity of the South Bank institutions.

Visitorship was expected to fall by more than 5.5m people.

While domestic tourism is high - one in six Londoners and one in 28 UK residents visited one of the five sites in 2018/19 - about one in every eight international cultural tourists visited one also, and they accounted for 80% of £780m spent.

Young Vic Executive Director Despina Tsatsas said the five venues considered in the report "represent the tip of an iceberg".

"As we look to reopen and rebuild, we know investment in culture will be richly rewarded; in the wellbeing we know art brings, in the freelance theatre makers we will nurture and support, and in the economic prosperity culture engenders."