DCMS had to wait for a green light from Lord Frost to begin bilateral negotiations on touring, few of which have been agreed in the six months post-Brexit. 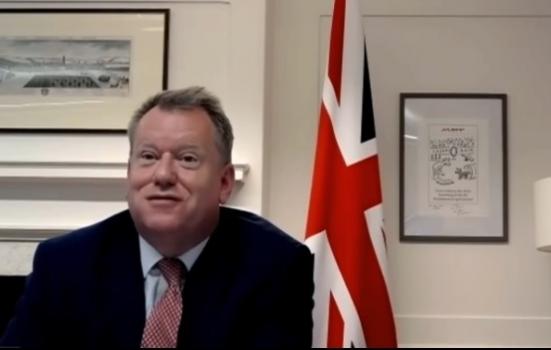 Lord Frost as he appeared before MPs at a DCMS Select Committee hearing
Photo:

Brexit Minister Lord David Frost has defended his record on touring arrangements in the EU though few bilateral deals have been struck.

Frost rejected suggestions from MPs on Tuesday (June 29) that he could have more quickly co-ordinated departmental responses to trade post-Brexit, allowing faster progress on touring visas and work permits for creatives.

Talks are ongoing with countries including Greece, Bulgaria, Romania, Slovakia, Croatia and Malta and Spain, where Trade Minister Greg Hands is meeting with his counterpart this week. DCMS Minister Caroline Dinenage said the UK was "still confirming arrangements" with Cyprus and Slovenia.

While Frost said departments needed time to "get to grips with an agreement that was the best part of 3,000 pages", DCMS Select Committee Chair Julian Knight said conversations should have started once it became clear the EU would not accept the UK's proposals.

"It's half a year since we left the EU and my sense today is that we haven't got a huge part of the way there yet.

"It's incredibly frustrating not just to this committee but to everyone watching at home that this six months have perhaps not been put to the use they should have."

Kevin Brennan MP accused Frost, who cancelled plans to appear before the committee earlier this month, of apathy: "You don't give a fig about the creative industries."

Frost responded: "I don't think any reasonable person could conclude that. We fought very hard [during] negotiations last year to find a conclusion that was consistent with the end of free movement as a policy and find a way forward."

Dinenage confirmed that her department, like all others, had to wait for the go-ahead from Frost before starting those negotiations.

She said "it isn't until you start working thorugh the fine print of those things and working through the implications that you become aware of issues" with countries such as Belgium, where negotiations have to take place with each of its 10 federated provinces.

However, Dinenage believed the scale of engagement presented "new opportunities", saying her counterparts in some EU countries are "really keen to talk about increasing the level of cultural exchange".

"Obviously we're not going to discuss them with the EU until we have decided what our preferred way forward is.

"It's a major priority for us and we hope to be able to deliver some results this year but it's a negotation; it's not in our control."

Echoing previous comments from Minister Dinenage, he said it would be "extremely helpful" if industry bodies participated in efforts to reach bilateral deals.

"They can use their relationships, their networks with similar bodies in other EU member states to encourage them to be less restrictive.

"That sort of help and support, that can make a big difference to this situation."

Several of the Government's apparent reasons for rejecting the EU's visa-free touring offer were not relevant to the final decision.

Asked whether the UK negotiated for visas for technical staff or sought to define 'ad hoc performance', Frost said negotiations "didn't get that far" because the EU demanded permanent visa-free short stays, which were deemed incompatible with the Government's immigration policies.

"The discussion rather went around in circles, which is why we put forward our own proposal around work permits."

Frost rebuffed calls to publicy release transcripts from the negotiations to preserve "good faith" with the EU.

He also took a shot at Sir Elton John, who has called Government ministers "philistines" for failing to secure a bloc-wide touring deal.

"I had a good conversation with Elton John. Obviously it was helpful to hear [his concerns] directly.

"I can’t help noticing that his first hits were before the UK even became a member of the European Union so I think there is probably more at play here than pure rules within the then-European Community."