Rehearsal complex to be a 'godsend' for freelancers

New Diorama Theatre will open a free workspace in July, welcoming up to 80,000 creatives per year: "We would be delighted if other places stole the idea and emulated it." 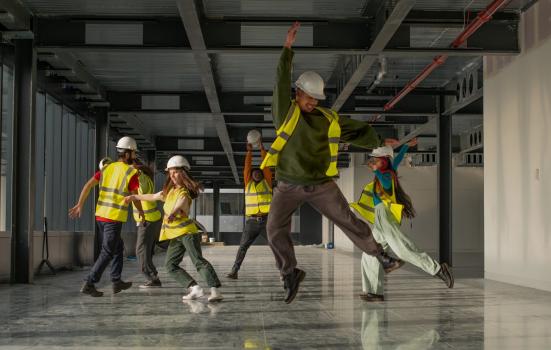 NDT Broadgate aims to be "an engine for change" in the post-pandemic recovery
Photo:

A free rehearsal complex opening in July will "be an engine for change" and a "godsend" for freelancers left alienated and under pressure during the pandemic.

Up to 80,000 creatives could use NDT Broadgate per year, providing independent and freelance artists with space to connect and innovate.

The partnership between New Diorama Theatre and British Land, which part-owns the Broadgate retail and office area in central London, will create 29 fully-equipped rehearsal spaces, design studios and meeting rooms in a 20,000 square-foot building near Liverpool Street Station.

New Diorama's Artistic and Executive Director David Byrne said the compay wanted to give opportunities to young people and early-career creatives who may have missed out over the past year.

The impetus behind the new Artist Reset Programme has been facilitating the best return to live performance possible and giving freelancers an "adrenaline shot" to get them back to work, he explained.

"It became obvious we were going to need a lot of space."

While the design and long-term use of the space and its relationship with the City of London and Culture Mile is yet to be cemented, Byrne said the initial response to the project has been "slightly overwhelming".

"I think this has really hit a nerve, which shows the real need and openness to working in new ways."

He said New Diorama and its partners had capitalised on a conundrum facing many urban centres, using empty office space to support creatives in a time of great need.

They are making blueprints for the site publicly available in hope it will inspire future developments: "We would be delighted if other places stole the idea and emulated it."

"It shows how organisations of all sizes have been able to come together... to unlock something that people once thought would have been impossible."

More than half of the available space at NDT Broadgate will be reserved for global majority and disabled or D/deaf artists.

Four associate theatre companies - Nouveau Riche, Migrants in Theatre, Chinese Arts Now and The Pappyshow - will take up office space there and shape how the space is used.

An-Ting Chang, Artistic Director and CEO of Chinese Arts Now (CAN), said it was exciting to work with New Diorama, "especially with their commitment of reserving 50+% of the space for groups currently underrepresented in the arts".

"CAN will be using this opportunity to bring in more British East and South East Asian artists and we can’t wait to start conversations and collaborate with the other artists in the building."

"Like a huge majority of artists across the world we have struggled over the last year, we’ve had to cancel shows and postpone future projects.

"We aim to fill the rehearsal space with artists that want to bring change, to entertain and create lasting memories that will inspire other journeys."

Byrne said he hoped the associate companies would grow NDT Broadgate's influence beyond New Diorama's normal networks: "These are groups that don't traditionally have the resources to find free space."

Kane Husbands, Founder and Artistic Director of The Pappyshow, said space had always been a barrier and the company's biggest expense.

"As we move out of lockdown, I hope those people who have often felt excluded from theatres and venues can see this as a welcoming - that their work, voice and contribution to our industry is valid, valued and needed."

Byrne added: "The idea for us is for people to use this as a real engine of change. The people we're interesting in working with are those who are going to use those savings [on renting space] to make the kind of change they want to see in the sector."

NDT Broadgate will be involved in a series of pilot projects with the City of London Corporation to restart London's cultural economy and fuel its 'creative renewal'.

While it will be several months before details of the projects are determined, Byrne said the complex's purpose is "hand in glove" with the aims of the city's Culture and Commerce Taskforce, which include securing more spaces for creative work, attracting more investment into the sector and accelerating its digital transformation.

Lord Mayor of the City of London, William Russell, said collaborations like that of New Diorama and British Land will boost the city's recovery.

"We want to promote stronger collaboration between the culture and business sectors, and encourage owners, occupiers, and employers to make unused space available for creatives for mutual benefit."

New Diorama is already working on two public performances - one outside the Broadgate complex and one indoors - and hope to commission more ensemble company work as the space welcomes more users.

With the support of the City of London Corporation, they could create activities that are "greater than the sum of our parts," Byrne said.

David Lockyer of British Land commented: "This exciting partnership... will pave the way for similar projects across the country and abroad."