A series of programmes aligning the capital's cultural and commercial sectors will provide "a ray of hope" - and a major creative showcase. 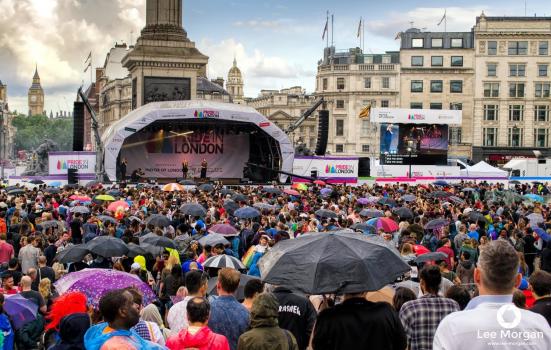 London Pride, 2016. The capital will host a major cultural event to celebrate the city once social distancing is over
Photo:

London will host "a major creative moment" once social distancing restrictions end, potentially coinciding with the so-called Festival of Brexit in 2022.

The capital will pursue a series of programmes aligning its cultural and commercial sectors will boost creativity and economic growth, maintaining its competitive advantage in both fields as the pandemic's impact lessens.

The "moment", understood to be a festival or showcase, is one of 10 projects proposed by the City of London's Culture and Commerce Taskforce in a new blueprint.

These projects are underpinned by a three-point plan to bring London's public spaces to life through creative activity, share knowledge and skills between the cultural and commercial sectors, and develop new spaces for cross-sector innovation.

At a virtual launch event on Tuesday, Lord Mayor of the City of London William Russell said Covid-19 continues to devastate the cultural and creative sectors: "We make no apology for describing the situation as a cultural catastrophe."

"It's critical for culture and commerce to work together in new ways... if we embrace these solutions we can accelerate London's recovery from the pandemic."

Culture Minister Caroline Dinenage described the blueprint as "a ray of hope" for a fuller reopening of the creative sector later in the year.

The major cultural event may also include a planned commissioning scheme to fill public spaces with art and draw visitors into the city.

A mentoring and brokerage model will "animate" empty spaces by repurposing them as creative workspaces, while a central creative hub will be established, potentially in the Smithfield area.

The city will facilitate a creative freelancers network and launch a new campaign encouraging businesses to commission artists for urban and civic works.

"This should provide employment for the creative sector - in particular freelancers - as well as reinvigorating London’s vibracy further by embedding creativity," the taskforce's report, 'Culture and Commerce: Fuelling Creative Renewal', says.

A separate 'Createch' programme will draw on London's potential as a digital "test bed" for the creative sector.

"The tech sector has existing models around these ideas with which the creative sector could be engaged."

Creating the conditions for skill sharing and cross-sector creativity will accelerate London's recovery, the taskforce says.

Networks like the British Council will be called on to forge relationships as part of several international and local programmes focussed on sharing knowledge and building capacity, especially digital skills and business acumen in the creative and cultural sectors.

A flagship event, Creative Skills London 2021, will target school leavers whose employment prospects are limited by the pandemic.

"There is also potential to link this to the Mayor of London’s Initiative for a Creative Skills Academy, London Careers Festival, and London Games Festival," the report says.

Deputy Mayor for Culture Justine Simons said the parts of the creative economy are recovering at different paces.

"Whenever we do these reports I'm always asking 'what does success look like?' For me, success is people flooding back into town, getting back into venues."