Nicky Morgan is Culture Secretary. What does that mean for the arts?

The former Education Secretary has previously expressed support for the EBacc and once claimed that studying the arts is not “useful” for many careers. 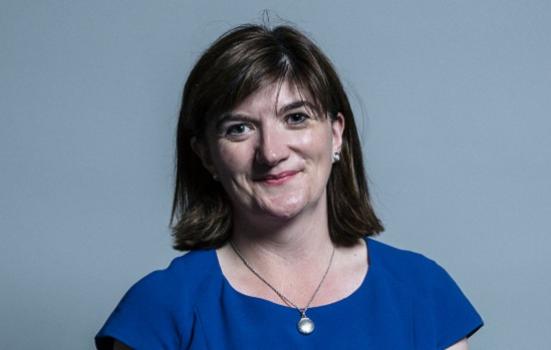 Will Nicky Morgan be a friend to the arts?
Photo:

Her appointment poses an uncertain future for the arts sector: Morgan has previously made conflicting statements about her support for the arts in schools and her voting record raises questions about her responsiveness to concerns about freedom of movement for musicians as Britain exits the European Union.

The MP for Loughborough becomes the eighth DCMS Secretary in nine years, replacing Jeremy Wright, who has been removed from the Government after holding the role for about a year.

Rebecca Pow appears to have retained her arts portfolio as Parliamentary Under Secretary for DCMS. It is not yet known who will replace Margot James as Minister for Digital and Creative Industries after she quit in protest at a potential no-deal Brexit last week.

Morgan on ... arts in schools

As Education Secretary, Morgan was criticised for comments suggesting the arts should take a back seat to STEM subjects: “too many young people are making choices age 15 which will hold them back for the rest of their lives,” she said in 2014.

“If you didn’t know what you wanted to do… then the arts and the humanities were what you chose because they were useful, we were told, for all kinds of jobs. We now know that this couldn’t be further from the truth. That the subjects to keep young people’s options open are STEM subjects – science, technology, engineering and maths.”

Morgan later recast that stance in a 2015 speech, saying that “a young person’s education cannot be complete unless it includes the arts”.

“I firmly reject any suggestion that I or this government think that arts subjects are in any way less important or less worthy than other subjects for study in school.”

Morgan has previously defended the English Baccalaureate (EBacc) as the key to increasing opportunities for young people, particularly those from disadvantaged backgrounds who might have been dissuaded from traditional academic studies.

“I don’t think those who care about the arts have anything to fear from the EBacc”.

Since those comments were made, entries for GCSEs in arts subjects have fallen by more than 20%.

It is unclear how responsive Morgan will be to calls for new touring visas for musicians.

Music industry bodies continued trumpeting concerns this week about the effect a no-deal Brexit would have on musicians’ ability to travel: “Musicians’ livelihoods depend on the ability to travel easily and cheaply with their instruments around multiple countries in the EU for work in a short period of time,” Deborah Annetts, Chief Executive of the Incorporated Society of Musicians, said.

However, Morgan has voted against UK membership of the EU at critical junctures. She has consistently voted for stronger enforcement of immigration rules and has usually opposed the right for EU nationals already living in the UK to stay.

On Twitter, UK Music made pointed comments about the sector’s value: “Congratulations to Nicky Morgan on your appointment as DCMS Secretary! We look forward to working with you! Music’s worth £4.5 billion to the economy with 7% export growth – lots for us to do together to strengthen our sector further.”

In a Twitter post, Morgan said it was “an enormous privilege to take on this fabulous role”.

"[I am] delighted to join and look forward to working with a great team on so many important issues."

However, many online comments suggested her previous statements about the arts indicate she is a bad fit for the role.

Her 2018 claim that she would refuse to serve under Johnson was also discussed at length.

I don’t wholly disagree with your conclusion that Nicky Morgan does not appear to have a particularly positive outlook on the arts. But the more interesting news is that Munira Mirza who was Deputy Mayor for Education and Culture in Boris Johnson’s Team when he was Mayor of London and has written quite extensively about the arts, has just been appointed Director of No 10’s Policy Unit. I don't always agree with what she says. But at least there's someone with extensive arts knowledge and a passion for the arts at the heart of the new Government.