Despite upholding the Government’s decision to exclude the arts from the compulsory EBacc, the Education Secretary has said the curriculum “cannot be complete” without the arts. 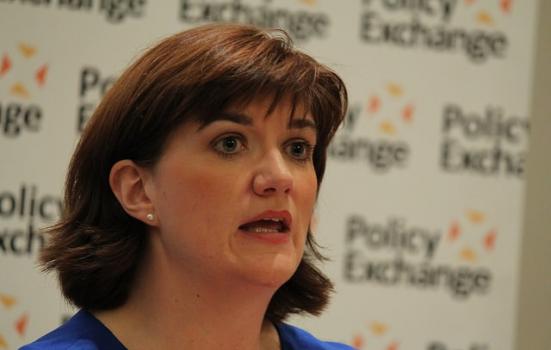 Education Secretary Nicky Morgan has hit back at claims the Government is sidelining the arts in a speech that styled culture as crucial to developing young people’s sense of “Britishness”. Morgan described the arts as “the birthright of every child” and said “a young person’s education cannot be complete unless it includes the arts”. While highlighting moves to make arts subjects “more rigorous,” she assured the arts sector that there is nothing to fear from the English Baccalaureate (EBacc).

Morgan’s statement to the Creative Industries Federation follows a controversial speech in November last year, in which she insinuated that STEM subjects (science, technology, engineering and maths) open more doors for young people than the arts and humanities. She used her speech this week to respond directly to the media uproar that ensued, saying: “I firmly reject any suggestion that I or this government think that arts subjects are in any way less important or less worthy than other subjects for study in school.”

Since Morgan’s speech in November, the Government has announced that the EBacc – a set of subjects that does not include the arts – will be compulsory for GCSE pupils. The move has raised concerns in arts and education circles, with a campaign to “save creativity in schools” receiving backing from over 125 organisations, including the Association of Teachers and Lecturers.

Morgan defended the move, saying EBacc subjects are key to increasing opportunities for young people, particularly those from disadvantaged backgrounds who have traditionally been told that these subjects (science, English, maths, geography, history and foreign languages) are not for them. She said: “What that doesn’t mean is that these are the only subjects that we value or the only subjects that matter. I would expect any good school to complement these subjects with a range of opportunities in the arts.”

But Morgan’s reassuring words – “I don’t think those who care about the arts have anything to fear from the EBacc” – appear to have fallen short. Responding to the speech on his blog, Educationalist Martin Robinson said: “Why she can’t make the easy step to make an arts subject a compulsory part of the Ebacc I’ve no idea… this would be the most obvious way to show the Government values the arts.” Marcus Davey, Chief Executive and Artistic Director at the Roundhouse, was “encouraged” to hear Morgan’s reassurances, but said the arts “cannot be an add on to the core curriculum”. While a secondary school English teacher took to Twitter to respond, writing: “@NickyMorgan01 believes the arts are essential can you ask her when we’ll have the time to teach it?”

Others were more welcoming of the Education Secretary’s speech. The Royal Drawing School said it was “great” to hear about a new emphasis on drawing in art and design classes. And Alan Cameron, Education Officer with Dumfries & Galloway Council, wrote on Twitter: “Pleased to hear @NickyMorgan01 say today ‘a young person’s education cannot be complete unless it includes the arts’”.

The Education Secretary Nicky Morgan needs to review her statement in relation to the proposed EBacc being the key to creating opportunities for young people, especially the disadvantaged, considering that the creative & cultural industries currently make an enormous contribution to the GDP and are the fastest growing industries, as highlighted in the reports launched last week by the Arts Council England and the Creative Industries Federation. Excluding the arts from the EBacc will result in undermining the work of the sector, which has taken over three decades to encourage more young people to explore the arts as a career option, with the support of their parents and teachers. It is a disadvantage to the economically and socially challenged young person NOT to have the choice of the Arts, alongside the traditional EBacc subjects selected. Creative thinking is integral to the traditional subjects and therefore the Arts form an essential part of the EBacc.

Schools Minister makes “no apology” for sidelining the arts