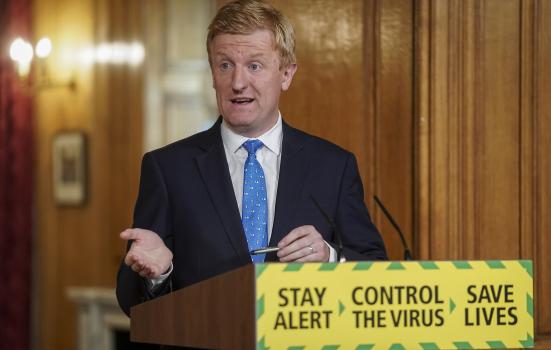 Culture Secretary Dowden, pictured here at a June press conference, has yet to respond to any of the DCMS Committee's recommendations
Photo:

The arts and cultural sector needs "clear guidance" now to ensure it survives the next six months, MPs have told DCMS.

Prime Minister Boris Johnson's announcement this week that extended social distancing measures will likely last until March has poured cold water on hopes the sector might reopen at capacity by Christmas.

DCMS Committee Chair Julian Knight wrote to Culture Secretary Oliver Dowden on Wednesday, imploring him to give a 'no earlier than' date for the final stage of his roadmap to recovery and provide funding to equip venues to reopen when it is safe to do so.

"If the current restrictions are likely to remain in force for six months, what will happen after this date?"

He expressed a lack of confidence among MPs on the committee: "We are concerned that Government plans rely too heavily on the hope that a vaccine to enable the safe return of live audiences and sports crowds will be developed in time to make a difference."

“However this [postponement] has created an opportunity for ministers to develop a robust strategy that will allow for the safe return of audiences to events – particularly in our theatres and performance venues – when the time is right."

Even if a provisional reopening date cannot be provided, there is more DCMS can – and should – do, Knight said.

His letter said a return to business-as-usual for the sector would be more likely if "development, testing and implementation of public health measures to mitigate the need for social distancing" were higher priorities for public health authorities.

"The Prime Minister and Health Secretary have stated that mass testing could facilitate the return of audiences prior to the development of a vaccine.

"However, we are concerned that Government action on this has been slow and un-coordinated."

The Committee recommended that DCMS ensure the "interests and expertise of the performance and events sectors" are considered when developig mass testing programmes.

It also called for DCMS to provide clarity around what public health conditions and social distancing measures will be required for venues to reopen fully.

DCMS pointed to numerous emergency funding schemes and said it is already "working at pace with the sector" to develop safe ways of resuming full capacity shows once infection rates fall to safe levels.

"We have always been clear that moving forward with the performing arts roadmap was dependent on the prevalence of Covid-19," a spokesperson commented.

Many arts workers face redundancy – and even those not at immediate risk will wonder whether to leave the sector, actors' union Bectu says.

Union Head Philippa Childs said another six months without audiences "could be the final nail in the coffin for many institutions unless the Government takes further properly targeted action".

She said there must be further sector-specific supports such as subsidised tickets and Government insurance for live events.

"If the Government does not take immediate steps in this area we may not have a functioning theatre and events sector to return to when this is finally over."