AP looks at the promises set out in party manifestos. This week: Labour, Liberal Democrats and Green Party 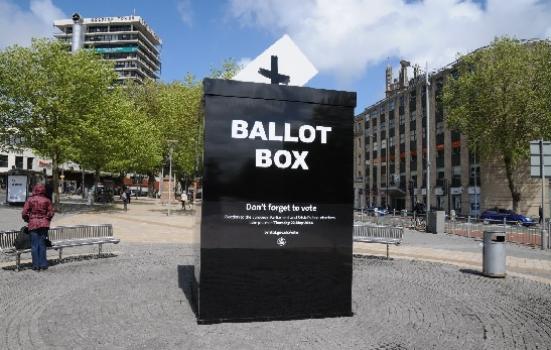 A public artwork reminding people to vote in Bristol in 2014
Photo:

With all parties vying to secure news headlines for their election priorities, the UK’s £101bn creative and cultural sector comes some way down the list.

AP has taken a look at how these pledges appear in their manifestos.

Labour has stayed close to policies that have already been shared in previous manifestos. What’s new is its commitment to establishing a £1bn Cultural Capital Fund for transforming libraries, museums and galleries in towns that the party says have been “neglected for too long”. The party has also promised:

The party’s 2017 manifesto promise to reverse arts funding cuts is nowhere to be seen in the 2019 reboot. In the last election manifesto, Leader Jeremy Corbyn said Labour would redress “real term cuts to arts expenditure and restore grant-in-aid funding of the Arts Council”.

Labour’s pledge to fund universal arts education in primary schools isn’t new: it was first promoted under Ed Miliband’s leadership in 2015. Its other cultural policies that year included increasing the number of apprenticeships in the creative industries through a Prime Minister’s committee, and a broad unspecified commitment to “work with public bodies to rebalance arts funding across the country”.

Recognising the value of tourism, the Liberal Democrats have proposed to introduce a Minister of State for Tourism to DCMS

Culturally minded policies in the Liberal Democrats' 2019 manifesto include:

The Liberal Democrats’ 2017 manifesto also mentioned a plan to “protect” National Lottery funding for the arts – but neither document suggests increases in Government grant-in-aid.

Some of the party’s historic proposals have been dropped:

•    It is no longer promising a £2bn Rural Services fund that might have been directed in part to communities’ cultural offer following the 2018 election and, significantly,
•    It has omitted plans set out in both 2015 and 2017 to creative enterprise zones to “grow and regenerate cultural output” across the UK – a reflection perhaps that this initiative is firmly underway, albeit only in London.

The party’s statement about protecting live music is a repeat of a 2017 campaign promise.

The Green Party’s support for arts and culture policies has traditionally been strong and explicit.  The latest manifesto pledges focus on improving access to culture via welfare and economic supports, rather than direct interventions.

Its key cultural policies are:

•    Reduce VAT on theatre, concert, museum and gallery tickets to “boost the leisure and cultural sectors”
•    Ensure gig economy workers get sick leave, holiday pay and other entitlements
•    “Restore” arts and music education in all state schools
•    Reform copyright and intellectual property legislation so creatives are “protected from commercial exploitation”

The party has also proposed an extra £10bn per year for local authorities – money it says could be used to “nurture” arts and culture and keep local arts and cultural organisations open – and remains committed to its historic promises to scrap undergraduate tuition fees and introduce a universal basic income (£89 per week).

Missing from this year’s manifesto, from previous pledges in 2015:

•    A commitment to increase Government arts funding by £500m per year and move funding “from the regional to the local level” to better support small-scale live performance.

Next week AP will round up of cultural manifesto pledges from Plaid Cymru, SNP, the Brexit Party and Conservatives.