New figures from the Department for Education show the number of arts, media and publishing apprentices has fallen by a third since 2015 – but the data doesn’t tell the full story. 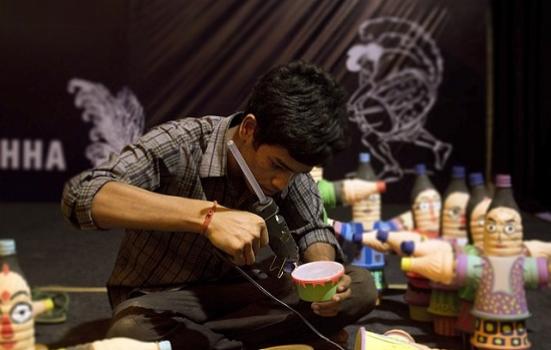 Participation in creative apprenticeships has fallen by a third over the past three years, data released by the Department for Education (DfE) shows.

This makes creative apprenticeships the fastest-declining apprenticeship group by sector, outpacing uptake of retail and commercial enterprise apprenticeships, which has fallen by 30% since 2014/15, and an average decline of 7% across all sectors.

By comparison, participation in leisure, travel and tourism apprenticeships has dropped 9% over the same period, business, administration and law by 7%, and health, public services and care by 6%.

However, Creative and Cultural Skills England Programme Manager Sara Whybrew says this data does not capture apprentices working in creative businesses, but not creative pursuits: “we do have a proportion that are apprenticeships in administration … quite a big proportion of job opportunities [are] created by this sort of route.”

While participation in apprenticeships has declined generally, there are some problems specific to the creative industries that have hampered uptake.

Whybrew says a reform of the national apprenticeships framework in 2017 created positive opportunities to develop more industry-led programmes, but has also caused this statistical “fall out”: “we have got a fundamental problem here that employers can go ahead and develop a new standard … but it doesn’t guarantee that a training provider will take it on.”

Many creative businesses are small-to-medium sized enterprises, and the standards – for example, in puppet making – can be highly specialised, leading to hesitation on the part of training providers seeking economies of scale.

“We have had training providers say, ‘we can’t run this training option if we don’t have X number of students’. Our sector is never going to work in that way,” Whybrew says.

She notes a need to look at the sector “as a whole, rather than [taking] a place-based approach” and pursue flexible delivery options like online learning.

Whybrew adds that the introduction of an apprenticeship training levy system has been difficult for some creative businesses.

Most are not subject to the tax – it only applies to employers with a pay bill exceeding £3 million per year – meaning that they must instead make a 5% contribution towards their apprentice’s training costs.

This can be a barrier to small businesses taking on apprentices, but the greater barrier is perhaps a lack of willingness, Whybrew says.

“Because the system has changed, we have seen that employers don’t necessarily understand the systemic changes and think it’s too hard to take on an apprentice."

She added the arts are "a graduate-heavy sector" and attitudes towards apprenticeships needed to change to increase participation.

DfE’s figures indicate diversity drives within the sector have had minimal impact on apprentice numbers. The proportion from Black, Asian and mixed ethnic backgrounds starting apprenticeships – 14.4% in 2017/18 – has grown by just 1.5% over the past three years.

Whybrew says employers are using apprenticeships to upskill current staff or hire people they otherwise would have taken on as a graduate.

She says employers need to consider diversity initiatives from the outset: “we have seen employers saying ‘let’s use this [apprenticeship] as an opportunity to bring someone in – and then they hire to type again.”

She adds: “The cultural sector is really quite elitist in who it recruits and that is voiced in the demographic make-up of the workforce.”

Correction: An earlier version of this article incorrectly stated the data at issue came from DCMS. The figures were compiled by the Department for Education.