Disadvantaged groups could miss out on future university places as creative degrees fail to feature in funding for “strategic priorities”. 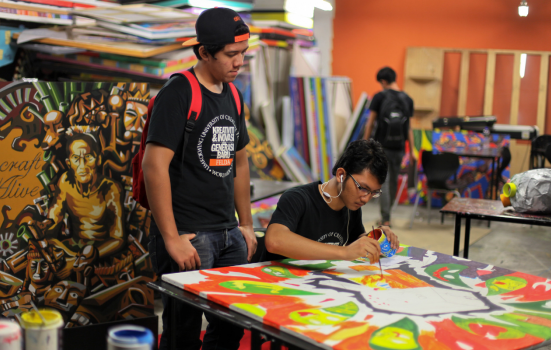 The proposals, outlined in a Department for Education’s (DfE) review of higher education funding now open for consultation, aims to encourage students onto pathways they can excel in.

“[They] will significantly disadvantage many, barring them from a transformational creative education”.

If plans go ahead, students who do not achieve Grade 4 English and Maths (equivalent to a C) would be barred from taking out Government-backed student loans, a threshold about a third of pupils do not meet annually.

DfE estimates the rule change would affect 4,800 students. It says an equivalent proposal aimed at those who fail to achieve two Es at A Level would affect 6,200. Mature students with historic grades would not be affected.

The department did not respond to ArtsProfessional’s question asking how creative degrees that do not require minimum GCSE grades in English or Maths, or certain requirements at A-Level, would be affected.

Its plans would likely increase competition for degree places at a time when applications to universities continue to rise.

According to UCAS data, total applications to university places increased by 4.9% this academic year. Last year, creative degree applications rose to their highest level in a decade.

Norbury says the introduction of minimum requirements would be “worrying”.

“It is imperative that the creative sector continues to diversify and grow its workforce, ensuring that the chance for talent to flourish is open to all, not just the privileged few.”

The DfE is moving closer to capping admissions to certain degrees after Government ministers mooted the idea last July.

Presented as way to prevent a ‘race to the bottom’, the consultation says caps could be implemented unilaterally or set differently for individual providers.

Thresholds are likely to be based on quantifiable course outcomes including graduate salaries, which would be “too narrow to accurately or fairly reflect the success of the UK’s talented creative graduates,” according to Norbury.

She says broader social and economic outcomes, which the consultation says would factor into any caps on education and healthcare degrees, must also be taken into account for creative courses.

“Seeking to implement student number controls in particular course areas which are not currently deemed strategically important would severely limit the types of skills businesses tell us that they need and could leave us ill-prepared for the challenges of tomorrow.”

A lack of tailored funding for music and arts courses could threaten their future status and viability, according to the Musicians Union (MU).

The DfE’s report slates £900m for its strategic priorities, with £750m earmarked for science, engineering and subjects that support the NHS. No funding for creative degrees is mentioned.

The MU’s National Organiser for Education Chris Walters says it is “depressing” to see the Government’s continued rhetoric around strategic priorities after funding for arts degrees was halved and an arts premium shelved last year.

“We must now redouble our efforts to challenge the Government on its total disinterest in much of the UK’s excellent music and arts higher education training provision.”

He adds that minimum qualification requirements for student loans are likely to affect MU members and professional musicians in the future.

“Once again we see the Government closing the door to wider access rather than opening it.”