Confirmation of the higher arts education cuts comes as applications to study these subjects reach their highest level in a decade, placing the sector's talent pipeline at risk. 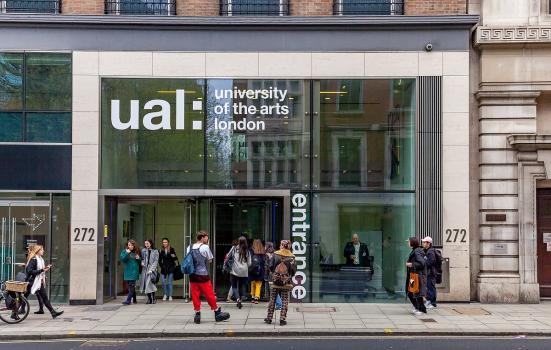 Arts universities in London will lose the greatest proportion of per-student funding
Photo:

A 50% cut to per-student funding for creative and performing arts degrees is “one of the biggest attacks on arts and entertainment in English universities’ living memory”.

University and College Union General Secretary Jo Grady was among those to decry the “drastic cut” confirmed by the Office for Students (OfS) on Tuesday.

Cuts remain in line with those proposed in May except for archaeology, which was spared after Secretary of State Gavin Williamson identified the subject as “strategically important”.

Creative arts, performing arts and media studies will now receive £18m in per-student subsidies in 2021/22, 1.2% of OfS’ total planned distribution and a 49% reduction on this year’s grant.

“This announcement undermines the huge contributions the creative arts sector makes to society and the wider economy,” Grady said.

The decision comes as data from the Universities and Colleges Admissions Service (UCAS) shows applications to study creative arts and design degrees have reached their highest level in a decade.

Responses to OfS’ consultation noted how damaging the cuts could be to England’s talent pipeline long term. 95% of submissions “strongly disagreed” with the proposals but OfS said these concerns were irrelevant.

Williamson directed the office to cut funding for high-cost creative subjects as a condition of its own funding.

“If we do not, we may be required to repay the whole or any part of the grant still held by us to the Department of Education,” OfS said.

“We must ensure that the talent pipeline doesn’t dry up. Closing opportunities to learn music is short-sighted, and at the end of the day we’ll all suffer.”

Nearly 256,500 people applied for the next academic year – the highest figure since 2011. That was the year before maximum tuition fees increased to £9,000.

Creative arts and design degrees are now the fourth most popular course of study after social sciences, business and medicine-related degrees.

Degrees in communication and media and humanities and liberal arts degrees also saw an increase in applications on the previous two years.

Director of Centre for Cultural Value Ben Walmsley said it is “heartening” to see an uplift in applications.

“At a time when creative arts subjects are coming under attack at all levels of our education system, it is fascinating to see demand for these vital courses on the rise.

“The pandemic has clearly highlighted the positive role that arts and culture play in people's lives and students' growing interest in creative arts and design seems to be a logical outcome of its lasting impacts.”

University of Kent Arts and Humanities Co-Director Professor Simon Kirchin said the institution has received "large and growing interest in our arts programmes from prospective students".

‘A body blow’ for London

Creative universities in London will feel the cuts the most as Williamson has also ended targeted funding for London-based students.

“With our home borough of Lewisham being among England’s poorest areas, the withdrawal of this funding looks more like punching down than levelling up.”

Goldsmiths estimates its activities generate £91m for Lewisham annually. The area is set to become London Borough of Culture in 2022.

Director of Student Recruitment James Ringer said Goldsmiths’ application process had been “as competitive as it usually is” this year.

“UCAS admissions data shows that the type of creative and critical education Goldsmiths provides continues to be in high demand,” he added.

OfS said it expected institutions to manage this risk: "Providers have scope within the overall resources available to them, including both course fees and OfS student premium funding, to target support to those most in need."

Cuts to London weighting, a type of student premium funding, are expected to total £64m.

University of the Arts London (UAL) are set to lost £3.8m, 70% of its high-cost course funding, according to OfS modelling.

"In the long term, creative education in the UK as a whole will suffer a decline in quality, preparation and places for UK students, as a result of these cuts," a UAL spokesperson said.

"This undermines the government’s commitment to the creative industries."

OfS’ received an “unprecedented” response to its consultation on the funding reforms after a last-minute campaign to assert the economic and social value of creative subjects.

But the authority said it remains “entitled to form its own conclusion independently of the view of any particular consultees”.

The OfS acknowledged concern around the cuts but said respondents did not “suggest alternative approaches to how our fixed budget should be distributed in a way that would strike a balance between different priorities”.

Requests to hold a separate consultation on arts funding were rejected due to their “inextricable link[s]” with other proposals.