The quiet suspension of the election pledge is "sadly another example of the disregard shown by the Department for Education towards creative subjects". 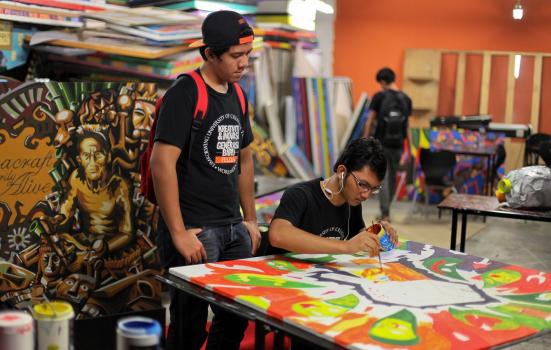 Future funding for the policy is now uncertain
Photo:

A £270m arts premium for secondary schools appears to have been shelved due to Covid-19 pressures.

Schools stood to receive up to £25,000 each per year starting this month but the policy - a Conservative Party election pledge - has been put on hold.

Outgoing Schools Minister Nick Gibb said future funding for the premium, including £90m earmarked for 2021, is under review.

"Due to the focus on new priorities as a result of the Covid-19 outbreak, the arts premium is now subject to this year’s Spending Review."

His confirmation follows months of questioning from Labour MPs and music educators and comes amid a 50% cut to student premiums for higher education in the arts and a persistent decline in creative A Levels that has researchers worried the qualification could disappear from some regions altogether.

The Department for Education said it could not confirm whether the policy has officially been scrapped.

"That no official statement was made on the premium, despite it being a manifesto and budget commitment is sadly another example of the disregard shown by the Department for Education towards creative subjects in recent years," Incorporated Society of Musicians Chief Exeutive Deborah Annetts said.

"Creative education enriches the lives and learning of students, but all too often schools don’t have access to sufficient funding to be able to deliver high-quality education in subjects such as music.

"The arts premium would have gone some way to address this imbalance and there will be students who miss out because of it."

'No support' for drama

Teachers had already started planning how to use the premium in their schools, according to National Drama.

The UK's professional association for drama education wrote to Gibb to express its "disappointment and concern" that the first year of funding has not materialised.

"Whilst we acknowledge that the Government have had to make difficult decisions regarding where to prioritise funding for educational recovery, we find it extremely disheartening and short-sighted that there is a lack of support for the arts."

Gibb has evoked £80m in funding for music education hubs as proof of the Government's commitment to arts education, but National Drama notes there is no such support for its members.

The association is sceptical that schools, needing to prioritise catch up in core subjects, will spend their share of a £1.4bn recovery package on the arts.

"The funding is simply not enough and the support is not there to allow the arts to have a place in educational recovery."

In fact, there has been a 38% decline in entries over the past decade, alongside a 31% drop in arts A levels.

The Royal Society is also warning of a "narrowing" of the curriculum at A Level, with students studying a less diverse range of subjects than 10 years ago.

National Drama's members report that GCSE options have reduced and students have missed out on practical arts teaching during the pandemic.

"Uptake has significantly decreased due to students not having experienced arts subjects properly since 2019," the associaton said.

There are "mixed messages" from Government about its support for arts education, its letter adds.