Arts workers turn to higher education to upskill during Covid-19

An upward trend in people studying postgraduate creative courses in 2020 and 2021 suggests arts workers aren't looking to leave the sector. 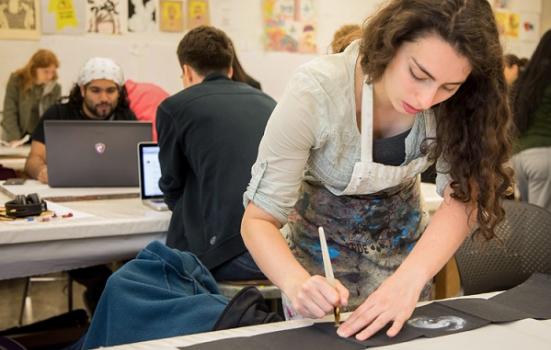 Arts workers are returning to postgraduate study - but undergraduate numbers are in steep decline
Photo:

Arts professionals are turning to higher education to upskill rather than retraining for jobs in other industries, new research indicates.

Analysis by the Centre for Cultural Value shows a 5% increase in workers in the core creative industries - publishing, museums, galleries, libraries, music, and the recorded, visual and performing arts - enrolling in arts education in 2020 and 2021.

It's a small change but"the uptick in the numbers suggests a clear response to the sector's economic crisis," even when the shrinking of the arts workforce is accounted for, researchers say.

While there has been an increase in creative workers studying social sciences (about 5%), this appears to have come largely at the expense of the humanities, which has fallen slightly in popularity.

The finding throws assumptions the creative sector would face a talent drain due to Covid-19 into sharp relief: the data indicates, but does not definitively prove, that freelancers are upskilling via arts and social science courses.

"Potentially we may have a better qualified [or] skilled, but smaller in terms of job numbers, sector," researchers Dr. Dave O'Brien and Professor Ben Walmsley, Director of the Centre for Cultural Value, commented.

"So that may be a talent drain - fewer workers, especially fewer younger workers - or it may not - a higher skilled, smaller workforce.

"It depends on how you define a talent drain."

Sara Whybrew, Director of Policy and Development at Creative & Cultural Skills (CCSkills), said it was great to see people upskilling but that academic routes "aren't right for everyone or indeed for all of the jobs we need people to do".

"If our sector is to build back fairer, we must use a range of routes, academic and technical [or] vocational to help the broadest pool of talent step into our workforce."

Turning to higher education is a common response to economic crisis, and the well-documented collapse in working hours and jobs for creative workers makes them the perfect candidates for upskilling or retraining.

But the research report, coyly titled 'Fatima's next job won't be in cyber' in reference to the ill-received public marketing campaign, makes clear that "creative workers are not turning in big numbers to other fields of study to train themselves in alternative occupations".

The research says that while the pandemic "does seem to have pushed many creative workers to think about their professional future", their focus appears to be preparing to return to work.

"Although these findings may seem optimistic and imply that creative workers trust the resilience of the creative industries, it is important to be careful with these conclusions."

While postgraduate enrollments are growing, interest in undergraduate arts study has declined by about 20% over the past year, which could herald the beginning of a longer-term trend - and longer-term talent drain.

"Concerns about a 'lost generation' of younger early career cultural workers leaving the sector are crucial too," the research report notes.

"Education is not equally accessible to all. Increased enrollment in education might exacerbate inequalities in the creative occupations."

It's important to ensure any fallout from Covid-19 doesn't "further perpetuate homogeneity" in the cultural sector, she added.

The increase in arts education enrollments is not confined to arts workers: there has been a very slight increase in people in other occupations enrolling on arts-focussed courses, bucking a pattern of decline over recent years.

Because the total number of workers enrolled in 2020 is higher than in previous years, even a slight uptick represents a larger increase in students overall.

Plans to cut grants for creative arts courses by 50% won't directly affect the growing numbers because they are per-student subsidies.

But O'Brien and Walmsley said the proposal "represents a worrying Government trend in support of STEM subjects that doesn't acknowledge the significant contribution that the cultural and creative industries make to the economy".

"In other words, support for the creative industries requires support for arts and humanities degrees."