Support spans the political spectrum, placing pressure on the Government to abandon its plan for a 50% funding cut. 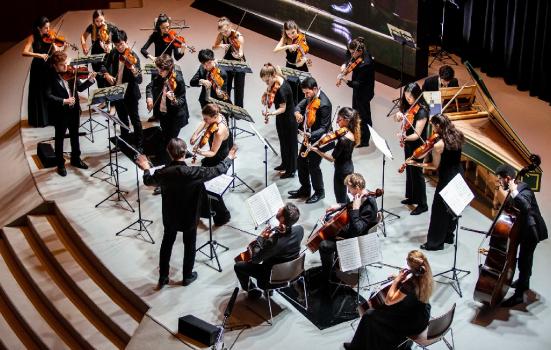 Performing arts courses are among those at risk of a severe funding cut
Photo:

Most people support continued funding for arts courses in higher education, a new poll says, against plans to halve their funding.

The 1,700-person YouGov survey found 57% think it's important to maintain funding for creative and performing arts courses versus 31% who don't. 70% said it's important students have the choice to study creative subjects.

Public Campaign for the Arts (PCA), which organised the poll, said it increases pressure on Education Secretary Gavin Williamson to revisit a proposal to reduce universities' arts funding by £17m in September.

Campaign Director Jack Gamble said "this poll is proof that to most people in Britain, arts education matters", while Head of Strategy Nicholas Pitt said these courses must be "properly supported" to remain viable and accessible.

An additional £10m has been made available for specialist arts providers, including most drama and music conservatoires, although this wouldn't make up for the proposed funding cut.

A petition against the change was approaching 166,000 signatures on Wednesday.

PCA and organisations across education and the arts are increasingly challenging the Government's view that the creative arts are not a "strategic priority", citing the creative industries' outsized economic contribution.

Creative education is not only key to the creative industries "but also a catalyst in other such as healthcare, local services, sustainability and regeneration," he added.

“It’s staggering to hear those who should know better declare that students should only study subjects that lead them directly to employment.

"Isn’t it blatantly obvious that the future needs to be holistic, with every area of society contributing towards an economically, socially, mentally, emotionally and spiritually healthy nation?"

A recent skills ranking by 2000 businesses rated the soft skills imbued by arts education as critical to the UK's future economy.

Creativity was ranked 8th place, with 56% of respondents citing it as a a key skill. Problem solving was first place (77%), followed by communication skills (66%) and critical thinking (64%).

The 'Future Skills Report', boiling these skills down to innovation, recommended the Department for Education develop a creative and innovation skills strategy that "promotes strategically important creative subjects and skills".

Regulators should "incentivise and reward" education providers that align these subjects with business' needs, it adds.

The method the Office for Students is proposing to measure the value of different degrees is based upon whether students finish their course and how many are in professional employment 15 years later: "Creatives and start-ups often don’t have that career trajectory," a Kingston University spokesperson said.

Creative degrees are "a valuable place where logical, social, creative, intuitive as well as analytical thinking comes together," the spokesperson added.

"Sadly, it is increasingly the case that access to a meaningful creative education is the preserve of a privileged minority," he said.

"It is undervalued and therefore underfunded, meaning fewer and fewer young people are given the opportunity to develop these much-needed skills.”

The people most likely to lose out if creative education funding is cut are also those who prize it the most, PCA's poll indicates.

60% of people in the lowest socio economic grades and 78% of 18-to-24 year olds said the ability to choose a creative course of study mattered to them.

Enthusiasm for funding the arts in higher education was apparent in all regions of the UK, the poll showed, although it was highest in London at 68%.

Support was also highest among Labour voters - 43% said maintaining funding was "very important to them; another third said it was fairly important.

However, 61% of Conservative voters supported maintaining current funding levels, although only 11% said this was very important.

Stories of racism at the Barbican 'ring true', Gompertz says

Monday, 25 October 2021
Stories of institutional racism at the Barbican Centre "ring true to me", Will Gompertz has said. The Interim Managing Director, promoted following Nicholas Kenyon's resignation in June, told The... read more
(The Times)

Monday, 25 October 2021
A petition urging the Government to keep manifesto promises around arts funding for young people has received more than 20,000 signatures online. The petition comes ahead of Wednesday’s (October 27) ... read more

Monday, 25 October 2021
British robot artist Ai-Da has opened an exhibition and sculpture trail at Egypt’s pyramids after being held up at the country's border for 10 days. The world’s first artificially intelligent ... read more
(artnet News)